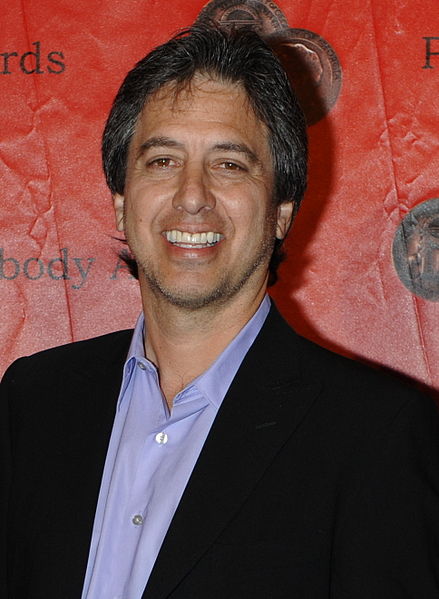 Raymond Albert Romano (born December 21, 1957) is an American stand-up comedian, actor and screenwriter. He is best known for his role on the sitcom Everybody Loves Raymond, for which he received an Emmy Award, and as the voice of Manny in the Ice Age film series. He created and starred in the TNT comedy-drama Men of a Certain Age (2009-11). From 2012 to 2015, Romano had a recurring role as Hank Rizzoli, a love interest of Sarah Braverman in Parenthood, and co-starred in the romantic comedy The Big Sick (2017).

Romano was born in Queens, New York, the son of Lucie (née Fortini), a piano teacher, and Albert Romano (November 7, 1925 - March 11, 2010), a real estate agent and engineer.[2][3] He is of Italian descent.[4] He grew up in the Forest Hills neighborhood of Queens.[5] He has an older brother, Richard (born in 1956), a sergeant with the NYPD, and a younger brother, Robert, a second grade teacher in New York City.[6] Romano married his wife, Anna Scarpulla, in 1987. They met while working at a bank together.[7] They have four children.

Romano's character's daughter on Everybody Loves Raymond was named after his real-life daughter. Also, in the series pilot, Ray and Debra's twin boys were named Gregory and Matthew, after Romano's real-life twin sons, but Romano felt it was inconvenient to have all his TV children have the same names as his real children, and changed the twins' names to Geoffrey and Michael on screen. He also said his brother was not pleased with Ray Barone's TV brother.[8]

Romano's family has made various appearances in the show. Romano's real-life daughter Alexandra "Ally" Romano made several appearances on Everybody Loves Raymond as Molly, the best friend of his on-screen daughter, Ally, and the daughter of Ray Barone's nemesis, Peggy the Cookie Lady. Romano's father, Albert Romano, has made various appearances as Albert, one of Frank Barone's lodge buddies in various episodes such as "Debra at the Lodge", and "Boys' Therapy". Romano's brother, Richard Romano, appeared in the episodes "Golf For It", "Just a Formality" and "The Toaster". Romano's wife Anna appeared as one of the moms in the background at Geoffrey and Michael's school in season 6's episode titled "The Angry Family."

In February 2012, Romano revealed that his wife Anna had successfully battled stage one breast cancer in 2010. Romano told People magazine that "the reason we're going public is to share our experience, yeah, but to have an effect. Our goal is to help people."[9]

Romano also remained close to Doris Roberts, who played his character's mother on Everyone Loves Raymond. At the time of her death, Romano said he was inspired by her desire to continue learning throughout her life. She also served as a mentor, helping him to feel more comfortable on set.[10]

Romano attended elementary and middle school at Our Lady Queen of Martyrs in Forest Hills. After transferring from Archbishop Molloy High School, Romano graduated from Hillcrest High School in 1975.[11] He was in the same high school class as Fran Drescher. Before getting into show business, Romano briefly attended Queens College, in Flushing, New York, where he studied accounting.[7]

His early comedy career started when he competed in the Johnnie Walker Comedy Search in 1989 directed by Saturday Night Live short film producer Neal Marshad and appeared on The Comedy Channel. His career included many outlets, such as Comedy Central, where he had been a recurring guest voice on the show Dr. Katz, Professional Therapist. He also was a contestant on Star Search in the stand-up comedy category. He originally was cast to play Joe (originally named Rick) on the American television sitcom NewsRadio, but was fired and replaced by Joe Rogan. He then appeared on Late Show with David Letterman doing his stand up routine which formed his ties with CBS. Shortly thereafter, he became the star of his own show, Everybody Loves Raymond on CBS, that featured a cast and format more suitable to Romano's brand of humor. His work on the series earned him six Emmy nominations, winning in 2002, as well as five Screen Actors Guild Award nominations and two Golden Globe Award nominations.

Romano and his comedian best friend Kevin James starred in the salesman comedy Grilled as two Average Joes of the same profession who are both desperate to land a big sale.

In 2001, Romano was named one of E!'s top twenty entertainers of the year. That same year he was featured with his brother (a teacher at a school in Long Island) on a New York Police Department recruiting poster.

In 2004, he became the highest-paid television actor in history for his role of Raymond on CBS's Everybody Loves Raymond. It was later revealed on E! that the show had broken another record by having the highest revenue, at $3.9 billion.

On December 13, 2003, Romano was featured as a special guest star, sending a birthday card to Bob Barker in his 80th birthday bash on the 27th "Million Dollar Spectacular" special of the long-running daytime CBS series The Price Is Right.

Romano was the subject of the documentary film 95 Miles to Go. The film documents Romano's road-trip for a series of rides across the south of the United States. The film was released in theaters on April 7, 2010, by ThinkFilm.[12] In August 2006 Romano was interviewed in front of a live audience at UCLA by fellow stand-up veteran David Steinberg, for an episode of Sit Down Comedy with David Steinberg. The program first aired on the TV Land network in March 2007.

Romano returned to television with a new dramedy for TNT in 2008, Men of a Certain Age, which he co-created with former Everybody Loves Raymond writer Mike Royce. It co-starred Scott Bakula and Andre Braugher.

Romano made an appearance in the seventh season of NBC show The Office as Merv Bronte, a nervous job applicant interviewing for the job left vacant by Michael Scott.

Romano made an appearance in the third-season premiere of ABC sitcom The Middle as Nicky, a friend of Mike, who ruined his and Frankie's honeymoon. Romano was the second actor from Everybody Loves Raymond to be reunited with Patricia Heaton on The Middle. Doris Roberts guest-starred in three episodes.

He joined the cast of Parenthood beginning September 11, 2012.[13][14] He became a semi-regular, playing photographer Hank Rizzoli, who hired and later had a romantic relationship with Sarah Braverman and developed a friendship with her nephew who has Asperger syndrome. The role was specifically created for him after he expressed his love for the show and met with creator Jason Katims on the set of Friday Night Lights.[15]

Currently, Romano is a lead on the Epix comedy series Get Shorty.

Romano at the 2010 World Series of Poker main event

In early 2010, Romano starred in the second season of The Golf Channel's original series The Haney Project in which Tiger Woods' former coach Hank Haney attempts to improve the golf games of different celebrities and athletes. Romano's goal was to finish the show being able to break 80.[16] Romano took time off from the show to be with his father, Albert Romano, who died in March 2010. Romano is also a regular competitor in the AT&T Pebble Beach National Pro-Am, where he finished fifth in 2012 with his partner, Australian professional Steven Bowditch. It was the first time Romano had qualified for the final round after failing to do so on 11 successive occasions. He also competes annually in the American Century Championship, a celebrity golf tournament owned by NBC and held at Lake Tahoe[17][18] each July.

In addition to his roles as star and producer of Everybody Loves Raymond, Romano also co-wrote the following episodes:

Men of a Certain Age

Report a problem
Write to Ray Romano at FanPal • 2023