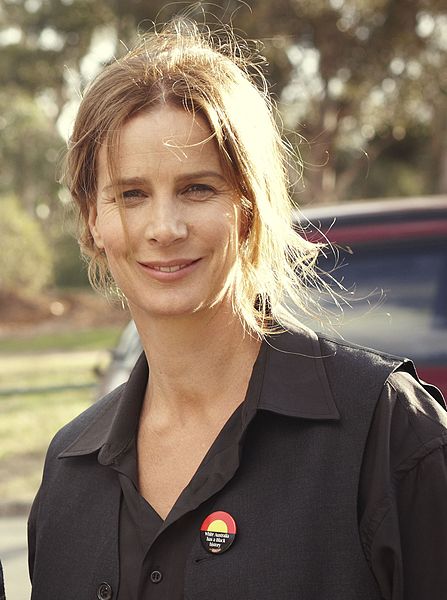 Rachel Anne Griffiths (born December 18, 1968)[b] is an Australian actress and director. Raised primarily in Melbourne, she began her acting career appearing on the Australian series Secrets before being cast in a supporting role in the comedy Muriel's Wedding (1994), which earned her an AACTA Award for Best Actress in a Supporting Role. She would garner further international recognition for her role opposite Julia Roberts in the American romantic comedy My Best Friend's Wedding (1997), followed by her role as Hilary du Pré in the biopic Hilary and Jackie (1998), for which she was nominated for an Academy Award for Best Supporting Actress.

From 2001 to 2005, Griffiths portrayed masseuse Brenda Chenowith in the HBO series Six Feet Under, for which she earned a Golden Globe Award for Best Actress in 2002. She would subsequently appear on television as Sarah Walker Laurent on the ABC drama series Brothers & Sisters from 2006 to 2011, for which she was nominated for multiple Primetime Emmy Awards.

She has also had roles in the films Blow (2001), portraying the mother of George Jung; the historical drama Ned Kelly (2003); Step Up (2006), and the Julian Assange television biopic Underground: The Julian Assange Story (2012). In 2016, she appeared in a supporting role in Mel Gibson's biographical war drama Hacksaw Ridge, and in the docudrama miniseries When We Rise, written by Dustin Lance Black.

Onstage, Griffiths appeared in a Melbourne-based production of Proof in 2002, which earned her a Helpmann Award, and later made her Broadway debut in a 2011 critically acclaimed production of Other Desert Cities. In addition to acting, she made her directorial debut with the short film Tulip in 1998, and has directed several episodes of the Australian television series Nowhere Boys and the British drama series Indian Summers in 2015 and 2016, respectively.

Griffiths was born on December 18, 1968 in Australia, where she spent her early childhood on the Gold Coast. She is the daughter of Anna (née Hamilton), an art teacher and arts/education consultant, and Edward Martin Griffiths.[11] She has two older brothers, Ben, and Samuel.[12][13] She moved to Melbourne at the age of five, with her mother and two older brothers. When she was 11, her father left home with an 18-year-old woman. Griffiths was raised Roman Catholic,[14] and has an uncle who is a Jesuit priest.[13] She recalled first being inspired to become an actress after watching the U.S. miniseries Roots as a child.[15]

She attended Star of the Sea College, a high school in Gardenvale.[16] She earned a Bachelor of Education degree in drama and dance at Victoria College, Rusden.[17] After being rejected from the National Institute of Dramatic Art, Griffiths joined the Woolly Jumpers, a Geelong-based community theatre group.[1] In 1991, she wrote and performed the one-woman show Barbie Gets Hip, which played at the Melbourne Fringe Festival in 1991.[18]

Griffiths and Toni Collette were relative unknowns when they were cast as best friends and fellow outcasts in the 1994 film Muriel's Wedding. Her performance won her critical acclaim and both the Australian Film Critics Award and the Australian Film Institute Awards for Best Supporting Actress. She followed in 1996 with the role of an earthy, ill-mannered pig farmer's daughter in Michael Winterbottom's Jude.

In 1997, Griffiths sparked a controversy after attending uninvited the opening of the Crown Casino in Melbourne, Australia, while topless. She stated a wish to protest the views taken by the media and state government towards the new casino, inspired by the story of Lady Godiva.[19][20]

Griffiths joined forces again with Muriel's Wedding director P. J. Hogan for her American film debut, My Best Friend's Wedding, in 1997. That same year she starred in My Son the Fanatic, a British film in which she portrayed a tough Yorkshire prostitute who becomes involved with a considerably older Pakistani taxicab driver, played by Om Puri. Griffiths received an Academy Award nomination for Best Supporting Actress for her portrayal of real-life flautist Hilary du Pré opposite Emily Watson as her sister, famed cellist Jacqueline "Jackie" du Pre, in Hilary and Jackie (1998).[18] After the release of Hilary and Jackie, Griffiths was cast in the starring role in the Australian comedy Me Myself I (1999).[18]

In 2001, Griffiths appeared opposite Natasha Richardson in the English comedy Blow Dry,[21] playing a lesbian hairdresser who enters a hairstyling competition with her lover, followed by the Ted Demme-directed Blow (2001) opposite Johnny Depp and Ray Liotta, in which she played the mother of Boston cocaine magnate George Jung.[22] Nick Nunziata of IGN was critical of Griffiths' performance in the film, writing: "the only performance that doesn't ring true is that of Rachel Griffiths as Jung's mother...she just doesn't connect."[22]

The same year Griffiths appeared in Blow, she was cast as one of the leads in the HBO drama series Six Feet Under. Her performance as emotionally-scarred massage therapist, Brenda Chenowith, earned her Golden Globe[23] and Screen Actors Guild Awards,[24][25] as well as two Emmy Award nominations[26] over the series' five season-run. In the third season, she missed four episodes due to her first pregnancy; her second pregnancy was written into the show's final season and she appeared in almost every episode of the series.[27]

While starring on Six Feet Under, Griffiths continued to occasionally appear in the films, playing the supportive housewife of Dennis Quaid in the Walt Disney drama The Rookie (2002), and in the Australian biopic Ned Kelly (2003), opposite Heath Ledger, Geoffrey Rush, and Orlando Bloom.[28] In the spring of 2002,[29] she appeared in a Melbourne production of Proof by the American playwright David Auburn, for which she earned a Helpmann Award for Best Female Actor in a Play.[30]

In 2006, she became part of the ensemble cast, co-starring alongside Sally Field, Calista Flockhart, Balthazar Getty and Matthew Rhys, of the dramatic series Brothers & Sisters, in which she portrays Sarah Walker, who inherits control of the family business after her father's death. Griffiths received a 2007 Emmy nomination and a 2008 Emmy nomination for her work on the series,[31] followed by 2008 and 2009 Golden Globe nominations.[23] Griffiths starred on the series until its conclusion in 2011. Additionally, she appeared as Inez Scull in the 2008 miniseries adaptation of Larry McMurtry's Comanche Moon.

Griffiths made her Broadway debut in Other Desert Cities,[32] directed by Joe Mantello and co-starring Judith Light, Stockard Channing, and Stacy Keach, which began previews on 10 October 2011, opening on 3 November 2011 in Manhattan.[33][34] David Rooney of The Hollywood Reporter praised both Griffith's performance as well as the overall production, writing: " has acquired a riveting center in the raw performance of Rachel Griffiths, who makes a knockout New York stage debut. With discreet adjustments to the text and more penetrating characterizations all around from the sterling cast, the balance between comedy and intense family drama has been fine-tuned in richly satisfying ways".[35] Ben Brantley of The New York Times deemed her performance "a beautifully modulated Broadway debut".[36]

In 2012, Griffiths returned to live in her native Australia, after having lived and worked in the United States for a decade.[3] She expressed a desire to work less and spend more time with her children after having worked what she described as "80 hour-weeks" while appearing on Six Feet Under and Brothers & Sisters.[3]

In 2015, she made her debut as a television director when she directed three episodes of the second series of the Australian teen drama Nowhere Boys.[37][38]

In 2016, Griffiths was cast opposite Guy Pearce and Mary-Louise Parker in the American miniseries When We Rise, a docudrama focusing on LGBT rights, in which she portrays a nurse during the HIV/AIDS epidemic in the United States.[39] The same year, she appeared in a supporting part opposite Hugo Weaving in the Mel Gibson-directed war drama Hacksaw Ridge,[40] which earned her an AACTA nomination for Best Supporting Actress.[41] In 2018, she appears in the SBS thriller miniseries Dead Lucky, which was sold for American distribution to the streaming service SundanceNow in April 2018.[42]

In 2017, Griffiths worked promoting the "No Robe" campaign for the Art Series Hotels, which invited hotel guests to pose for nude portraits in their rooms and have them brought to life by artists.[43] She also serves on the board of the Sydney Contemporary art fair.[44]

Griffiths married Australian artist Andrew Taylor on 31 December 2002 in the chapel of her high school, Star of the Sea College, in Melbourne.[45] At their wedding, Griffiths requested that guests forgo gifts and instead donate funds to the Sacred Heart Mission, a Catholic-based charity in St Kilda.[1] In 2003, she and Taylor had a son, Banjo, followed by a daughter, Adelaide, in 2005. In 2009, she gave birth to her third child, daughter Clementine, in Los Angeles;[46] Griffiths suffered a ruptured uterus during Clementine's birth, which nearly ended her life.[47] She spent a total of three days undergoing surgery, and recovered from the condition.[48]

Griffiths is a practising Catholic.[49] In 2017, she spoke out in favor of same-sex marriage in Australia, saying: "I can’t speak for how Tony Abbott can have a gay sister and want to deny her what I would say is one of the crowning achievements and most successful parts of his life—a long and loving and fruitful marriage...We were one of the first countries to give women the vote, one of the first countries to have a female representative. I think we’ve been at the forefront of this progress and I think it's very unfortunate that our sense of inclusion has fallen behind our aspirations."[14] She has also supported the Global Charter of Basic Rights campaign for Oxfam Australia.[18] She considers herself a feminist, though she commented in 2017 that she spent much of her life being a "poor" activist, and was later inspired by young feminists, specifically "how they invert and own and co-opt and usurp the attempts to gag and reduce and delegitimise ... I find them really brave, and often their paths of resistance are very exciting."[15]

After having lived and worked in the United States for nearly a decade while appearing on the series Six Feet Under and Brothers & Sisters, Griffiths returned to live in her native Australia in 2012.[3]