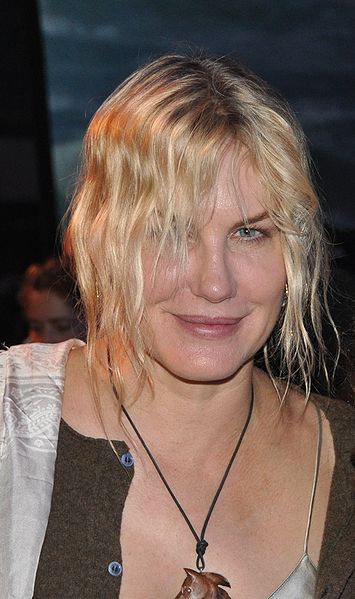 Daryl Christine Hannah (born December 3, 1960) is an American actress and environmental activist. She made her screen debut in Brian De Palma's supernatural horror film The Fury (1978). She is known for her roles as Pris Stratton in Ridley Scott's science fiction thriller Blade Runner (1982) and as Cathy Featherstone in Randal Kleiser's romantic comedy Summer Lovers (1982), as the mermaid Madison in Ron Howard's fantasy-romantic comedy Splash (1984), Roxanne Kowalski in the romantic comedy Roxanne (1987), Darien Taylor in Oliver Stone's drama Wall Street (1987) and Annelle Dupuy Desoto in the comedy-drama Steel Magnolias (1989). In 2015 she appeared in the Netflix series Sense8 as Angelica Turing. In 2004, Hannah won a Saturn Award for her role as assassin Elle Driver in Quentin Tarantino's two-part martial arts action film Kill Bill.

Hannah was born in Chicago, Illinois, to Susan Jeanne Metzger, a producer and former schoolteacher, and Donald Christian Hannah, a tugboat and barge company owner.[1][2][3] Her parents divorced and her mother subsequently married businessman Jerrold Wexler, brother of cinematographer Haskell Wexler. Hannah grew up with siblings Don and Page Hannah as well as her maternal sister Tanya Wexler, in Long Grove, Illinois.[4]

Hannah became interested in movies at a young age, partly due to insomnia. She has said that she was very shy growing up.[5] Hannah attended the progressive Francis W. Parker School (where she played on the soccer team) before enrolling at the University of Southern California. She studied ballet and acting. When she was a child, medical professionals recommended that she be institutionalized and medicated.[6]

Hannah made her film debut in 1978 with an appearance in Brian De Palma's horror film The Fury.[4] She turned down many roles early in her career. She also had an early role along with Rachel Ward in the 1983 horror film The Final Terror. During production, The Final Terror was shot in the Redwood Park in 1981 before the film was later released in 1983 to capitalize on Hannah's blossoming career.

In 1982, Hannah played the acrobatic and violent replicant Pris in Ridley Scott's science fiction classic Blade Runner, in which she performed some of her own gymnastic stunts. That same year she appeared in the summer hit release Summer Lovers. She then was cast as a mermaid in Ron Howard's 1984 fantasy Splash, which starred Tom Hanks. Also in 1984, she appeared in The Pope of Greenwich Village, with co-stars Mickey Rourke and Eric Roberts. In 1985, Daryl appeared in and provided backing vocals in the music video "You're a Friend of Mine", performed by Clarence Clemons and Jackson Browne. Hannah's roles in the remainder of the 1980s ranged from 1986's film version of the best seller The Clan of the Cave Bear and Legal Eagles. The next year, she appeared in the Academy Award-winning Wall Street, for which she received a Razzie Award.[7] She starred in the title role of Fred Schepisi's 1987 film Roxanne, a modern retelling of Edmond Rostand's play Cyrano de Bergerac. Her performance was described as "sweet" and "gentle" by film critic Roger Ebert.[8] She starred in High Spirits (1988) alongside Peter O'Toole and ended the decade with Crimes and Misdemeanors (alongside Woody Allen) and Steel Magnolias (both 1989).

Hannah played the daughter of Jack Lemmon's character in both of the Grumpy Old Men comedies. That same year, she played Nancy Archer in the HBO comedy remake of Attack Of The Fifty-Foot Woman. In 1995, Hannah was chosen by Empire magazine as No. 96 of the "100 Sexiest Stars in Film History."[9] That year she appeared as homicidal sociopath Leann Netherwood in The Tie That Binds. She also starred in the 1998 direct-to-video film Addams Family Reunion playing Morticia Addams.

Daryl Hannah at the Farm Gala 2006

Of her recent roles, the most memorable may be that of the one-eyed assassin, Elle Driver, in Kill Bill, directed by Quentin Tarantino. Her performance in this film and her appearances in A Walk to Remember, Speedway Junky, Northfork, Michael Radford's Dancing at the Blue Iguana, John Sayles' Casa de los Babys and Silver City, have been described by some as a comeback.[10] After Kill Bill, she appeared in several TV films and miniseries, including the Syfy original film Shark Swarm, Final Days of Planet Earth for the Hallmark Channel, and Kung Fu Killer for Spike. She was in Shannon's Rainbow and The Cycle in 2009.

In the 2010s, Hannah released several films, including A Closed Book, A Fonder Heart, and Eldorado. Robert Koehler of Variety wrote of A Closed Book that it allows curious fans to see what Hannah has been up to lately.[11] In 2013, she starred in Zombie Night, a Syfy original film by The Asylum as well as in Mother, a thriller by The Asylum about internet bullying. In 2013, she joined Skin Traffik,[12] and, in 2014, she signed on to Signs of Death.[13]

Since 2015, she has appeared in Sense8, a series on Netflix from the Wachowskis. The series ran for two seasons, with a finale episode released on June 8, 2018.

Hannah also is an accomplished theatre actress, reprising Marilyn Monroe's starring role in The Seven Year Itch in 2000 at London's West End. Reviews of the play commended Hannah's performance, with Lizzie Loveridge of Curtain Up! saying that the play was the "perfect vehicle" for Hannah to "show her talents as a comedienne."[14] She was also in films Cord and First Target in the same year.[15]

Hannah wrote, directed and produced a short film titled The Last Supper. She directed, produced, and was cinematographer for the documentary Strip Notes, which was broadcast on Channel 4 in the UK and on HBO. It was about the research Hannah did for her role as a stripper in Dancing at the Blue Iguana.

Hannah and actress Hilary Shepard Turner created two board games, Love It or Hate It and LIEbrary,[17] with Hannah previewing the latter on The Ellen DeGeneres Show in 2005.[18]

Hannah, an active environmentalist, has her own weekly video blog called DHLoveLife[19] on sustainable solutions.[20] She is often the sound recordist, camera person and on-screen host for the blog.[21] Her home runs on solar power and is built with green materials. She drives a car that runs on biodiesel.[22] She has been vegetarian since age 11,[23] and later became vegan.[24] In late 2006, she volunteered to act as a judge for Treehugger.com's[25] "Convenient Truths" contest.[26] On December 4, 2008, Hannah joined Sea Shepherd Conservation Society's crew aboard the MV Steve Irwin, as part of Operation Musashi.[27]

On June 13, 2006, Hannah was arrested, along with actor Taran Noah Smith, for her involvement with over 350 farmers, their families and supporters, confronting authorities trying to bulldoze the largest urban farm in the U.S., located in South Central Los Angeles. She chained herself to a walnut tree at the South Central Farm for three weeks to protest against the farmers' eviction by the property's new owner, Ralph Horowitz. The farm had been established in the wake of the 1992 L.A. riots to allow people in the city to grow food for themselves. However, Horowitz, who had paid $5 million for it, sought to evict the farmers to build a warehouse. He had asked for $16 million to sell it but turned down the offer when the activists raised that amount after the established deadline. Hannah was interviewed via cell phone shortly before she was arrested, along with 44 other protesters, and said that she and the others are doing the "morally right thing".[28] She spent some time in jail.[29]

Hannah has also worked to help end sexual slavery and has been traveling around the world to make a documentary.[30]

Hannah was among 31 people arrested on June 23, 2009, in a protest against mountaintop removal in southern West Virginia, part of a wider campaign to stop the practice in the region. The protesters, who also included NASA climate scientist James E. Hansen, were charged with obstructing officers and impeding traffic after they sat in the middle of State Route 3 outside Massey Energy's Goals Coal preparation plant, The Charleston Gazette reported.[31] In a Democracy Now! phone interview on June 24, 2009, Hannah spoke briefly on why she went to West Virginia and risked arrest.[32]

Hannah was arrested on August 30, 2011, in front of the White House as part of a sit-in to protest against the proposed Keystone oil pipeline from Canada to the U.S. Gulf Coast.[33] In a Huffington Post piece co-authored with Phil Radford, Hannah explained that the purpose of her action was to "shine the light" on the President's decision on the pipeline for "millions of voters" to see.[34] In October 2011, Hannah and other pipeline opponents rode horses and bicycles and walked from the Pine Ridge Indian Reservation to the Rosebud Reservation to protest the project.[35]

Hannah was the executive producer of Greedy Lying Bastards, a 2012 documentary against climate change denial.[36]

In September 2012, Hannah signed environmental activist Tom Weis' open letter calling on President Barack Obama and Governor Mitt Romney to withdraw their support for the construction of the southern leg of the Keystone XL pipeline, that would transport oil sands from Montana to Texas. Other signatories included climate scientist James Hansen and actors Sheryl Lee, Mariel Hemingway, and Ed Begley Jr..[37] On October 4, 2012, Hannah was arrested and jailed in Wood County, Texas, for criminal trespassing. She and a local landowner, 78-year-old Eleanor Fairchild, were arrested while protesting against the TransCanada Keystone XL oil sands pipeline by attempting to block heavy construction equipment. Although they were charged with trespassing, they were in fact protesting on Fairchild's land.[38] On February 13, 2013, Hannah was arrested at the White House along with Robert F. Kennedy Jr. and Conor Kennedy during a climate change protest against the proposed Keystone Pipeline.[39]

On April 26, 2014 in Washington, Hannah and Neil Young led a march by the "Cowboy and Indian Alliance" group against the Obama administration to reject the proposed Keystone Pipeline.[40][41][42]

Hannah with Jackson Browne at the Academy Awards, 1988

Hannah had long-term relationships with John F. Kennedy Jr.[46] and musician Jackson Browne.[47] Since 2014 she has been in a relationship with musician Neil Young.[48] Hannah and Young are reported to have married in August 2018.[49] Young confirmed his marriage to Hannah in October 2018.[50]

In September 2013, Forbes magazine reported that Hannah had been diagnosed in childhood as having autism. When she was a child, medical professionals recommended that she be institutionalized and medicated.[51][52]

Report a problem
Write to Daryl Hannah at FanPal • 2022