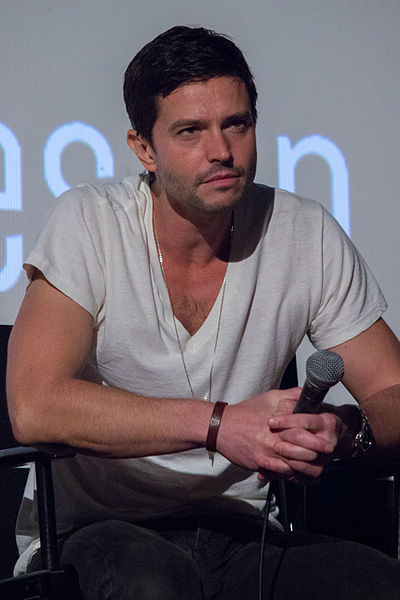 The second of four boys, Behr was born in Minneapolis, Minnesota on December 30, 1973, to Patricia Ann Steiner and David Behr. After his parents' divorce, Patricia moved her sons back to Richfield, where Jason attended St. Richards Catholic Elementary, a private grade school.

Behr first started acting at the age of five when he participated in a school play as a sunflower. By age eight he was doing commercials for Stomper Trucks and modeling for local department stores. Behr continued to perform throughout his school years. In 1992 he graduated from Richfield Senior High School, in Richfield, Minnesota. At the age of 19, after a chance meeting with Hollywood manager Marvin Dauer in Minneapolis, Behr moved to Los Angeles. In his early acting career, he appeared in over 75 commercials, and in 1995 landed the role of Tyler Baker in the racy Showtime comedy series Sherman Oaks. It ran for two seasons until it was cancelled in early 1997.

After Sherman Oaks, Behr had a series of guest appearances in various television shows (Step by Step, The Profiler, 7th Heaven, Buffy the Vampire Slayer, JAG). He was cast in the ABC series Push, but the ill-fated show only aired a few times before being cancelled. Then Behr picked up a recurring role as the character Chris Wolfe in The WB's series Dawson's Creek. While filming the show in North Carolina, Jason read the script for a pilot called Roswell High — later shortened to Roswell — and felt an immediate affinity for the lead alien, Max Evans. Roswell had a moderately successful run on The WB for two seasons, then moved to UPN for its third and final season. While the show never hit it big in the ratings, the series had an extremely loyal fan base.

Since Roswell, Behr has taken on a variety of roles in independent films such as: Unsu Lee's Happily, Even After;[1] Jefery Levy's Man of God, and Rebecca Cook's Shooting Livien. In 2001 he played Dennis Buggit in Lasse Hallstrom's The Shipping News, co-starring with Kevin Spacey, Judi Dench, Julianne Moore, and Cate Blanchett. He made a guest appearance in Buffy the Vampire Slayer in 1998, and was later reunited with leading actress Sarah Michelle Gellar in the hit Japanese/American film collaboration The Grudge. His two most recent film appearances were in the Korean CGI dragon fantasy D-War and Lions Gate's reinvention of the werewolf tale, Skinwalkers.

In the spring of 2006, Behr wrapped the CBS dramatic pilot, The Way, about a powerful New England family that uses witchcraft to further its business enterprises. Jason plays Michael Warden, the show's male lead, one of the family's children who is at the center of a sibling power rivalry. Jason is in good company with fellow castmates who include, Jane Alexander, Julia Ormond, Peter Strauss, Will Patton, and Andrew McCarthy. As of May 17, 2006, CBS announced its fall lineup — and The Way was not picked up. In May 2006, Behr wrapped Senseless, filmed in and around Glasgow, Scotland, for Matador Pictures, Circle of Confusion, Shoreline Entertainment, and in association with Plum Films; a dark chiller written by Simon Hynd, based on the book of the same name by Stona Fitch. Once again, Jason takes the lead, playing Eliott Gast, an American economist who is abducted in Europe by a shadowy anti-globalization group.

Senseless unfolds as an affluent business man (Jason Behr) finds himself the unwilling hostage to political extremists who brutally torture him for acts he has no recollection of ever committing.[2]

Audiences of blood-thirsty home viewers fixate on their computer screens as his torment is streamed across the internet and delivers the most graphic and disturbing reality show ever to be broadcast.

Behr starred in the thriller The Tattooist, which cast him as a tattoo artist who becomes fascinated by the Samoan tatau tradition, but his desire to learn the ancient skill brings him into conflict and danger with the island mysticism and a deadly spirit is released as a result. The film was commercial director Peter Burger's feature film debut.[3] Filming started in Auckland, New Zealand, in September 2006, and finished in early November 2006. It was released in New Zealand on 30 August 2007.[4]

In April 2007, Behr began shooting his new film project Frost (since renamed The Last International Playboy). The film made its debut at the Gen Art film festival in New York City in April 2008, with its nationwide theatrical release on June 12, 2009.[5]

Jason previously dated his Roswell co-star Katherine Heigl.[6] While shooting The Grudge in Japan, he met actress KaDee Strickland, whom he married on November 10, 2006, in Ojai, California.[7] They welcomed their first child, a son, in October 2013.[8]