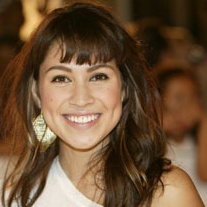 Cassandra Rae "Cassie" Steele (born December 2, 1989)[1] is a Canadian actress, singer and songwriter, best known for portraying Manny Santos on Degrassi: The Next Generation and Abby Vargas on The L.A. Complex. Steele is of British descent on her father's side and Filipino descent on her mother's side.[2] In 2014, she played Sarah in the MTV horror television movie The Dorm.

Steele began crafting her own songs to go with her poetry when she was in the first grade, she then began taking singing lessons. She attended London School of Dance in Scarborough, Ontario, and trained in ballet and jazz dance. Cassie was also a gymnast for an unspecified amount of time.

Cassie first appeared in a commercial for Fib Finder in 2001.

In 2001, Steele appeared on an episode of Relic Hunter as the ten-year-old version of Sydney Fox.

Since she was eleven years old, Steele has appeared as a regular cast member on Degrassi: The Next Generation playing the character of Manny Santos. She played the role for nine years, before exiting the show in 2010. She has also appeared in three Degrassi TV films: Degrassi Spring Break Movie, Degrassi Goes Hollywood and Degrassi Takes Manhattan.

During the filming of Degrassi, Steele also starred in the Disney film Full Court Miracle as well as the MTV movie Super Sweet 16: The Movie and My Babysitter's a Vampire and had recurring roles in The Best Years and Instant Star.

Steele has also embarked on a music career. Her debut album, How Much for Happy, was released in 2005, followed by two Canadian tours. Steele's follow-up album, Destructo Doll, was released on July 21, 2009. She appeared on Channel One News to promote the album for the music segment.

2011-present: The L.A. Complex and other projects

In 2011, Steele was cast as Abby Vargas in the series The L.A. Complex, which premiered on CTV and Much Music on January 10, 2012, and aired regularly on Much Music. On the same day as the premiere, the series was officially picked up by The CW to begin airing in the United States in the spring. It was renewed for a second season, which aired simultaneously on both Much Music and The CW that summer. The L.A. Complex was officially cancelled on December 20, 2012.

On April 17, 2012, Steele released the extended-play "Shifty" to iTunes. On April 1, 2014, her single "Mad" was released to iTunes. The official lyric video premiered on her VEVO page one day prior.

She starred as Valerie Vont in the Lifetime film Sorority Surrogate, which was released on March 22, 2014. She will appear as Sarah in the film The Dorm later in the year.