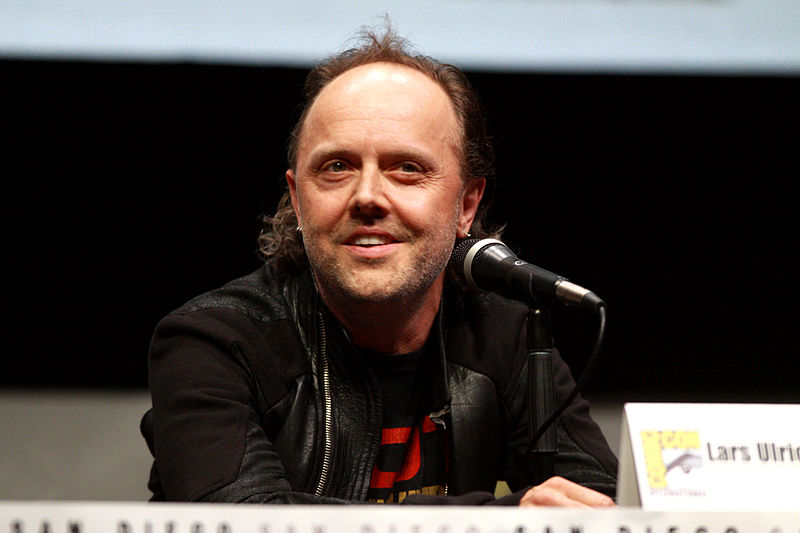 Lars Ulrich R[2] (/ˈʊlrɪk/; ; born December 26, 1963) is a Danish[3] drummer. He is also a musician, songwriter, actor, and record producer. He is best known as the drummer and co-founder of the American heavy metal band Metallica. The son of tennis player Torben Ulrich and grandson of tennis player Einer Ulrich, he also played tennis in his youth and moved to Los Angeles at age 16 to train professionally. However, rather than playing tennis, Ulrich began playing the drums. After publishing an advertisement in The Recycler, Ulrich met vocalist/guitarist James Hetfield and formed Metallica.

Ulrich was born into an upper-middle-class family[4] in Gentofte, Denmark;[4][5] the son of Lone (née Sylvester-Hvid) and professional tennis player Torben Ulrich.[6] His paternal grandfather was professional tennis player Einer Ulrich. His paternal grandmother, Ulla Meyer, was from a Jewish family; as a result, Ulrich's grandfather was persecuted by the Nazis during World War II.[7] Saxophonist Dexter Gordon was Ulrich's godfather, and he is a childhood friend of musician Neneh Cherry.[8]

In February 1973, Ulrich's father obtained passes for five of his friends to a Deep Purple concert held in the same Copenhagen stadium as one of his tennis tournaments. When one of the friends could not go, they gave their ticket to the nine-year-old Ulrich, who was mesmerized by the performance and bought the band's album Fireball the next day. The concert and album had a considerable impact on Ulrich, inspiring the start of his music career.

As a result of his newfound interest in music, he received his first drum kit, a Ludwig, from his grandmother around the age of 12 or 13.[9] Ulrich originally intended to follow in his father's footsteps and play tennis, and he moved to the Newport Beach, California, U.S. in the summer of 1980.[10] Despite being ranked in the top ten tennis players of his age group in Denmark, Ulrich failed to make it into the 7 man Corona del Mar High School tennis team, contributing to his decision to focus on music.[11]

In the documentary Anvil! The story of Anvil, Ulrich states that witnessing a Y&T show was his defining moment in deciding to become a musician. In 1981, he discovered British heavy metal band Diamond Head. He was excited about the band's style of music after purchasing their debut album Lightning to the Nations, and traveled from San Francisco to London to see the band perform live at the Woolwich Odeon. Ulrich remains a fan of Diamond Head and would later go on to mix their album The Best of Diamond Head.[12] Upon returning to America, Ulrich placed an advert in a local classifieds newspaper looking for musicians to start a band with him. James Hetfield replied to the ad, and Metallica was formed.[13]

Later in 1981, Ulrich met James Hetfield in Downey, California, and they formed the heavy metal band Metallica. He got the band name from a friend, Ron Quintana, who was brainstorming names for a heavy metal fanzine he was creating, and Metallica was one of the options, the other being "Metal Mania." Ulrich encouraged him to choose Metal Mania, and used the name Metallica for himself.[14]

He became known as a pioneer of fast thrash drum beats, featured on many of Metallica's early songs, such as "Metal Militia" from Kill 'Em All, "Fight Fire with Fire" from Ride the Lightning, "Battery" and "Damage Inc." from Master of Puppets and "Dyers Eve" from ...And Justice for All. He has since been considerably influential due to both the popularity of his band, as well as his drum techniques, such as the double bass drum in the song "One" (...And Justice for All) and "Dyer's Eve". Since the release of Metallica, Ulrich adopted a less focused and simplified style of drumming, and reduced his kit from a 9-piece to a 7-piece.

Between 1998 and 2002, Ulrich tried running a record label, the Music Company. The company was a joint venture with Metallica accountant Tim Duffy. It failed to catch on and folded in the spring 2002.[15] His voice can be heard in the opening seconds of "Leper Messiah" and he also counts to four in his native Danish on the "St. Anger" music video.[citation needed]

He made his acting debut in the HBO original film Hemingway & Gellhorn, which began filming in March 2011 and was released on 28 May 2012.[16] Ulrich made a brief cameo appearance as himself in the film Get Him to the Greek, as the partner of the character Jackie Q.[17]

In 2012, Ulrich was the focus of the documentary film, "Mission to Lars". The film by Kate and Will Spicer concerns their journey with their brother Tom, who lives in a care home in Devon, England and who has Fragile X syndrome, to try to meet Ulrich at one of Metallica's 2009 gigs in California.[18]

To unwind after certain gigs, Ulrich listens to jazz.[19]

Ulrich's drumming style has changed throughout his career. During the 1980s he was known for his fast, aggressive thrash beats. He would often utilize the double bass technique in Latin breakbeats, which became highly popular among heavy metal drummers. The best examples of this are found in songs such as "Metal Militia" (Kill 'Em All), "Fight Fire with Fire" (Ride the Lightning), "Battery", "Damage, Inc." (Master of Puppets), "Blackened", "One", "Dyers Eve" (...And Justice for All), "That Was Just Your Life", "All Nightmare Long" and "My Apocalypse" (Death Magnetic). Even though "Hardwired", "Moth Into Flame" and "Spit Out the Bone" have the same double bass technique, the 2016 release of Metallica's Hardwired... to Self-Destruct saw a more aggressive and experimental drumming style from Ulrich. Ulrich uses groove in his drum style, including clean and fast double bass beats in many songs and heavy drum fills. He has been known to drum in sync with the rhythm guitar played by James Hetfield.[20]

In April 2000, Ulrich became a vocal opponent of Napster and file sharing as Metallica filed a lawsuit against the company for copyright infringement and racketeering. In July 2000, he testified before the Senate Judiciary Committee after Metallica's entire catalogue, including the then-unfinished track "I Disappear" was found to be freely available for download on the service. The case was settled out-of-court, resulting in more than 300,000 Napster users being banned from the service.[21] Ulrich was quoted by LAUNCHcast as having some regrets:[22]

"I wish that I was more...you know, I felt kind of ambushed by the whole thing because I didn't really know enough about what we were getting ourselves into when we jumped. We didn't know enough about the kind of grassroots thing, and what had been going on the last couple of months in the country as this whole new phenomenon was going on. We were just so stuck in our controlling ways of wanting to control everything that had to do with Metallica. So we were caught off guard and we had a little bit of a rougher landing on that one than on other times than when we just blindly leaped. But you know, I'm still proud of the fact that we did leap...and I took a lot of hits and it was difficult."

Ulrich has been an activist in support of expanding access to health care for U.S. citizens, with his family working with the Haight Ashbury Free Clinic of San Francisco, California. He particularly raised $32,000 for the group during a celebrity edition of the popular Who Wants To Be A Millionaire? program.[23]

Ulrich has been married three times. His first marriage was in 1988 to Debbie Jones, a British woman he met on tour, but they divorced in 1990 due to Ulrich's constant absence during the recording of the 1991 album Metallica. His second marriage was to Skylar Satenstein, an emergency medicine physician, from 1997 to 2004. They had two sons before divorcing.[24]

Following his divorce from Satenstein, Ulrich dated Danish actress Connie Nielsen from 2004 to 2012. They had one child together.[25] He is currently married to American fashion model Jessica Miller.[26]

Ulrich is a fan of a wide variety of genres, feeling particularly passionate about jazz music. He is particularly inspired by the influential tenor saxophonist Dexter Gordon, who was Ulrich's godparent.[27]

Ulrich, a friend of Noel Gallagher, is a fan of Gallagher's former band Oasis and claimed Gallagher was his inspiration to give up cocaine in 2008.[28] Ulrich has also expressed his desire to sometime play drums in Gallagher's current band Noel Gallagher's High Flying Birds.[29]

At the 2016 Men in Blazers Night of the Golden Blazer, Ulrich revealed his passion for Chelsea Football Club, as he stated that he went to Stamford Bridge many a time starting in 1973 during the time his father was playing at Wimbledon during the Tennis Season.[30]

Ulrich also has a passion for fine art. In 2002 Ulrich parted with a painting from his own personal collection. It is now known as one of the world's most coveted contemporary art paintings, "Self Portrait" by Jean Michel Basquiat, 1982. With a pre-sale price estimate of $5 million, Ulrich took home almost triple that amount after the evening sale at Christie's Auction House.[31]

When Ulrich and fellow Metallica members James Hetfield, Jason Newsted, Cliff Burton, Kirk Hammett and Robert Trujillo were inducted into the Rock and Roll Hall of Fame in 2009, Ulrich was the first Dane to receive the honor.[32]

Having led the charge for several years to get his longtime favorite band, Deep Purple, inducted into the Rock and Roll Hall of Fame, Ulrich delivered the band's induction speech when Deep Purple finally went into the Hall in 2016.[33]

Ulrich was knighted in his native country of Denmark. He was awarded the Knight's Cross of the Order of the Dannebrog on May 26, 2017, by her majesty Margrethe II.[2]

In 2013, Ulrich used his silver drum kit that he used from the period 1995-2000 on a secret show on the Orion Music + More Festival when Metallica played as the band 'Dehaan'