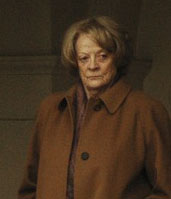 Dame Margaret Natalie Smith CH DBE (born 28 December 1934) is an English actress. She has had an extensive, varied career on stage, film, and television, spanning over 66 years. Smith has appeared in over 50 films, and is one of Britain's most recognizable actresses. A prominent figure in British culture for six decades, she was made a Dame by Queen Elizabeth II in 1990 for services to the performing arts,[1] and received the Companion of Honour from the Queen in 2014 for services to drama.[2]

Smith began her career on stage as a student performing at the Oxford Playhouse in 1952, and made her professional debut on Broadway in New Faces of '56. For her work on the London stage, she has won a record five Best Actress Evening Standard Awards: for The Private Ear and The Public Eye (both 1962), Hedda Gabler (1970), Virginia (1981), The Way of the World (1984), and Three Tall Women (1994). She received Tony Award nominations for Private Lives (1975) and Night and Day (1979), before winning the 1990 Tony Award for Best Actress in a Play for Lettice and Lovage. Other stage roles include Stratford Shakespeare Festival productions of Antony and Cleopatra (1976) and Macbeth (1978), and West End productions of A Delicate Balance (1997) and The Breath of Life (2002).

On screen, Smith first drew praise for the crime film Nowhere to Go (1958), for which she received her first BAFTA Award nomination.[3] She has won two Academy Awards, winning Best Actress for The Prime of Miss Jean Brodie (1969) and Best Supporting Actress for California Suite (1978). She is one of only six actresses to have won in both categories.[4] She has won a record four BAFTA Awards for Best Actress, including for A Private Function (1984) and The Lonely Passion of Judith Hearne (1988), a BAFTA for Best Supporting Actress for Tea With Mussolini (1999), and three Golden Globe Awards. A six-time Oscar nominee, her other nominations were for Othello (1965), Travels with My Aunt (1972), A Room with a View (1986), and Gosford Park (2001).

Margaret Natalie Smith was born in Ilford, Essex,[9][10][11][12][13] on 28 December 1934.[14] Her father, Nathaniel Smith (1902-1991), was a public health pathologist from Newcastle upon Tyne who worked at Oxford University; her mother, Margaret Hutton (née Little; 1896-1977), was a Scottish secretary from Glasgow.[9][15][16][17] During her childhood, Smith's parents told her the romantic story of how they had met on the train from Glasgow to London via Newcastle. She moved with her family to Oxford when she was four years old. She had older twin brothers, Alistair (died 1981) and Ian. The latter went to architecture school. Smith attended Oxford High School until age 16, when she left to study acting at the Oxford Playhouse.[18]
Read more...

In 1952, aged 17, under the auspices of the Oxford University Dramatic Society, Smith began her career as Viola in Twelfth Night at the Oxford Playhouse. In 1954, she appeared in the television programme Oxford Accents produced by Ned Sherrin.[19] She appeared in her first film in 1956, in an uncredited role in Child in the House,[20] and made her Broadway debut the same year playing several roles in the review New Faces of '56, at the Ethel Barrymore Theatre from June to December 1956.[21][22] In 1957, she starred opposite Kenneth Williams in the musical comedy Share My Lettuce, written by Bamber Gascoigne.[23] In 1958, she received the first of her 18 BAFTA Film and TV nominations for her role in the film Nowhere to Go.

In 1962, Smith won the first of a record five Best Actress Evening Standard Awards for her roles in Peter Shaffer's plays The Private Ear and The Public Eye, again opposite Kenneth Williams. She became a fixture at the Royal National Theatre in the 1960s, most notably for playing Desdemona in Othello opposite Laurence Olivier and earning her first Oscar nomination for her performance in the 1965 film version. She appeared opposite Olivier in Ibsen's The Master Builder, and played comedic roles in The Recruiting Officer and Much Ado About Nothing. Her other films at this time included Go to Blazes (1962), The V.I.P.s (1963), The Pumpkin Eater (1964), Young Cassidy (1965), Hot Millions (1968), and Oh! What A Lovely War (1969).

Smith won the Academy Award for Best Actress for her performance in the title role of the 1969 film The Prime of Miss Jean Brodie. Vanessa Redgrave had originated the role on stage in London,[24] and Zoe Caldwell won the Tony Award for Best Actress in a Play, when she played the role in New York. The role also won Smith her first BAFTA Award. In 1970, she played the title role in Ingmar Bergman's London production of the Ibsen play Hedda Gabler, winning her second Evening Standard award for Best Actress. She received her third Academy Award nomination for the 1972 film Travels with My Aunt. She also appeared in the film Love and Pain and the Whole Damn Thing (1973). In the mid-1970s, she made several guest appearances on The Carol Burnett Show.

From 1976 to 1980, she appeared in numerous productions at the Stratford Shakespeare Festival in Stratford, Ontario, to acclaim; her roles included Queen Elizabeth in Richard III, Cleopatra, Lady Macbeth, Virginia Woolf in Virginia, and opposite Brian Bedford in the Noël Coward comedy Private Lives. Also during this time, she starred on Broadway in Private Lives in 1975 and Night and Day in 1979, receiving Tony Award nominations for both. Smith received the 1978 Academy Award for Best Supporting Actress for her role as Diana Barrie in California Suite. For this role, she also won her first Golden Globe Award. Afterward, upon hearing that Michael Palin was about to embark on the film The Missionary (1982) with Smith, her co-star Michael Caine is supposed to have humorously telephoned Palin, warning him that she would steal the film. Her other films at this time include Murder by Death (1976) and Death on the Nile (1978).

In 1981, Smith played the goddess Thetis in Clash of the Titans. For her role on television as Mrs Silly, she received the first of her four Best Actress BAFTA TV Award nominations. On stage, she won her third and fourth Evening Standard awards for Best actress, for Virginia in 1981 and The Way of the World in 1984. She won three more Best Actress BAFTA Awards for her roles as Joyce Chilvers in the 1984 black comedy A Private Function, Charlotte Bartlett in the 1986 Merchant Ivory production of A Room with a View, and the title role in the 1987 film The Lonely Passion of Judith Hearne. For A Room With a View, she also received her fifth Academy Award nomination, and won her second Golden Globe Award. In 1987, she starred in A Bed Among the Lentils, part of Alan Bennett's Talking Heads series, receiving a second BAFTA TV nomination. She starred in the 1987 London production of Lettice and Lovage alongside Margaret Tyzack, receiving an Olivier Award nomination, and reprised the role in 1990, when it transferred to Broadway, and won the Tony Award for Best Actress in a Play. The play was written specifically for her by the playwright Peter Shaffer.

In the 1990s, Smith appeared as Wendy Darling in the 1991 hit movie Hook, and also appeared in the hit comedy films Sister Act in 1992 and The First Wives Club in 1996. She also received a third BAFTA TV nomination for the 1992 TV film Memento Mori, and her first Emmy nomination for her role in the 1993 TV film Suddenly, Last Summer. She won a BAFTA for Best Supporting Actress for the 1999 film Tea with Mussolini, in which she played Lady Hester. She also appeared in the films The Secret Garden (1993), Richard III (1995), and Washington Square (1997). Her 1990s stage roles included Three Tall Women in 1994, which won her a fifth Evening Standard award, Claire in A Delicate Balance opposite Eileen Atkins in 1997, and The Lady in the Van in 1999.

Due to the international success of the Harry Potter movies, she is now widely known for playing Professor Minerva McGonagall, opposite Daniel Radcliffe in the title role. She has appeared in seven of the eight films in the series from 2001 to 2011. She and Radcliffe had worked together previously in the 1999 BBC television adaptation of David Copperfield, in which she played Betsey Trotwood and received a BAFTA TV Award nomination. She received her sixth Academy Award nomination for the 2001 film Gosford Park, directed by Robert Altman, and won her first Emmy Award for the 2003 TV film My House in Umbria. On stage, she starred as Madeleine Palmer, opposite Judi Dench, in the David Hare play The Breath of Life in 2002, toured Australia in Alan Bennett's Talking Heads in 2004, and starred in The Lady from Dubuque in 2007.

Beginning in 2010, Smith appeared as Violet Crawley, Dowager Countess of Grantham, in the British period drama Downton Abbey. This role won her a Golden Globe Award and two Emmy Awards.[25][26][27] In 2014, the role also won her a Screen Actors Guild Award.[28] In 2012, she played Muriel in the British comedy The Best Exotic Marigold Hotel, and starred as Jean Horton in Quartet, based on Ronald Harwood's play, directed by actor Dustin Hoffman.

In a March 2015 interview with Joe Utichi in The Sunday Times, Smith announced that the sixth season of Downton Abbey would be her last (it was in fact the last to be produced).[29] On 30 October 2015, Smith appeared on BBC's The Graham Norton Show, her first appearance on a chat show in 42 years. During the show, Smith discussed her appearance in the comedy-drama film The Lady in the Van, which was directed by Nicholas Hytner.[30][31]

In January 1988, Smith was diagnosed with Graves' disease, for which she underwent radiotherapy and optical surgery.[37]

In 2007, the Sunday Telegraph disclosed that Smith had been diagnosed with breast cancer. She was subsequently reported to have made a full recovery.[38]

In September 2011, Smith offered her support for raising the $4.6 million needed to help rebuild the Court Theatre in Christchurch, New Zealand, after the earthquake in 2011 which caused severe damage to the area.[39] In July 2012, she became a patron of the International Glaucoma Association, hoping to support the organization and raise the profile of glaucoma.[40] On 27 November 2012, she contributed a drawing of her own hand to the 2012 Celebrity Paw Auction, to raise funds for Cats Protection.[41]

She was awarded the Shakespeare Prize by the Hamburg Alfred Toepfer Foundation in 1991.[50] Smith was made a Fellow of the British Film Institute in recognition of her outstanding contribution to film culture in 1992.[51] She was elected to the American Theatre Hall of Fame in 1994. On 10 April 1999 Smith received the William Shakespeare Award for Classical Theatre (The Will Award) presented by the Shakespeare Theatre Company in Washington, D.C. in recognition of her significant contribution to classical theatre in the US.[52] On 9 February 2014 she was inducted into the Actors Hall of Fame.[53] Smith had a star on the London Avenue of Stars until all of the stars were removed in 2006.[54]

On 10 September 2012, she was honoured with the Stratford Shakespeare Festival's Legacy Award. She accepted the award, presented to her by Christopher Plummer, in a ceremony at the Fairmont Royal York Hotel.[7] In March 2016, Smith was awarded the Critics' Circle Award for Distinguished Service to the Arts.[57] In April 2016, she was awarded the Bodley Medal by the University of Oxford's Bodleian Libraries in recognition of her outstanding contribution to the performing arts.[8]

Report a problem
Write to Maggie Smith at FanPal • 2022