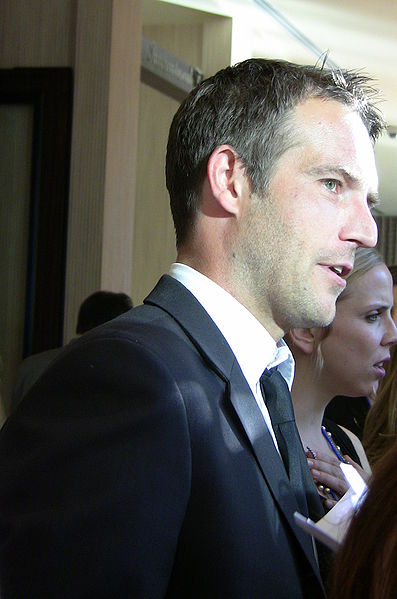 Michael S. Vartan (born November 27, 1968) is a French-American[1] actor, best known for his role as Michael Vaughn on the ABC television action drama Alias, his role on the TNT medical drama Hawthorne, and his role on the E! drama The Arrangement as Terence Anderson. His film roles include The Pallbearer, Never Been Kissed, The Next Best Thing, One Hour Photo, Monster-in-Law, Rogue, and Colombiana.

Michael Vartan was born in Boulogne-Billancourt, Hauts-de-Seine, France. He is the son of Edmond "Eddie" Vartan (1937-2001), a musician, and Doris (née Pucher), a painter and artist.[2][3] His paternal aunt is singer Sylvie Vartan and his stepfather is writer Ian La Frenais.[4] Michael's paternal grandfather was of Armenian and Bulgarian descent, while Michael's paternal grandmother was of Hungarian-Jewish background.[5][6][7] Michael's mother is a Polish-Jewish immigrant to the United States.[8][9][10]

Vartan has said about his French background that "The funny thing is I'm actually a Polish Jew who happens to be born in France. My mom is Polish and my dad is Bulgarian. I don't have an ounce of French blood. But I work it".[8][11] He has stated that he tends to be considered a Frenchman in the United States and an American in France.[12]

His parents divorced when he was five and he moved to the United States with his mother.[13] He moved back to France to be with his father until his high school years, and grew up a "farm kid" in a "simple environment"[10] in Fleury, Manche, a small town in Normandy.[13][14] At the age of eighteen, Vartan moved back in with his mother in Los Angeles, telling her that he wanted to be an artist,[15] because he did not wish to fulfill the mandatory military service required in France.[10] In Los Angeles, he attended an acting school after he was told he possessed acting talent. He had also attended the prestigious Lycée Français de Los Angeles. Vartan now considers himself to be American and stated on the talk show Rove that he would like Australia to be his second home.[16] He is bilingual, being fluent in French and English.[17]

After starring roles in European films, including an acclaimed performance in the Taviani Brothers' Fiorile, and several smaller film roles, Vartan had noticeable supporting roles in major Hollywood movies, including Never Been Kissed (1999), One Hour Photo (2002) and Monster-in-Law (2005).[16] In 2007, he appeared in the Australian horror film Rogue, and starred in the film Jolene in 2008.

Vartan's most notable role to date has been as Michael Vaughn in the American television series Alias (2001-2006). He played the role of Lancelot in TNT's production of Marion Zimmer Bradley's The Mists of Avalon (2001). Vartan has also had guest appearances on Friends (as Dr. Tim Burke, Tom Selleck's character's son) and Ally McBeal (as Jonathan Basset). He also appeared on the show Kitchen Confidential, which starred his former Alias co-star Bradley Cooper, as a French chef who was Cooper's rival. In September 2007, Vartan played James Walker, a main role in the ABC drama Big Shots. However, the show was canceled after one season.

Vartan is co-starred opposite Jada Pinkett Smith in TNT's series Hawthorne. Vartan replaced Jeffrey Nordling, who played the role in the pilot.[18] TNT canceled the series after its third season.[19]

In March 2010, Vartan announced his engagement to Lauren Skaar, whom he met in a Whole Foods Market parking lot in Los Angeles in 2009.[24] The couple married on April 2, 2011 at the Pelican Hill Resort in Newport Beach, California.[25] Skaar filed for divorce in July 2014, citing irreconcilable differences.[26]

Vartan has a dog named Maddie, with whom he appeared in a PETA video about good canine care and to whom he wrote a "love letter" for an anthology.[27] He is a keen supporter of Australian rules football, having watched the game on numerous visits to Australia, in particular Melbourne. He is good friends with Brendan Fevola and supports Carlton.[28] After the completion of the film Rogue, Vartan got a Southern Cross tattoo on his right arm to show his love for Australia.[29]

Vartan is also a fan of ice hockey,[30] a trait incorporated with his Michael Vaughn character on Alias.

Report a problem
Write to Michael Vartan at FanPal • 2022