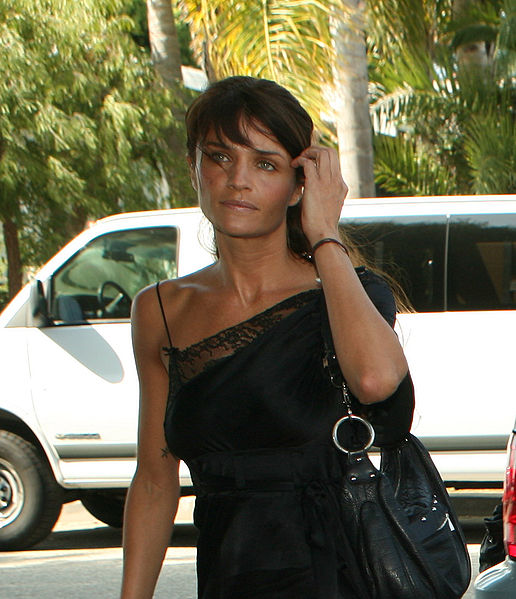 Helena Christensen (born 25 December 1968) is a Danish model and photographer. She is a former Victoria's Secret model and beauty queen. Christensen has also served as creative director for Nylon magazine, designed clothing, and supported funding for breast cancer organizations and other charities.

Christensen was born in Copenhagen, Denmark, as the eldest of two daughters of a Danish father and a Peruvian mother.[2][3] She is fluent in Danish, Spanish, and English as well as French and German.[4] Winning the Miss Universe Denmark crown in 1986, at the age of just 17,[5][6] she subsequently represented Denmark in the Miss Universe 1986 pageant.[7] The following year, she participated in the Look of the Year 1987 competition, where she was a finalist. Christensen left home soon after to pursue modeling in Paris.[8]
Read more...

Christensen appeared on over 650 magazine covers—including Vogue, Elle, Harper’s Bazaar, and W[9]—and in fashion campaigns (including Revlon, Chanel, Versace, Lanvin, Prada, Sonia Rykiel, Hermes, Valentino and Karl Lagerfeld) during the 1990s. She rose to prominence in the 1990s as one of the most popular models of her time and hailed as one of the supermodels by the media for her fame and popularity. One noted campaign featured her in a 20 by 40 feet (6 by 12 m) billboard in Times Square, bare, "except for a strategically placed banana leaf."[10] She was in the Victoria's Secret catalog and in their television commercials as one of the signature "angels", along with Tyra Banks, Karen Mulder, Daniela Pestova, and Stephanie Seymour. She also became a spokesmodel for Revlon cosmetics in 1992.[11] In 1991, she starred in the music video for Chris Isaak's song "Wicked Game".[12] The video was later featured on MTV's "Sexiest Video of All-Time", voted #4 on VH1's "50 Sexiest Video Moments", and voted #13 on VH1's "100 Greatest Videos".

In 1996, Frank DeCaro of the New York Times cited Christensen, along with Linda Evangelista, Christy Turlington, Cindy Crawford, Naomi Campbell, Elle Macpherson and Claudia Schiffer, as "The Magnificent Seven". DeCaro reflected, "Known by their first names to legions of fans, they are the legends of the modern catwalk, the girl next door pretty underneath all the paint".[13]

Christensen has continued to model. She graced the covers of Spanish Vogue (2011), British Harper’s Bazaar and ELLE, and American Vs. magazine. She was also featured in the advertising campaigns of Ermanno Screvino, Reebok, Charactere and Triumph. Christensen is signed to ZZO Management in Paris, D Management in Milan, Unsigned Management in London and 1/One Management in New York City.[12]

At a 2007 Sustainable/Green Home opening party

In September 2017, Christensen, along with models Claudia Schiffer, Naomi Campbell, Carla Bruni and Cindy Crawford, closed the Versace spring/summer 2018 fashion show, which was an homage to the late Gianni Versace.[14]

Christensen was creative director of Nylon magazine at its 1999 founding by publisher Marvin Scott Jarrett.[15][16][17][18] She launched her own clothing line, Christensen & Sigersen, with lifelong friend Leif Sigersen. The pair previously ran Butik, a shop in New York's West Village.[19][20] Christensen created a vintage clothing line, sold in her mother's store, the Yo-Yo Second Hand Shop, in Christianshavn, Copenhagen, Denmark.[21][22] In 2012, she created a lingerie collection, Helena Christensen for Triumph, for the UK-based lingerie brand.[23] Christensen's collaboration with Triumph started in 2008 as the face of the Triumph brand.

Aside from her modeling work, Christensen is an accomplished photographer herself, whose work has appeared in Nylon,[16] Marie Claire, and ELLE.[12] Her exhibition "A Quiet Story," curated by Jim Cook, premiered at the Locus Gallery in Rotterdam, 2006,[24] and HotelArena in Amsterdam, 2007.[25] Her exhibition "Far From, Close" appeared at Dactyl Foundation in 2008-09, to benefit International Center of Photography educational programs and Chernobyl Children's Project International.[26][27]

In 2014, Christensen worked on a photography series: Libery Ross, Liv Tyler, and The Pursuit of Grace. "I like doing personal, very intimate projects that don’t require a lot of pre-meetings".[28]

Christensen has traveled extensively and often finds herself on both sides of the camera. In 2016, she was announced as the "Global Explorer" for the Luxury Collection Hotels and Resorts. Her major project for the company was documenting a trip from the seaside town of Paracas to the colonial city of Cusco and the nearby Urubamba Valley.

Christensen partnered with Oxfam in 2009 to document the impact of climate change in Peru, where her mother was born. "Climate change in Peru is already devastating and we welcome Helena’s commitment to show this to the rest of the world," said Frank Boeren, Oxfam’s coordinator in Peru. "Peru is on the frontline of climate change, along with other developing countries, which have played little part in causing the problem".[29]

Christensen dated and lived with INXS frontman Michael Hutchence on and off in France and Denmark for five years in the early 1990s.[32] She was in a relationship with actor Norman Reedus for five years; together they have a son, Mingus Lucien Reedus (born 13 October 1999).[33] Reedus and Christensen separated in 2003.[34][35] She previously dated Interpol singer Paul Banks in 2008.[36]

Christensen has an apartment in Copenhagen and lives in Manhattan, where she drives "the only type of car I've ever had", a Morris Minor.[37][38] She reported in 2007 that she would be giving up her place in Monaco.[39]

Report a problem
Write to Helena Christensen at FanPal • 2023