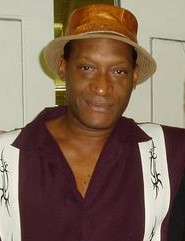 Anthony Tiran Todd (born December 4, 1954) is an American character actor, voice artist and film producer known for portraying Sergeant Warren in Platoon (1986), Kurn in Star Trek: The Next Generation (1990-1991), Ben in Night of the Living Dead (1990), the titular character in the Candyman horror trilogy (1992-1999), William Bludworth in the Final Destination franchise (2000-2011) and as the voice of the Fallen in Transformers: Revenge of the Fallen (2009).

Todd was born in Washington, D.C. and grew up in Hartford, Connecticut, attending local schools. He is also an alumnus of the Artists Collective, Inc. Tony attended the University of Connecticut and then went on to study theater at the Tony Award Winning Eugene O'Neill National Actors Theatre Institute.[2] and Trinity Rep Conservatory.
Read more...

Todd has acted on and off Broadway. Among his many roles are August Wilson's "King Hedley II", Athol Fugard's "The Captain's Tiger" for which he received the Helen Hayes nomination. Others include "Les Blancs", "Playboys of the West Indies", "Othello", "Zooman and the Sign", award-winning playwright Keith Glover's "Dark Paradise", "Aida" (on Broadway), and "Levee James" for the Eugene O'Neill Playwrights Conference and The New Dramatist Guild.[9][better source needed]

Todd is one of the few actors to have portrayed two different speaking roles on 24. He was initially cast as Detective Michael Norris in season three and four years later as General Benjamin Juma in both 24: Redemption and season 7.[8] He also played a major role in the Babylon 5 TV movie A Call to Arms.

In 2009, he played an undercover policeman in an episode of Psych.

Todd has also provided the voices of the Decepticon Dreadwing on Transformers: Prime, and Icon in Young Justice.

In 2015, Todd was cast as the disguised voice of Zoom in the second season of The Flash.

On October 12, 2018, it was confirmed by Bloody Disgusting that Todd will star in a recurring role in the third season of the slasher television series Scream.[10]

Report a problem
Write to Tony Todd at FanPal • 2023