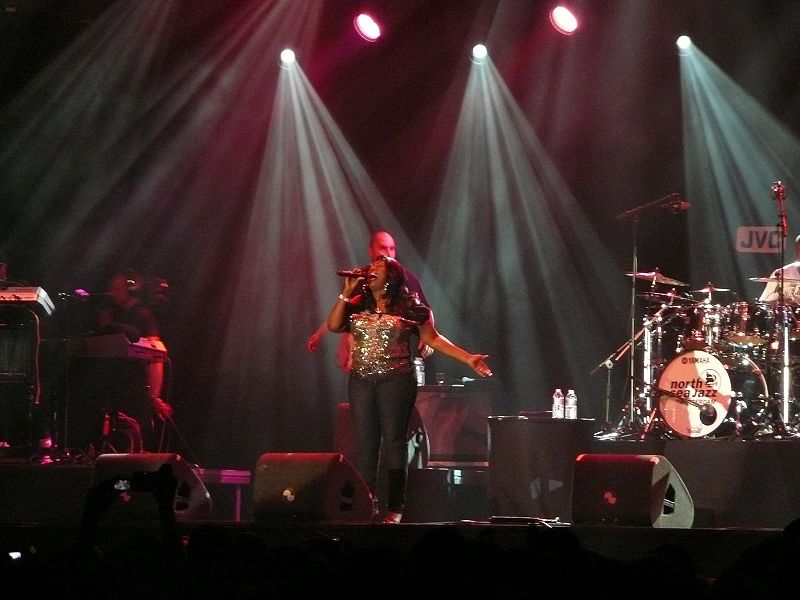 Angie Stone (born Angela Laverne Brown; December 18, 1961) is an American recording artist, producer, and actress. She rose to fame in the late 1970s as member of the hip hop trio The Sequence. Soon after, Stone began working with futuristic rap group Mantronix and singer Lenny Kravitz. In the early 1990s, she became a member of the R&B trio Vertical Hold.[1]

In 1999, Stone released her solo debut album Black Diamond on Arista Records, which was certified gold[1] and spawned the R&B single “No More Rain (In This Cloud)”. After the transition to J Records, she released another gold selling album,[1] 2001's Mahogany Soul, which included "Wish I Didn't Miss You", Stone's most successful single. She has since released five albums: Stone Love (2004), The Art of Love & War (2007), Unexpected (2010), Rich Girl (2012), and Dream (2015). Stone has appeared on television shows such as VH1’s Celebrity Fit Club and TV One's R&B Divas, and starred in movies such as The Fighting Temptations, Pastor Brown and School Gyrls.[1]

Stone has been nominated for three Grammy Awards. She has been most successful on the R&B charts, with four top 10 albums, including a number one, and 10 singles, including a top 10.

Stone was born in Columbia, South Carolina, where she began singing gospel music at First Nazareth Baptist Church, under the leadership of Reverend Blakely N. Scott. Her father, a member of a local gospel quartet, took Stone to see performances by gospel artists such as the Singing Angels and the Gospel Keynotes.[1]
Read more...

In the late 1970s, when Stone (then known as "Angie B.") was 16,[2] she formed the rap trio The Sequence, a female hip-hop/funk act consisting of Cheryl The Pearl and Blondie. They were the second rap group signed to the Sugar Hill Records after auditioning for Sylvia Robinson backstage at a Sugar Hill Gang concert in South Carolina. The Sequence had a hit in 1980 with "Funk You Up", which reached number 15 on the U.S. Top Black Singles chart, and a minor hit with "Monster Jam" featuring rapper Spoonie Gee. Stone notes that she was still underage at the time and thus unable to sign a contract. Meanwhile, Robinson sold the rights to "Funk You Up" to Dr. Dre, and members of The Sequence never received any royalties for this highly popular song. "It hurts because this was our first song ever by the first female rap group worldwide", Stone said.[3] The Sequence enjoyed a series of rap hits as the first female rap group during the early years of hip hop. Such hits as "Funky Sound (Tear The Roof Off)" kept the band touring with many of the Soul Bands of the day. Stone said that she and the other members of the group learned a lot from Robinson, who acted as their mentor.[3]

Stone then worked with Mantronix, before singing background on Lenny Kravitz's fifth studio album, 5. The Sequence faded into obscurity as hip hop changed from its original party sound to a more gritty street art form. Stone emerged during the 1990s as part of the trio Vertical Hold which released the popular single "Seems You're Much Too Busy" as well as two albums: A Matter of Time (1993) and Head First (1995).[4]

In 1996, Stone teamed up with Gerry DeVeaux (Lenny Kravitz's cousin) and Charlie Mole to form the group Devox. They recorded one album, Devox Featuring Angie B. Stone, released in Japan by Toshiba EMI. Selected cuts were featured on Gerry DeVeaux's Front Of The line via the UK Expansion Records, which also included Stone-penned material.[5] Stone shared songwriting credits on D'Angelo's first two studio albums, Brown Sugar (1995) and Voodoo (2000), as well as provided backing vocals when on tour with him.[6]

Stone's debut solo album, Black Diamond, was released on September 28, 1999, on Arista Records; the album was eventually certified gold by the RIAA. She then released Mahogany Soul on October 16, 2001 (which also went gold, on Clive Davis's J Records label), and Stone Love on July 6, 2004. Additionally Stone appears on 18 & 18 by Moby: 18 is the sixth studio album by American electronica musician Moby released in 2002. The most successful single from the album was "We Are All Made of Stars", which reached number 11 on the UK Singles Chart. A notable single on the album is "Extreme Ways" which appears on The Bourne Legacy. The album features guest appearances by Azure Ray, MC Lyte, Angie Stone, and Sinéad O'Connor. A collection of the album's B-sides and video footage was released a year later on 18 B Sides + DVD with Stone appearing in the tour footage.

Much of Stone's solo material has significant soul influences and features notable samples. For example, her first solo single, "No More Rain (In This Cloud)", samples Gladys Knight & the Pips' 1972 song "Neither One of Us (Wants to Be the First to Say Goodbye)", while "Wish I Didn't Miss You", Stone's most successful single, samples The O'Jays' 1972 song "Back Stabbers". The New York Times noted: " calls her music soul. Not funk, not R&B, not hip-hop, not urban, but soul, the secular pop with gospel fervor behind it."[7][8]

During an interview to BBC 1Xtra on August 27, 2006, Stone announced that she had signed to the reworked Stax Records. Her fourth studio album The Art of Love & War, a reference to her experiences in her final days at J Records, where it had become expected that she would help develop new talent, was released on October 15, 2007.[9] The lead single was "Baby" and featured Betty Wright. Its music video features cameo appearances by comedian Mike Epps and America's Next Top Model, Cycle 3 winner Eva Pigford. The song was nominated for Best R&B Performance by a Duo or Group with Vocals at the 2008 Grammy Awards.

Stone released her fifth studio album Unexpected in the UK on February 8, 2010, on Stax Records. Speaking to noted UK R&B writer Pete Lewis of the award-winning Blues & Soul in January 2010, she explained her ideas behind Unexpected: "Being as I've delivered four decent albums already, I felt it was safe to switch up and do something different this time. And musically overall I just wanted to have FUN! I wanted to do something that embodied a jam kinda feel, so that we could have some fun in concert and show people everything doesn't always have to be so serious."[10]

In addition to Mary J. Blige, Stone has worked as a songwriter with many other artists. She also played saxophone on the Lenny Kravitz Let Love Rule tour.[3]

Stone performed "The Prayer" in concert with Josh Groban, which was released on Josh Groban in Concert (2002).

She sang "Wade in the Water" in the civil rights documentary Soundtrack for a Revolution (2009).[17]

Stone performed a stand-up theatre play tour, titled Issues: We've Got Them All, in which she had a leading role.[citation needed]

Stone toured with Sisters in the Spirit in 2007. She also toured in Europe in May/June 2008 and performed at various Summer Festivals in the U.S. in summer 2008 (including three headlining June shows) and two in the Netherlands in August 2008.[citation needed]

in 2002 Angie Stone played The Store owner Madame Mambuza in the Movie The Hot Chick this was a short role but showcased her phenomenal acting in a comedy.[18] In 2003 Stone appeared in the role of Alma in the movie, The Fighting Temptations along with Cuba Gooding, Jr., Beyonce and Mike Epps.[19][better source needed]

Stone appeared on the VH1's reality television series Celebrity Fit Club for the fourth season, which began on August 6, 2006. While on the show, Stone lost eighteen pounds, the second lowest loss in the history of the show.[20]

Stone played a strip-club owner in the film Pastor Brown (2009).[10] Stone then played the Head Matron of an all-girls school in the film, School Gyrls (2010), directed by Nick Cannon, which featured many Def Jam artists.

Along with NeNe Leakes, Stone co-starred in the play, "Loving Him is Killing Me," that was performed in Washington, DC, Miami, and Philadelphia in May 2011. The play was written by Theo London and also starred Tyson Beckford and Christopher Williams.[21]

Stone and Brian McKnight, who starred together in Chicago on Broadway, toured nationally in a production of Hinton Battle's Love Lies, which started with an engagement at the Warner Theatre in Washington, D.C. on April 2-7, 2013. The cast also included Crystal Aikin, Elise Neal, Amber A. Harris, and Kier Spates.[22]

In 2013, Stone appeared on season two of TVOne's R&B Divas.[23][24][25] Faith Evans, who produces the show, wanted Stone on the show the first season but the timing didn't work out until the second season.[26] Stone's role is that of a mentor and life coach.[6]

Stone has 2 children. Stone's daughter, Diamond, was born in 1984 and is from her marriage to Rodney Stone (also known as Lil' Rodney C!, from the hip-hop group Funky Four Plus One). Diamond contributed background vocals to Stone's 2007 song "Baby".[27] During the 1990s, Stone dated neo soul singer D'Angelo for four years. Their son, Michael D'Angelo Archer II,[28] was born in 1998. Diamond gave birth to Stone's grandson in 2008 and another grandchild in July 2012.[4]

Stone lives in Atlanta, Georgia with her son, Michael and her daughter, Diamond.[9][29][30]

On March 9, 2015, Stone was arrested in her Atlanta-area home for knocking out the teeth of her daughter, Diamond, with a metal pole.[31]

Stone was diagnosed with Type 2 diabetes in 1999[32] and, along with comedian-actor Anthony Anderson,[33] was part of the F.A.C.E Diabetes (Fearless African-Americans Connected and Empowered) program sponsored by Eli Lilly,[2] which helps African Americans understand their risk for the disease and how to control it.[34] Stone said that both her mother and her mother's sister were diabetic.[35][36]