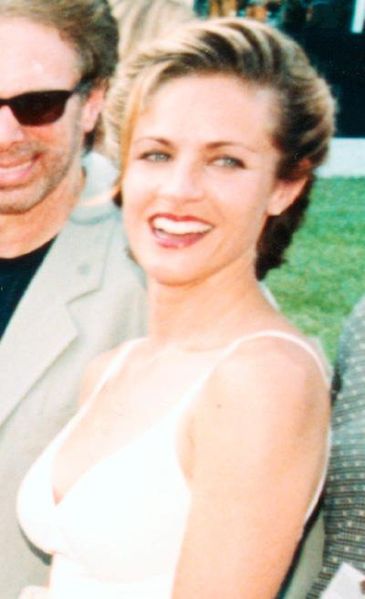 Jessica Steen (born December 19, 1965) is a Canadian film and television actress, noted for her roles in Captain Power and the Soldiers of the Future, Homefront, Earth 2, Armageddon, Left Behind: World at War, NCIS, Flashpoint and the CBC series Heartland.

Jessica Steen was born in Toronto, Ontario, the daughter of Joanna Noyes, an actress, and Jan Steen, a director and actor.[1] She is of Dutch and Scottish ancestry.

Aside from her entertainment career, Steen is an environmentalist and animal rights supporter. She supports David Suzuki, the World Society for the Protection of Animals and the Western Canadian Wilderness Committee, among others. She is a certified diver, and is skilled at several circus arts - including stilt-walking, fire-twirling, and fire-eating.

At the age of eight, Steen was cast in her first role in the Canadian children's television series, The Sunrunners, co-starring with her mother. In the 1986 TV movie Young Again she portrayed Tracy Gordon, the daughter of a character portrayed by Lindsay Wagner.[2]

In 1987, she was the only female regular on the syndicated series Captain Power and the Soldiers of the Future, which lasted one year. For her performance in the Captain Power episode, "Judgment", she was nominated for the Gemini Award in the "Best Performance by a Lead Actress in a Continuing Dramatic Role" category in 1988. In 1989, Steen broke onto the big screen with the movie musical Sing.[2]

While in Toronto, Steen garnered roles on Canadian series and American made-for-TV movies until 1991, when she elected to move to New York City. Six weeks after arriving there, she was chosen to replace actress Noelle Beck, who was on maternity leave, on the soap opera Loving. Her portrayal of Patricia Alden Sowolsky Hartman McKenzie caught the attention of ABC's casting department and led to her being cast in the series Homefront. Set in a small Cleveland suburb immediately after World War II, Homefront was critically acclaimed for its writing, ensemble cast, and historical insights. The series lasted two seasons.[2]

Steen at the Armageddon premiere, 1998

In 1994, she was cast as Dr. Julia Heller, a genetically enhanced doctor, in the NBC science fiction series Earth 2. While the show was canceled in 1995, the attention brought by the show allowed Steen to land guest appearances on other series, including The Outer Limits, ER, Murder One, The Pretender, The Practice, Due South, and Touched by an Angel. In 1994, she won the "Best Actress" Gemini Award, Canada's version of Emmy Awards, for her portrayal of Nora in the TV movie, Small Gifts.[2]

In 1997, she was cast as District Attorney Elizabeth Gardner in the movie Trial & Error, working with Jeff Daniels and Michael Richards, to whom she gave his first screen kiss. She prepared for the role with the help of a friend who was going through law school and by watching the closing arguments of Marcia Clark during the O. J. Simpson trial. Her performance earned a rave review from Roger Ebert on his syndicated show, Siskel & Ebert.[2]

Producer Jerry Bruckheimer recommended her for the role of the shuttle pilot in 1998's Armageddon because he remembered her portrayal of Cpl. Jennifer 'Pilot' Chase in Captain Power and the Soldiers of the Future. In 2004 Steen played Dr. Elizabeth Weir in "Lost City", the two-part finale of season 7 of Stargate SG-1. In Stargate Atlantis the part was instead played by Torri Higginson. She played lead roles in Slap Shot 2: Breaking the Ice and the Disney TV movies Smart House and Principal Takes a Holiday.[2]

She played Myra Teal in a 2002 episode ("Mr. Monk and the Billionaire Mugger") of Monk. She played a recurring character on the CBS crime drama NCIS, that of Special Agent Paula Cassidy, from 2004-07. In the fall of 2007 she landed featured multi-episode roles on two Canadian series, jPod and Heartland, both based on popular books of the same names.[2]

In 2009, Steen appeared in six episodes of the Canadian TV police drama Flashpoint (which is also broadcast on CBS in the U.S) as Strategic Response Unit Specialist Donna Sabine, filling in for Julianna 'Jules' Callaghan (played by Amy Jo Johnson), who was shot. She is currently playing the same character during a 2011 episode where she gets married and her husband is shot the same day. She reprised the role in the final episode of the third season. In the fall of 2010 she was nominated for a Gemini Award for the season two episodes.

Steen is currently filming her 10th season of CBC's Heartland as Lisa Stillman, the wife of series patriarch, Jack Bartlett.[3]