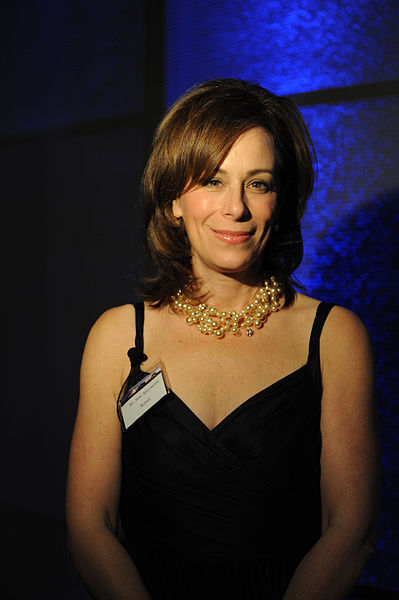 Jane Frances Kaczmarek (/kæzˈmærək/; born December 21, 1955) is an American actress. She is best known for playing the character of Lois on the television series Malcolm in the Middle (2000-06). Kaczmarek is a three-time Golden Globe and seven-time Emmy Award nominee.

Kaczmarek was born in Milwaukee, Wisconsin, the daughter of Evelyn (née Gregorska), a teacher, and Edward Kaczmarek, a US Department of Defense worker.[1][2][3] Of Polish ancestry,[4] she grew up in Greendale, where she was raised a Roman Catholic.[5] She majored in theater at the University of Wisconsin-Madison and later attended graduate school at the Yale School of Drama, where she was a part of its theater company.
Read more...

In 1998, Kaczmarek was cast as David and Jennifer's mother in the movie Pleasantville. She has had several Broadway hits, including Lost in Yonkers and Raised in Captivity, where she won an L.A. Drama Critics Circle Award. Her first television role was that of Margie Spoletto on For Lovers Only (1982). One of her first notable appearances was in the 1984 movie Falling in Love, starring Meryl Streep and Robert De Niro, playing the role of Ann Raftis, De Niro's character's wife. She also played a role in The Heavenly Kid in 1985 as Emily.

Kaczmarek has also appeared in over 40 television roles, the most notable including:

Malcolm in the Middle

In 2000, Kaczmarek was cast to play Lois Wilkerson in the sitcom Malcolm in the Middle.[6] TV Guide dubbed her role in the series as a "true breakout; a female Homer Simpson", and critics hailed her for her comic talents.[7] Later, Kaczmarek would credit the show for bringing out her comedic side, claiming, " I couldn't even get auditions for comedies. I played very unfunny people."[8] For her performance as Lois, Kaczmarek was nominated for seven Emmy Awards for Outstanding Lead Actress in a Comedy Series, holding the record of receiving the most Emmy nominations in this category without ever winning. She also earned three Golden Globe Award nominations, two Screen Actors Guild Award nominations, and garnered two Television Critics' Association Awards and the American Comedy Award and Family Television Award in 2001.

Following the end of Malcolm in the Middle, Kaczmarek went on to star in the short-lived series Help Me Help You co-starring Ted Danson. She starred in the short-lived TNT series Raising the Bar as Judge Trudy Kessler. She also continues to voice Judge Constance Harm on several Simpsons episodes.

On November 19, 2009, Kaczmarek played against Julie Bowen and Robin Quivers in the Jeopardy! Million Dollar Celebrity Invitational, on which she won $50,000 for a charity.

On July 22, 2011, it was confirmed that Kaczmarek will make a vocal appearance as Red Jessica in the television series Jake and the Never Land Pirates during its second season early 2012.[9]

In 2011, she guest starred in the FX comedy Wilfred, starring Elijah Wood.

Since 2011, she has appeared on Whitney as Whitney's mother.

In April 2012, she appeared in the David Lindsay-Abaire play Good People as Margie.

Kaczmarek reprised her role as Lois in an "alternate ending" featurette on the Breaking Bad DVD/Blu-ray box set that was released on November 26, 2013. In it, Hal wakes up from the nightmare that was the plot of Breaking Bad, in a nod to the final scene from Newhart.[11]

In 2014, she appeared as herself on The Comeback, auditioning for the role of Mallory Church in the fictional HBO series-within-a-series entitled Seeing Red.

In 2016, she appeared as a psychiatrist on The Big Bang Theory.

On October 9, 2018, she guest starred on the series This is Us as the mother of Rebeccas boyfriend.

Kaczmarek married fellow Wisconsin native and actor Bradley Whitford (The West Wing, Studio 60 on the Sunset Strip) on August 15, 1992. They lived in Los Angeles with their three children: Frances Genevieve (b. October 1997), George Edward (b. December 23, 1999) and Mary Louisa (b. November 25, 2002). Both were very active with charity, and were seen attending many major award shows together. She is the founder of "Clothes Off Our Back" which auctions celebrity clothing for children's charities. In June 2009, the couple filed for divorce after almost 17 years of marriage.[12][13] The divorce was finalized in October 2010.[14] One of the last times they were seen together publicly was in September 2008, at the opening of a Los Angeles production of The House of Blue Leaves,[15] in which Kaczmarek was starring. According to a June 2009 magazine interview with More.com conducted prior to announcement of the divorce, she replied "That's a big no comment" when asked to sum up her love life. She also added that she used to believe that she could "go it alone and as long as I had some fabulous boy on my arm, or man, and my career was sailing, that's all I needed" whereas she now had grown to appreciate the support of her girlfriends "to talk about kids, to talk about marriages, to talk about just life".[16] In 2010, they sold their villa, a former mansion, in San Marino, California.[17]

Kaczmarek underwent a hip replacement in April 2004, due to chronic arthritis.[18] She recovered quickly, and used an X-ray of her new hip for her Emmy campaign the following summer, advertising herself as "the only Emmy nominee with an artificial hip (except for Anthony LaPaglia)".[19]

In 2006, Kaczmarek and Malcolm in the Middle co-star Erik Per Sullivan contributed the afterword for the children's book Together that shows the importance of domestic animals to impoverished people in the world, inspired by the mission of the nonprofit charitable organization Heifer International.

Report a problem
Write to Jane Kaczmarek at FanPal • 2023