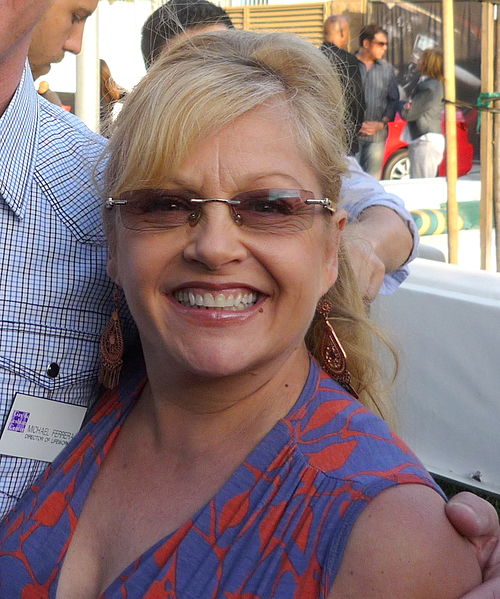 Charlene L. Tilton (born December 1, 1958) is an American actress and singer.[1][2] She is best known for playing Lucy Ewing, the saucy niece of John "J.R." Ewing Jr. (played by Larry Hagman), on the television series Dallas.

Tilton had early roles on such television series such Happy Days and Eight Is Enough. She made her first film appearance alongside Jodie Foster in Freaky Friday (1976). In 1978, Tilton made a cameo appearance in the John Milius film Big Wednesday. The following year, she made her big break by landing the role of Lucy Ewing, the sly, vixenish, frequently frustrated granddaughter of John "Jock" Ewing Sr. and the former Eleanor "Ellie" Southworth on the television series Dallas, alongside actors Jim Davis, Barbara Bel Geddes, and Larry Hagman, from 1978 to 1985 and from 1988 to 1990. She also appeared on one episode of the series' spin-off Knots Landing in 1980. At the height of her Dallas fame, she received $50,000 salary per episode, appeared on 500 magazine covers, and drew 65 million viewers for her 1981 TV wedding.[3]

Tilton is also a singer, lending her vocal ability to a 1978 episode of Dallas titled "Runaway", in which Greg Evigan guest-starred. In 1984, she released the dance-pop single "C'est La Vie", which became a hit in several European countries, though not in the United States. She appeared on Circus of the Stars in 1979 and 1991, on one occasion acting as a knife thrower's target girl while dressed in a gold bikini. Tilton also appeared on game shows, including being a panelist on the 1979-1982 syndicated version of Match Game. She also hosted the pilot for a potential revival of the show in syndication as Match Game 2/MG2 in 1996.

Tilton was the guest host on an episode of Saturday Night Live on February 21, 1981, which featured a parody of the famed "Who shot J.R.?" episode of Dallas. In the episode, cast member Charles Rocket was shot in the chest by a sniper while doing a sketch about a sexy couple (with Gail Matthius as his partner) bathing a dog and spouting innuendo. At the end of the show, during the "goodbyes", Tilton asked Rocket how he felt about being shot. In character, Rocket improvised, "Oh, man, it’s the first time I've ever been shot in my life. I'd like to know who the fuck did it."[4] The improvisation by Rocket, which violated FCC broadcast standards, led to his dismissal from the show's cast.

Tilton appeared in a number of commercials for the Abdominizer line of direct-market workout equipment in the 1990s. She appeared as herself in an episode of Married... with Children which sent up her involvement with the Abdominizer. In addition, she has appeared in several send-up comedies, such as The Silence of the Hams (1994), Superhero Movie (2008), and Paranormal Calamity (2010). In 2005, she appeared in the British reality television show The Farm.

In 2001, Tilton was honored by the Young Artist Foundation with its Former Child Star "Lifetime Achievement" Award for her role as Lucy Ewing on the original Dallas television series.[5] In January 2012, Tilton was a contestant on the British ice-skating show Dancing on Ice in its seventh season, in which she was paired with American figure skater Matthew Gonzalez. Tilton was voted out of the competition, though, in week five of a 12-week run.[6]

In 2012, Tilton joined the cast of TNT's Dallas revival series, and reprised her role as Lucy Ewing in a number of episodes.[7][8]

Tilton was born on December 1, 1958, in San Diego, California, the daughter of Katherine Thacker, a secretary;[9] she grew up not knowing her father and with few financial resources available to her mother or her.[citation needed]

Tilton was married to country singer Johnny Lee from 1982 to 1984. She has one daughter, Cherish Lee, born in 1982. In 2001, Tilton began dating cinematographer Cheddy Hart. The couple enjoyed boating and lived together in a modest home in Oxnard, California. In December 2009, Hart suddenly died of heart failure at age 54.

Tilton is a strong advocate for autism awareness in the media. She is currently the ambassador for Actors for Autism, an organization that leads improv and acting workshops for children and adults with autism. She approached AFA in 2010 with the desire to volunteer and has been affiliated with them ever since.[10]

When she was in high school, while her mother was mentally ill and was raised without a father, the young, unfamiliar actress met Larry Hagman, whom she regarded as a surrogate father. Then, a few years later, at age 17, she auditioned and won the role of Hagman's confused niece, Lucy Ewing, on Dallas. The two had a remarkable on- and off-screen chemistry, for the show's first eight seasons, and they also danced together, off-camera. When she left the show, at the end of the eighth season, her contract had expired, and Hagman was very disappointed about her letting go. She said of Hagman, in 1988, "He called me and said, ‘You’re certainly a good actress—we never realized.’ I think Larry went to bat for me to come back on the show."[11] That same year, she came back to the show, and stayed on for two more seasons, until her departure in 1990, a year before the series' finale. After Dallas, Tilton remained on good terms with Hagman, and cared about her TV uncle's failing health, when in 1995, Hagman needed a liver transplant, after being diagnosed with liver cancer, and survived. She did not appear in any of the Dallas TV reunion movies, but appeared in the Dallas Reunion: The Return to Southfork, in late 2004, to reminisce the show's history. Before this, in September 2001, she was the only Dallas member to attend her TV's uncle's 70th birthday; then, 11 years later, she was reunited with Hagman, for the last time, to star in the second incarnation of Dallas. This was prior to her acting mentor undergoing therapy for his cancer. When Hagman passed away on November 23, 2012, due to complications from myelodysplastic syndrome, she was devastated, but did not attend his funeral. Upon his death, Tilton released a statement: "At seventeen years old, my life took a turn that one could only dream of. I was cast as Lucy Ewing in the iconic show Dallas. Dallas was so much more than a television phenomenon to me. It was my family. I grew up with a mentally ill single mother raising me and no father figure in my life. I lived on my own in an apartment from the age of 15. I remember the day I met the force of nature that is Larry Hagman like it was yesterday. (It was actually 35 years ago). My Uncle Larry became the father figure that I so needed and longed for. He taught me how to be professional, work hard, but have fun at the same time, and how to respect the opportunities I was blessed to have been given. He was very protective because I was so young, but also expected the best from me on the set of Dallas. He was one of the best actors the world has ever known. To me, he will always be my Uncle Larry. I am so so very sad, but cherish the lifetime of memories I have with him."[12]

Report a problem
Write to Charlene Tilton at FanPal • 2023