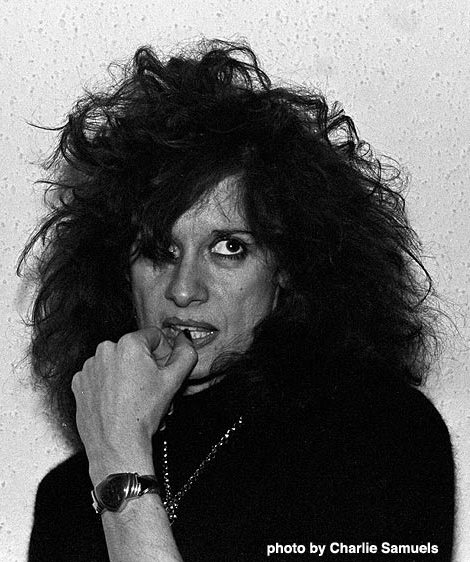 Penelope Spheeris (born December 2, 1945 or 1946; sources differ)[1][2][3] is an American film director, producer and screenwriter. She has directed both documentary film and scripted films. Her best known works include the trilogy titled The Decline of Western Civilization, each covering an aspect of Los Angeles underground culture,[4] and the film Wayne's World, her highest-grossing film.[5]

Spheeris was born in New Orleans, Louisiana, to a Greek immigrant father who owned the Magic Empire Shows carnival and was a side-show strong man. Her mother was a ticket taker for a traveling carnival.[1] Spheeris has three full siblings and a number of older half-siblings from her father's first marriage.[6] She is a sister of singer Jimmie Spheeris[7] and a first cousin of musician Chris Spheeris,[7] and the Greek-French director Costa Gavras,[7] which she says has made her consider that there is a genetic component to her vocation.[7]

Spheeris spent her first seven years traveling around the American South and American Midwest with her father's carnival.[8] Her father was shot and killed in Troy, Alabama after intervening in a racial dispute. In a 2015 interview, Spheeris stated that her father had come to the aid of an African American man who had been struck on the back of the head with a cane by a white man over a dispute about cutting in front of him in line. The white man soon after returned and shot Spheeris' father dead. She states that her father's killer served no jail time, the man's legal defence apparently resting entirely on the claim that he was justified in murdering Spheeris senior as "he was defending a black."[6]

After her father's death, Spheeris and her three siblings moved with their mother to California, generally living in trailer parks with a succession of stepfathers.[9] She spent her teenage years in Orange County, graduating from Westminster High School with a daunting 'most likely to succeed' label. After high school, Spheeris attended Long Beach State College where she majored in art. She admired the teachings of George Falcon, a behavioural scientist. From his influence, Spheeris went on to study psychobiology at the University of California, Irvine, in Orange County, California, southeast of Los Angeles.[10]

Working as a waitress at Denny's and IHOP, she put herself through film school. She majored in film and has a Master of Fine Arts degree in Theater Arts from UCLA in Los Angeles, California.[11]

Spheeris launched her career by producing short subjects for comedian Albert Brooks, many of them being highlights in the first season of the television series Saturday Night Live. Her first feature film was The Decline of Western Civilization (1981), a punk rock documentary that she produced as well as directed. She followed up with The Decline of Western Civilization Part II: The Metal Years, this time about the Los Angeles heavy metal scene of 1988, with footage and interviews of legendary metal bands such as Kiss, Ozzy Osbourne, Aerosmith, Megadeth and Motörhead. She later returned to the streets of Los Angeles and the punk rock scene in 1998 for the documentary The Decline of Western Civilization Part III. She was offered the chance to direct This is Spinal Tap, but declined.[12]

In addition, she worked as a writer for the television series Roseanne (1988-1997). In the 1990s, she directed Wayne's World, a comedy based on Mike Myers' skits from Saturday Night Live. The movie grossed over $183 million and became a popular hit. She directed the Wayne's World music video work for Queen's "Bohemian Rhapsody", which earned a Grammy Award nomination.[11] She had difficulty working with Myers, while acknowledging him as "profoundly talented," and in an Entertainment Weekly article stated she believes Myers dissuaded Paramount Pictures from hiring her for the sequel.[13]

In 1996, she directed We Sold Our Souls for Rock 'n Roll, a documentary about the Ozzfest, produced by Sharon Osbourne, which explored life on the road.[11]

Other films Spheeris has directed include The Beverly Hillbillies; The Little Rascals (for which she co-wrote the screenplay); the Chris Farley comedy Black Sheep; the Marlon Wayans-David Spade team-up Senseless;[11] and The Kid & I starring Tom Arnold.[11] In 2006, she was set to direct the still-unfilmed Gospel According to Janis, about Janis Joplin.[11]

The Portland Oregon Women's Film Festival named Spheeris its guest of honor for 2013.[14]

Spheeris has a daughter, director Anna Spheeris Fox, born in 1969.[17]

Since 1998 Spheeris has been in a relationship with Sin whom she met while filming the documentary The Decline of Western Civilization III.[18]

Critical, public, and commercial reception to films Spheeris has directed.

Report a problem
Write to Penelope Spheeris at FanPal • 2022