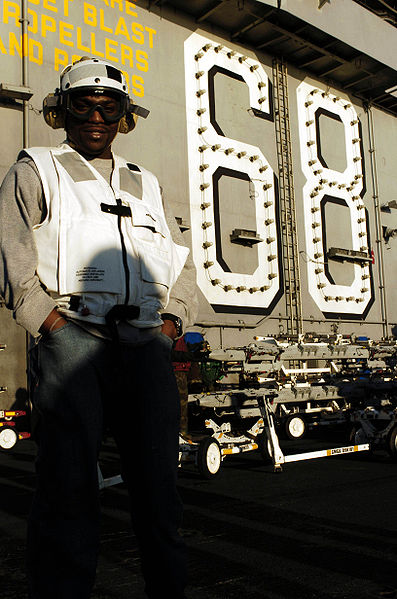 Mekhi Phifer (/mɛˌkaɪ ˈfaɪfər/; born December 29, 1974)[1][2] is an American actor. He portrayed Dr. Greg Pratt on NBC's long-running medical drama ER and had a co-starring role opposite Eminem in the feature film 8 Mile. He was a regular on the Fox crime show Lie to Me in the role of Ben Reynolds before season three, and also starred as CIA agent Rex Matheson in Torchwood: Miracle Day.

Phifer was born in Harlem, New York City. He grew up in a single-parent household with his mother, Rhoda Phifer, a high-school teacher.[3]
Read more...

In 1994, Phifer attended an open-casting call for director Spike Lee's Clockers, beating over a thousand others to get the lead role as a narcotics dealer embroiled in a murder cover-up.[2] He followed that role with another in the comedy spoof feature High School High (which also starred his former wife Malinda Williams) and continued by co-starring in the horror film I Still Know What You Did Last Summer, starring Jennifer Love Hewitt and Freddie Prinze, Jr.

He portrayed Dr. Gregory Pratt on the medical drama ER, which he started in April 2002. Phifer left the show in September 2008, in the first episode of Season 15. His character died during the conclusion of the season 14 finale cliffhanger involving an ambulance explosion that was rigged to kill an injured FBI informant (Steve Buscemi). During his six years in the show, he was nominated twice for an NAACP Image Award.

Phifer on the flight deck of USS Nimitz in 2004.

Phifer's television credits include the movies The Tuskegee Airmen (1995), HBO's Subway Stories: Tales from the Underground (1997), and Brian's Song (2001) (as former Chicago Bear Gale Sayers). He received additional notice for his performance opposite singer Beyoncé Knowles (from Destiny's Child) on MTV's alternative take on the Carmen legend with the movie Carmen: A Hip Hopera (2001). Phifer had a recurring guest role in Seasons 5 and 6 of Homicide: Life on the Street, portraying "Junior Bunk", the troubled nephew of Baltimore drug lord Luther Mahoney, and also guest-starred in New York Undercover. Likewise, he earned an NAACP Image Award nomination for another TV movie, A Lesson Before Dying, opposite Don Cheadle. In 2009, Phifer began a guest-starring arc on the Fox drama Lie to Me.[4]

Among Phifer's other big-screen credits are Soul Food, The Biography of Spud Webb, Hell's Kitchen, NYC, Tears of a Clown, O (as the titular character Odin a.k.a. O), and the thriller Uninvited Guest (as Silk). He appeared in Impostor as well as Paid in Full, an urban classic, that has given him notorious recognition as he portrayed Mitch and director Curtis Hanson's 8 Mile, opposite Eminem. He is mentioned in the Grammy- and Academy Award-winning song "Lose Yourself" by Eminem.

Phifer starred as Agent Collins in the fourth season of White Collar.

Phifer made a guest appearance on the sitcom series Husbands in its second season.[5]

In fall 2016, he joined the TV series Frequency as a series regular.

Phifer was the 2004 winner of the Celebrity Poker Showdown Championship, defeating Neil Patrick Harris during the fourth season. Phifer plays on the World Poker Tour in the Hollywood Home games for the Love Our Children USA charity. Phifer is chairman of the board of trustees of The Vine Group USA.[8] a non-profit organization established in 2000 to provide educational resources to universities in Africa. He has signed up with Full Tilt Poker. He has his own well on the poker forum 2+2.

Phifer is an owner of a number of Athlete's Foot athletic shoe store franchises in California.[2]

In January 2011, Mekhi Phifer launched Third Reel Films[9] The stated mission of the company is to provide an environment for filmmakers to showcase their work to entertainment representatives, acquisition executives and other key-industry professionals.