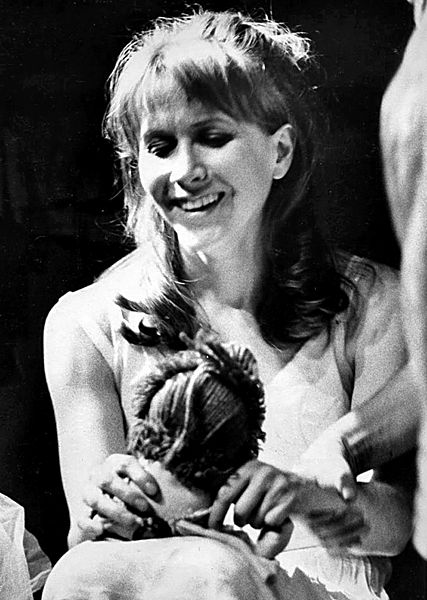 Debuting on Broadway in 1945, much against the wishes of her mother who wanted her to 'come out' as a society debutante, she was acclaimed for a complex performance as an isolated 12-year-old girl in the 1950 play The Member of the Wedding and the following year her range was demonstrated as Sally Bowles in the original production of I Am a Camera, for which she won her first Tony award. She appeared in a film version in 1955 and the director Elia Kazan cast her opposite James Dean in East of Eden. After a lull in the quality of motion pictures she had parts in, the '60s saw Harris gave acclaimed performances in classic films, including The Haunting and what is sometimes considered the screen role that allowed her to best display her talents Reflections in a Golden Eye in which she played opposite Marlon Brando. Known for her attention to preparation and research, Harris's superb intonation and phrasing gave her a pleasing silvery voice. A rare Method acting star actress, she won Tony awards for The Lark (1956), Forty Carats (1969), The Last of Mrs. Lincoln (1973), and The Belle of Amherst (1977). She also won three Emmy Awards, a Grammy Award, and was nominated for the Academy Award for Best Actress for the 1952 film The Member of the Wedding.

She was inducted into the American Theatre Hall of Fame in 1979, received the National Medal of Arts in 1994,[1] and the 2002 Special Lifetime Achievement Tony Award.[2]

Julia Ann Harris was born in Grosse Pointe, Michigan, the daughter of Elsie L. (née Smith), a nurse, and William Pickett Harris, an investment banker and authority on zoology.[3] She had an older brother, William, and a younger brother, Richard.[4] She graduated from Grosse Pointe Country Day School, which later merged with two others to form the University Liggett School. In New York City, she attended The Hewitt School.[5] As a teenager, she also trained at the Perry-Mansfield Performing Arts School & Camp in Colorado with Charlotte Perry, a mentor who encouraged Harris to apply to the Yale School of Drama, which she soon attended for a year.[6] Harris was an early member of of Lee Strasberg's Actor's Studio and was able to successfully use the techniques of Method acting, which have been found difficult to shine with in female roles.[6]

In 1952, Harris won her first Best Actress Tony for originating the role of insouciant Sally Bowles in I Am a Camera, the stage version of Christopher Isherwood's Goodbye to Berlin (later adapted as the Broadway musical Cabaret (1966) and as the 1972 film, with Liza Minnelli as Sally). Harris repeated her stage role in the film version of I Am a Camera (1955).

Of particular note is her Tony-winning performance in The Belle of Amherst, a one-woman play (written by William Luce and directed by Charles Nelson Reilly) based on the life and poetry of Emily Dickinson. She received a Grammy Award for Best Spoken Word Recording for the audio recording of the play. She first performed the play in 1976 and subsequently appeared in other solo shows, including Luce's Bronte.[7] Other Broadway credits include The Playboy of the Western World, Macbeth, The Member of the Wedding, A Shot in the Dark, Skyscraper, And Miss Reardon Drinks a Little, Forty Carats, The Glass Menagerie, A Doll's House, and The Gin Game, and a North American tour in 1992 of Lettice and Lovage in the lead part originated by Maggie Smith on Broadway.

In 1983, Harris also became a company member of The Mirror Theater Ltd's Mirror Repertory Company.[8] Julie Harris became a mentor to the company, having urged Founding Artistic Director Sabra Jones to create the company from 1976 forward, when Jones married John Strasberg. Harris and Jones met at a performance of The Belle of Amherst, a revival of which The Mirror Theater Ltd recently performed in their summer home in Vermont.[9]

With Chita Rivera, Harris holds the record for the most individual Tony Award nominations, with 10 nominations. She held the record for most competitive Tony wins (five) until Angela Lansbury tied her in 2009. Audra McDonald has passed them both, with six acting Tony Award wins.[2] In 1966, Harris won the Sarah Siddons Award for her work in Chicago theatre.

Harris's screen debut was in 1952, repeating her Broadway success as the lonely teenaged girl Frankie in Carson McCullers' The Member of the Wedding, for which she was nominated for the Academy Award for Best Actress. Harris played the ethereal Eleanor Lance in The Haunting (1963), director Robert Wise's screen adaptation of a novel by Shirley Jackson, a classic film of the horror genre. Another cast member recalled Harris maintaining a social distance from the other actors while not on set, later explaining that she had done so as a method of emphasizing the alienation from the other characters experienced by her character in the film. She reprised her Tony-winning role as Mary Todd Lincoln in The Last of Mrs. Lincoln (1973) in the film version (1976). Another noteworthy film appearance was the World War II drama The Hiding Place (1975). She also appeared in such films as East of Eden (also 1955), with James Dean (with whom she became close friends), Requiem for a Heavyweight (1962), with Paul Newman in the private-detective film Harper (1966), and Reflections in a Golden Eye (1967).

For her television work, Harris had won three Emmy Awards, and had been nominated 11 times. One of her most famous television roles was as Queen Victoria, in the 1961 Hallmark Hall of Fame production of Laurence Housman's Victoria Regina, for which she won an Emmy. Earlier, also for the Hallmark Hall of Fame, she starred as Nora Helmer opposite Christopher Plummer in A Doll's House (1959), a 90-minute television adaptation of Ibsen's play. She made more appearances in leading roles on the Hallmark program than any other actress, also appearing in two different adaptations of the play Little Moon of Alban.[10] In her later career, she was perhaps best known as country singer Lilimae Clements, the eccentric and protective mother of Valene Ewing (played by Joan Van Ark) on Knots Landing. The role was as a guest appearance in 1980 before returning as a series regular from 1981-87. In 1986, she provided the voice-over of the adult Clara in Nutcracker: The Motion Picture.

On December 5, 2005, she was named a Kennedy Center Honoree. At a White House ceremony, President George W. Bush remarked, "It's hard to imagine the American stage without the face, the voice, and the limitless talent of Julie Harris. She has found happiness in her life's work, and we thank her for sharing that happiness with the whole world."[11]

Harris continued to work until 2009, well into her eighties, narrating five historical documentaries by Christopher Seufert and Mooncusser Films, as well as being active as a director on the board of the independent Wellfleet Harbor Actors Theater.[12] She also did extensive voice work for documentary maker Ken Burns: the voices of Emily Warren Roebling in Brooklyn Bridge, Ann Lee in The Shakers: Hands to Work, Hearts to God, Susan B. Anthony in Not For Ourselves Alone: Elizabeth Cady Stanton and Susan B. Anthony and most notably Southern diarist Mary Boykin Chesnut for Burns' 1990 series The Civil War.

In the summer of 2008, she appeared on stage again in Chatham, Massachusetts as "Nanny" in a Monomoy Theater production of The Effect of Gamma Rays on Man-in-the-Moon Marigolds.[13]

Harris lived in West Chatham, Cape Cod, for many years until her death.[14] Three times divorced, she had one son, Peter Gurian. A breast cancer survivor,[5] she suffered a severe fall requiring surgery,[when?] a stroke in 2001, and a second stroke in 2010.[15]

Harris died on August 24, 2013, of congestive heart failure at her home in West Chatham, Massachusetts.[16][11] Ben Brantley, theater critic for The New York Times, considered her "the actress who towered most luminously ... rather like a Statue of Liberty for Broadway."[17] Alec Baldwin, with whom she appeared in Knots Landing, praised her in a tribute in the Huffington Post: "Her voice was like rainfall. Her eyes connected directly to and channeled the depths of her powerful and tender heart. Her talent, a gift from God."[18] Harris was cremated after her death.[19]

On August 28, 2013, Broadway theaters dimmed their lights for one minute in honor of Harris.[20]

Julie Harris and James Dean in East of Eden (1955)

Report a problem
Biography of Julie Harris at FanPal • 2022