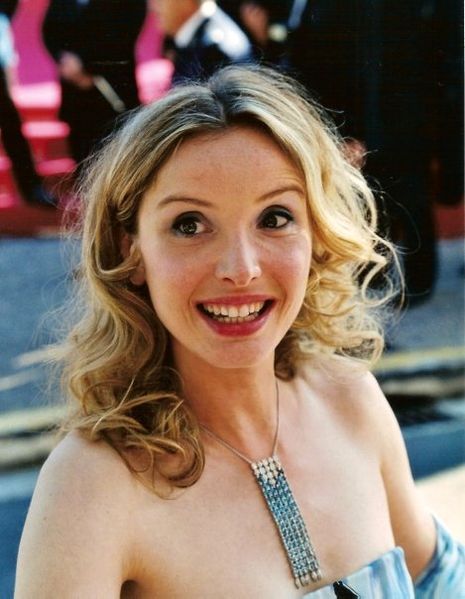 Julie Delpy (born 21 December 1969) is a French-American actress, film director, screenwriter, and singer-songwriter. She studied filmmaking at New York University's Tisch School of the Arts and has directed, written, or acted in more than 30 films, including Europa Europa (1990), Voyager (1991), Three Colors: White (1993), Before Sunrise (1995), An American Werewolf in Paris (1997), Before Sunset (2004), 2 Days in Paris (2007), and Before Midnight (2013). She has been nominated for three César Awards, two Online Film Critics Society Awards, and two Academy Awards. After moving to the United States in 1990, she became an American citizen in 2001.[1][2]

Julie Delpy was born in Paris, the only child of Albert Delpy, a French actor and theater director, and Marie Pillet, a French actress in feature films and the avant-garde theater. Her mother was also known for having signed the 1971 Manifesto of the 343 Bitches, which was signed by women advocating for reproductive rights and admitting to having had an abortion when abortions were illegal in France. In Delpy's 2007 film 2 Days in Paris, her character's mother was played by her real mother and acknowledges signing the manifesto, mirroring her action in real life. Pillet died in 2009.

At an early age, Julie was exposed to the arts by her parents. She later said:

I couldn't hope for better parents. They really raised me with a love of art, bringing me to museums and seeing things that a child wouldn't see at that age. I would see Ingmar Bergman movies when I was 9 and totally go for it. And they would bring me to see Francis Bacon's paintings, which I loved: so dark and at the same time it's so wonderful.[3]

In 1984, at the age of fourteen, Delpy was discovered by film director Jean-Luc Godard, who cast her in Détective (1985). Two years later, Delpy starred in the title role in Bertrand Tavernier's La Passion Béatrice (1987). For her performance, Delpy was nominated for a César Award for Most Promising Actress. She used the money she earned to pay for her first trip to New York City. Delpy became an international celebrity after starring in the 1990 film Europa Europa directed by Agnieszka Holland. In the film, she plays a young pro-Nazi who falls in love with the hero, Solomon Perel, not knowing that he is Jewish. She did not speak German so she performed her role in English and was later dubbed over.[citation needed]

Following the success of Europa Europa, Delpy appeared in several Hollywood and European films, including Voyager (1991) and The Three Musketeers (1993). In 1993, she was cast by director Krzysztof Kieślowski to play the female lead in Three Colors: White, the second film of Kieślowski's The Three Colors Trilogy. Delpy also appeared briefly in the other two films in the same role.[4][5] That same year, she appeared opposite Brendan Fraser in the Percy Adlon feature Younger and Younger starring Donald Sutherland. In 1994, she starred opposite Eric Stoltz in Roger Avary's directorial debut Killing Zoe, a cult heist film capturing the Generation X zeitgeist.

Delpy is best known for her co-starring role with Ethan Hawke in director Richard Linklater's 1995 film Before Sunrise, for which she wrote much of her own dialogue.[6] The film received glowing reviews[7] and was considered one of the most significant films of the 1990s' independent film movement. Its success led to the casting of Delpy in the 1997 American film An American Werewolf in Paris.[8]

In late 2001, she appeared alongside comedian Martin Short in the 30-minute film CinéMagique, a theatre-show attraction presented several times daily at Walt Disney Studios Park in Disneyland Paris. Delpy attended the March 2002 opening of the park and the inauguration of the film-based attraction which sees her star as Marguerite—a female actress with whom Short's character, George, falls in love as he stumbles through countless classic movies. CinéMagique won the 2002 Themed Entertainment Association award for "outstanding" themed attraction. Delpy reprised her Before Sunrise character, Céline, with a brief animated appearance in Waking Life (2001), and again in a 2004 sequel, Before Sunset. The later film was well received and earned Delpy, who co-wrote the script, her first Academy Award nomination for Writing Adapted Screenplay. In addition, she has been nominated for César Awards three times.

Delpy in San Francisco in 2011

Delpy has had an interest in a career as a film director since her childhood, and enrolled in a summer directing course at New York University. She wrote and directed the short film Blah Blah Blah in 1995 which screened at the Sundance Film Festival. In 2004 Delpy co-wrote Before Sunset, a sequel to the 1995 movie Before Sunrise, with director Richard Linklater and co-star Ethan Hawke. Describing the experience Delpy said, "I'm not a feminist wearing overalls and hating the male gender. But I'm a definite feminist. I don't want to make Before Sunset into a little male fantasy, ever."[9] She received an Academy Award nomination for Best Adapted Screenplay for her work. She made her feature length directorial debut in 2002, with a film entitled "Looking for Jimmy" which she also wrote and produced. In 2007, Delpy directed, wrote, edited, and co-produced the original score for 2 Days in Paris co-starring Adam Goldberg. The film also features Delpy's real-life parents, Marie Pillet and Albert Delpy, as her character's parents. In one scene, Pillet's character acknowledges having been one of the "343 bitches"; in real life, Pillet was one of the signers of the Manifesto of the 343 bitches.[10]

In 2009, Delpy starred in The Countess, also her third film as a director in which she played the title role of Elizabeth Báthory. The film also starred Daniel Brühl, and William Hurt. In 2011 Delpy wrote and directed Le Skylab. The film received a theatrical release in France, but failed to find distribution in the U.S. In 2012 she released 2 Days in New York, a sequel to her 2007 film 2 Days in Paris. The film starred Delpy and actor Chris Rock. Delpy stated that she wrote the role specifically for Rock. In 2013, Delpy reunited with Richard Linklater and Ethan Hawke to write Before Midnight, the sequel to Before Sunrise and Before Sunset. Delpy again starred with Hawke, and the film premiered at the 2013 Sundance Film Festival. It went on to screen out of competition at the Berlin International Film Festival and was released in May 2013. Delpy was later nominated for a Best Adapted Screenplay at the Academy Awards alongside Richard Linklater and Ethan Hawke.[11] Responding to criticism regarding the nudity in the film in an interview with GQ Magazine, Delpy remarked:

Some people were like, 'it's not feminist. You're showing your tits and he's not showing his ass.' isn't it the people who are hiding women behind layers of clothes who are the misogynists? I'm a real person, so it's a statement to say, 'Alright, I'm a forty year-old woman, and this is what you get with no plastic surgery.'[12]

Lolo was Delpy's second French-language feature film. It was also the first film she directed since 2 Days in New York. She has also written and directed the HBO movie Cancer Vixen, starring Cate Blanchett as Marisa Acocella Marchetto, a cartoonist for The New Yorker who is diagnosed with cancer.[13] In early 2014 Delpy announced her next writing-directing project would be called A Dazzling Display of Splendor and focus on a family of vaudeville performers.[14]

Delpy courted controversy in 2016 after the Oscar nominations showed no black honorees on the ballot. "Two years ago, I said something about the Academy being very white male, which is the reality, and I was slashed to pieces by the media...It's funny — women can't talk. I sometimes wish I were African American because people don't bash them afterward."[15]

Delpy is also a musical artist. She released a self-titled album, Julie Delpy in 2003. Three tracks from the album-"A Waltz For A Night," "An Ocean Apart," and "Je t'aime tant"-were featured in Before Sunset. She also sings Marc Collin's "Lalala" over the closing credits of 2 Days in Paris, for which she also wrote all of the original score. She also wrote the music for her 2009 movie The Countess.

Delpy moved to New York in 1990 and moved to Los Angeles a few years after that. She has been a naturalized citizen of the United States since 2001, although she also retains her French citizenship. She now divides her time between Paris and Los Angeles.[16] From 2007 to 2012, she was in a relationship with German film score composer Marc Streitenfeld.[17] The couple's son, Leo, was born in January 2009.[18] In a BBC Radio 4 interview broadcast on 29 March 2018, Delpy referred to her husband, though she did not name him.[19]

Delpy has expressed her commitment to correcting inaccurate assumptions regarding feminism, telling IndieWire "I'm very dedicated to feminism even if I'm a feminist, I don't think all women are perfect. If we're equal to men, we are also imperfect like men... try to say think that women are better than men, and I want to tell them, 'no'."[20]

Delpy has said she has been plagued by health problems since childhood and had to wear callipers at age eight. She also occasionally experiences migraines and panic attacks.[3]