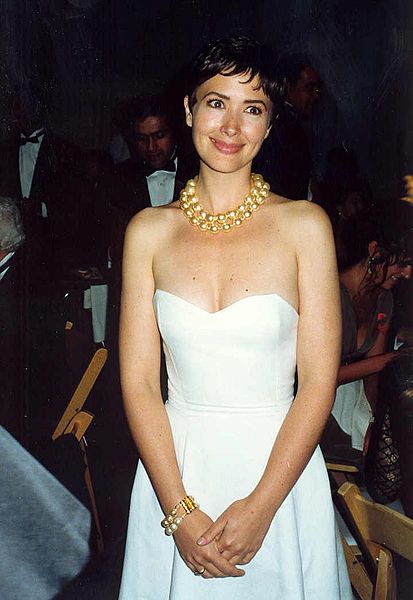 Janine Turner (born Janine Loraine Gauntt; December 6, 1962) is an American actress best known for her roles as Maggie O'Connell in the television series Northern Exposure, as Jessie Deighan in the feature film Cliffhanger, and as Katie McCoy in Friday Night Lights. She is an author, public speaker and founder and co-chair of Constituting America 2010.[1]

Turner was born Janine Loraine Gauntt in Lincoln, Nebraska, the daughter of Janice Loraine (née Agee), and Turner Maurice Gauntt, Jr.[2][3] She grew up in Euless and Fort Worth, Texas.[4]
Read more...

In 1978, the 15-year-old Turner left home to pursue a modeling career with the Wilhelmina Modeling Agency in New York City. She began her acting career in 1980 in Hollywood, appearing in several episodes of Dallas. She continued to make guest appearances on television shows throughout the 1980s before landing the role of Laura Templeton on General Hospital.

By 1986, Turner had become frustrated by the quality of the roles she was getting; as she told the Chicago Tribune five years later, "I was always working, but I wanted to do more serious roles and knew that I had the talent. I had to get away from Hollywood." Disregarding her agent's advice, Turner moved to New York in order to hone her craft, studying in Manhattan with Marcia Haufrecht of the Actors Studio.

I gained a new respect and appreciation for acting in New York. And I decided that I didn't want to lock myself into roles that portrayed women negatively. I turned a lot of (TV and film) opportunities down because of that. Everyone thought I was crazy. I was really going for broke. I only had eight dollars left and had become very depressed right before I got the part in Northern Exposure.[5]

Cast as Maggie O'Connell in 1990, Turner's work on Northern Exposure would earn her an Emmy nomination in 1993 and consecutive Golden Globe nominations from 1992 to 1994.[6] Accolades aside, the role itself was a positive experience for Turner, following the "damsel in distress" roles that had all but driven her from Hollywood in the first place. "I've found my ideal character in Maggie," she told the Tribune. "She's smarter and stronger than all the men she meets." Turner's own move from Hollywood to New York was mirrored by Maggie's, from her affluent Grosse Pointe community to the remote fictional backwater of Cicely, Alaska. Turner said about Maggie that "She went against the grain and challenged herself by moving to Alaska."[5]

After her breakthrough in Northern Exposure, Turner appeared in the action film Cliffhanger opposite Sylvester Stallone. She next appeared as June Cleaver in a Leave It to Beaver film adaptation of television's original Leave it to Beaver, then in Stolen Women: Captured Hearts, and Dr. T & the Women with Richard Gere. She also appeared in No Regrets and numerous movies of the week.

In 2004, Turner wrote, produced, and directed the award-winning Trip in a Summer Dress, a film about a strong-willed mother and her children. In 2006, she appeared in a low-budget movie filmed in Dallas, The Night of the White Pants, with Tom Wilkinson. In 2007, she co-wrote, co-produced, and starred in Christoga, a Christian Yoga DVD,[7] Turner also co-wrote and produced an album, Mockingbird Hill, in which both she and her daughter Juliette sang.

In 2015, Turner portrayed the wife of Anthony Hopkins' character in Solace.

In 2010 Turner founded and currently co-chairs the organization Constituting America[1] with Cathy Gillespie, aimed at educating American adults and students about the non-partisan relevancy of the U.S. Constitution.

On May 21, 2011, Turner began hosting a live two-hour talk show, The Janine Turner Show, on conservative-oriented talk radio station KLIF (AM) in Dallas, and in Houston, KTRC, followed by iHeart Radio until 2013. It was awarded "Best Radio Show in Dallas."[7]

In 2006, Turner was appointed a member of the President's Council on Service and Civic Participation.[8] She expressed her concern for what she perceived as a decidedly liberal bias in the media as a guest on the Fox News Channel show Huckabee on October 25, 2008, and on the CNN show Larry King Live on October 28, 2008. Turner is a frequent contributor to Republican Party candidates and organizations, donating at least $7,000 over the past decade.[9]

In 2010, Turner launched her public speaking career on the national circuit, and became a sought-after public inspirational speaker on a plethora of topics, including heart health, sobriety, faith, the Constitution,[1] and politics. She speaks at corporate events, civic events, schools, universities, and churches. Turner also spoke at the 2012 Republican National Convention.

Turner has described herself as "socially liberal and fiscally conservative. I'm almost more libertarian."[10] She debated a Democrat on The O'Reilly Factor every Friday from 2011–2012, and is now a regular on Varney & Co. on Fox Business. Turner has written 85 essays on the 85 Federalist Papers,[1] and many op-ed pieces for the Washington Examiner, The Washington Times, and FoxNews.com.[11] Turner has written a petition, "The Truth Act"[12] - and corresponding white paper, "Long and Little Known: How Incoherent Statutes Harm Liberty & the Rule of Law."

In September 2017, Turner was involved in handing out information about the Constitution at a middle school presentation in Southlake, Texas, that included information about lawmakers' attempts to insert a rider about abortion into a bill about sex-trafficking. Her group advocates making bills simpler and easier to understand, and the point in discussing the sex traffic bill was to demonstrate how bill complexity can frustrate the primary purpose of the bill: the anti-sex trafficking bill had wide support but passage was delayed when Democrats discovered language which would limit abortion funding.[13]

Turner has never married. Her daughter, Juliette Turner-Jones, was born in 1997. Juliette legally hyphenated her daughter’s surname in 2006 to include the name of her father, Jerry Jones Jr., son of the Dallas Cowboys' owner.[14] Janine Turner was once engaged to Alec Baldwin and also dated Troy Aikman, Mikhail Baryshnikov, and Sylvester Stallone.[15][16] As of 2014, Turner was living on a longhorn cattle ranch outside Dallas with her daughter.[17]

Janine Turner at the Governor's Ball after the 1992 Emmy Awards

Report a problem
Write to Janine Turner at FanPal • 2023