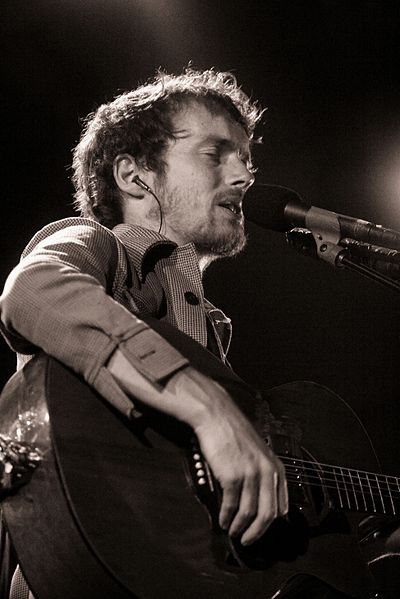 Damien Rice (born 7 December 1973) is an Irish singer-songwriter, musician and record producer. Rice began his musical career as a member of the 1990s rock group Juniper, which were signed to Polygram Records in 1997. The band enjoyed moderate success with a couple of single releases, but a projected album floundered because of record company politics. After leaving the band he worked as a farmer in Tuscany and busked throughout Europe before returning to Ireland in 2001 and beginning a solo musical career, and the rest of the band went on to become Bell X1. In 2002 his debut album O reached No. 8 on the UK albums chart, won the Shortlist Music Prize and generated three top-30 singles in the UK. Rice released his second album 9 in 2006 and his songs have appeared in numerous films and television episodes. After eight years of various collaborations, Rice released his third studio album My Favourite Faded Fantasy on 31 October 2014.[1] Rice's personal activities include musical contributions to charitable projects such as the Songs for Tibet, Freedom Campaign and the Enough Project.

Rice was born in Dublin to George and Maureen Rice, and raised in Celbridge, Ireland.[2] Rice formed the rock band Juniper along with Paul Noonan, Dominic Philips, David Geraghty and Brian Crosby in 1991. The band met whilst they were attending Salesian College secondary school in Celbridge, Co. Kildare as students. After touring throughout Ireland, the band released their debut EP Manna in 1995.[3]

Based in Straffan, Kildare, the band continued touring and signed a six album record deal with Polygram. Their recording projects generated the singles "Weatherman" and "The World Is Dead" which received favourable reviews.[3] They also recorded but never released "Tongue". After achieving his musical goals with Juniper, Rice became frustrated with the artistic compromises required by the record label, and he left the band in 1998.[4] Rice moved to Tuscany in Italy and took up farming for some time, then returned to Ireland before busking around Europe.[4] After returning to Ireland a second time, Rice gave a demo recording to his second cousin, music producer David Arnold who then gave Rice a mobile studio.[5][6]

Rice at the Coachella Valley Music and Arts Festival in 2007

In 2006 Rice released his second album 9 which was recorded during the two years prior.[10] 2007 was a year of touring with Rice appearing at England's Glastonbury Festival and the Rock Werchter festival in Belgium.[11] In 2008 he contributed the song "Making Noise" for the album Songs for Tibet: The Art of Peace in support of the 14th Dalai Lama and Tibet.[12]

In 2010, he contributed the song "Lonely Soldier" to the Enough Project[13] and played at the Iceland Inspires concert held in Hljómskálagarðurinn near Reykjavík centrum.[14] Records released in the UK, Europe and other countries are published by 14th Floor Records via Warner Music.[15] In spring 2011, Rice featured on the debut album by French actress and singer Melanie Laurent. He appears on two tracks on her debut album En t'attendant while collaborating on a total of five tracks which feature on the album.[16] In May 2013, Rice told the audience at the South Korea Seoul Jazz Festival 2013 that he is working on a new album.[17]

On 4 September 2014, Rice's official Twitter account announced his third album My Favourite Faded Fantasy, due to be released 31 October. On the Damien Rice official website the date given for the official release was 3 November 2014.[18] The album, My Favourite Faded Fantasy featuring the first single "I Don't Want To Change You" was released worldwide 10 November 2014 to critical acclaim from NPR’s Robin Hilton stating "The upcoming Damien Rice album is incredible..." and the London Evening Standard said "Damien Rice…is returning with one of the albums of the year."

Rice participated in the Freedom Campaign, the Burma Campaign UK and the U.S. Campaign for Burma to free Burmese democracy movement leader Aung San Suu Kyi.[19] He campaigned for her release by writing and performing the song "Unplayed Piano" at the 2006 Nobel Peace Prize Concert in Oslo. Damien lived in Carlisle, England for many years before advancing on with his music career where he moved abroad. [20]

Report a problem
Write to Damien Rice at FanPal • 2023