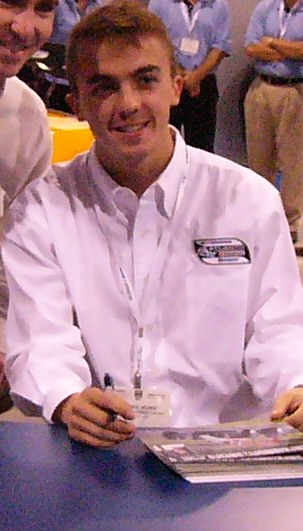 Francisco Muniz IV (born December 5, 1985)[1] is an American actor. He is best known for playing the title character in the Fox television family sitcom Malcolm in the Middle, which earned him an Emmy Award nomination and two Golden Globe Award nominations.

In 2003, he was considered "one of Hollywood's most bankable teens."[2] In 2008, he put his acting career on hold to pursue an open wheel racing career. He competed in the Atlantic Championship. From 2012 to 2014, he was a drummer in the band Kingsfoil.

Muniz was born on December 5, 1985, in Wood-Ridge, New Jersey.[3] His father, Francisco III, was a restaurateur, and his mother, Denise, was a nurse.[4] His father is Puerto Rican and his mother is of Italian and Irish descent.[5] He has an elder sister, Cristina.[5] When Muniz was four years old, his family moved to Knightdale, North Carolina, where he grew up.[6] He was first discovered at the age of eight, at a talent show in Raleigh, North Carolina, in a local production of A Christmas Carol, cast as Tiny Tim. Shortly after, his parents divorced, and he subsequently moved to Burbank, California, with his mother. Beginning in the sixth grade, Muniz was home-schooled by his mother.[2][7] He appeared in commercials and made his film debut in the made-for-television movie To Dance With Olivia (1997), starring Lou Gossett Jr. In that same year, he appeared in the CBS Hallmark Hall of Fame presentation of What the Deaf Man Heard. A small role in the film Lost & Found (1999) led to his breakout role as the title character on Malcolm in the Middle.
Read more...

Fox premiered Linwood Boomer's Malcolm in the Middle, starring Muniz, on January 9, 2000, as a mid-season replacement, and the show was quickly met with accolades. The premiere episode was watched by 23 million people[8] and the second episode by 26 million.[9] He was nominated for an Emmy Award[10] in 2001,[11] and received The Hollywood Reporter "Young Star Award" for his work in the series.

Throughout his television career, Muniz made guest appearances on the shows Lizzie McGuire; Sabrina, the Teenage Witch; and MADtv. His first starring role in a feature film was as Willie Morris in the 2000 family period piece My Dog Skip, which was released at the same approximate time as the pilot for Malcolm in the Middle. That same year, he provided the character voice of Domino in the 2000 video game 102 Dalmatians: Puppies to the Rescue, and was featured on the video game Stargate Worlds.

The following year, he contributed a character voice to the animal cast of the film Dr. Dolittle 2. He had a hit with the 2002 release Big Fat Liar, which teamed him with teen actress Amanda Bynes as a pair of students seeking revenge on a sleazy movie producer (played by Paul Giamatti). Muniz was also part of the ensemble for the gang film Deuces Wild, released that same year. In 2003, he made a cameo appearance as Cher's underage boyfriend in Stuck on You. That same year, he appeared in the series premiere of Ashton Kutcher's MTV practical joke series Punk'd.

Muniz subsequently played the title role in the film Agent Cody Banks as well as its sequel, Agent Cody Banks 2: Destination London. The first film opened in March 2003, and grossed $47 million; the sequel, which opened a year later, grossed $28 million.[12] He trained in martial arts for the films, and performed most of his own stunts. He also commented that it was the point in his career where he should "make the transition from child actor to an adult actor or a respectable actor."[13]

Muniz provided the character voice of a zebra named Stripes, who wishes to become a racing equine, in the 2005 film Racing Stripes. That same year, he made a guest appearance as himself in "Mr. F," an episode of the Fox comedy Arrested Development. In April 2006, he began filming My Sexiest Year, an independent film in which Harvey Keitel played his father.[14] He announced, during that same month, that he would be taking a break from acting, in order to pursue a career in race car driving, under a full-time two-year deal with Jensen Motorsport in the Formula BMW competition.[15][16]

Malcolm in the Middle finished its run on May 14, 2006. Ten days later, on May 24, Muniz appeared in the horror movie Stay Alive. He expressed a desire to leave traditional Hollywood film roles behind, saying:

Growing up has never scared me until last year. I started thinking about getting older, being an adult, and it scared me. Hopefully things will work out in my career. If they don't, then it was never meant to be.[17]

Despite his earlier stated intention to take a break from acting, in May 2006, he signed on to star in the R-rated teen-sex comedy Extreme Movie.[18] The film was originally planned to be released in 2007 by Dimension Films,[19] but was ultimately released straight to DVD in February 2009.

In late 2007, he made a guest appearance in an episode of the CBS crime drama Criminal Minds. In December 2007, he made a cameo appearance in the movie Walk Hard: The Dewey Cox Story, playing Buddy Holly. In 2008, he began work on a film with former Missy Elliott protégée Brianna Perry, but the project was never released.[20]

Muniz made a foray into the superhero genre with the family action film Pizza Man, in 2011.[21]

In 2012, he made a cameo appearance as himself in the second season of the comedy Don't Trust the B---- in Apartment 23.

In 2015, he made another cameo appearance in The Mysteries of Laura, in which one of the detectives (Merideth Bose) had a crush on the actor/ racecar driver (Frankie Muniz) who was competing in a drag race. The team was on an NYPD case and suspected evidence would present itself at the drag race.[citation needed]

On September 6, 2017, Muniz was announced as one of the celebrities who would compete on the 25th season of Dancing with the Stars. He was paired with professional dancer, Witney Carson.[22] Muniz and Carson finished the season in third place.

On August 1, 2018, it was announced Muniz would be the co-host of Dancing with the Stars Juniors on ABC, co-hosting with Jordan Fisher who was Season 25's Mirrorball Trophy winner.[23]

Muniz has had a long-running interest in car racing. On February 18, 2001, Muniz drove the pace car for the Daytona 500 and met Dale Earnhardt shortly before Earnhardt entered his vehicle for the race.[24] Muniz, who was also attending the race to film for MTV's documentary series True Life, witnessed the subsequent crash on the final lap which killed Earnhardt.[25]

Muniz's career in car racing traces back to 2004, when he ran the Toyota Pro/Celebrity Race in Long Beach as a celebrity participant, finishing 7th.[26] The following year, he finished third,[27] and was the best-finishing celebrity after capitalizing on Ingo Rademacher and Aaron Peirsol's contact on the final lap.[28] While investigating the possibility of joining a racing team as an owner, he was granted a test in a car, and instead signed a two-year deal with Jensen Motorsport as a driver. Muniz entered fourteen races during the 2006 Formula BMW USA season, and failed to finish in a point-scoring position.[citation needed] He was selected as one of the thirty-six drivers to compete in the annual Formula BMW World Final at Valencia. Muniz finished 29th.[29][30] In April, he again competed in the Toyota Pro/Celebrity, finishing 11th after starting 19th.[31]

In 2007, Muniz moved up to the more competitive Champ Car Atlantic Series,[32] where he competed in the entire season of 12 races. For the season, his best race finish was ninth place, and he officially earned a total of 41 points (for 22nd place) and $17,000 in prize money, logging 351 laps.[33] In January 2007, he placed second at the Sebring Winter National race.[34] He signed with Atlantic Championship-winning team Pacific Coast Motorsports in January 2008, with a goal to consistently compete in the top ten of the points championship. He finished the 2008 season in eleventh place. At the end of the 2008 season, he won the Jovy Marcelo Award, an award for sportsmanship voted on by fellow drivers named in memory of the 1991 Atlantic Championship winner who was killed during practice for the 1992 Indianapolis 500. In 2009, Muniz joined Team Stargate Worlds, and finished in the top ten in every race he contested, with a best finish of fourth at Miller Motorsports Park. However, prior to the penultimate race at Road America, his season was shortened by wrist surgery.[35]

Muniz at the Toyota Pro/Celebrity Race in 2011

Muniz joined the unsigned band You Hang Up as a drummer. He said, "This is something I have always wanted in my life, and I'm thrilled to be associated with such a great group of guys!"[37]

In 2012, Muniz joined Kingsfoil, a band based in York, Pennsylvania, and endorsed SJC Drums and Imperial Cymbals.[38] In 2014, he had to leave the band because of scheduling problems.

In 2017, Muniz announced on Facebook that he is the manager for the York-based band Astro Lasso, which consists of Jordan Davis and Tristan Martin of his former band Kingsfoil. Muniz travels with the band doing their monitor systems, lights, as well as being the designated driver.[39] The band opened for We The Kings, Cute Is What We Aim For and Plaid Brixx on the We The Kings 10 tour this past spring.[40]

On November 30, 2012, at age 26, Muniz was hospitalized after having a transient ischemic attack, also described as a "mini stroke", and spoke about the experience on Katie.[45][46] He suffered a second attack a year later, on 25 November 2013.[47] He was interviewed in 2017 and asked about his health, and said he has had no issues.[48] It was revealed on Dancing with the Stars on October 9, 2017, that he in fact has suffered from a lot of memory loss, including losing memories from his childhood acting days.[49]