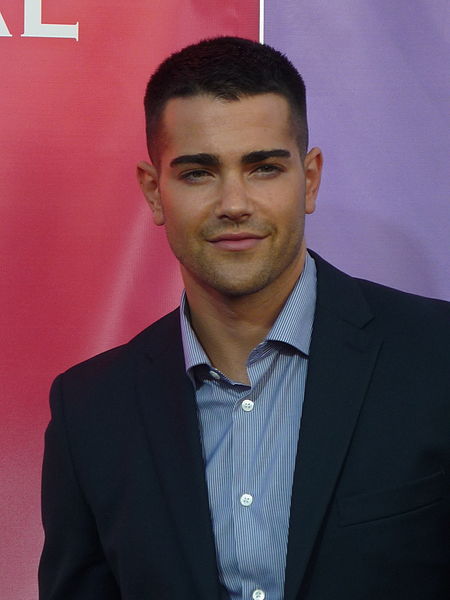 Jesse Eden Metcalfe (born December 9, 1978) is an American actor and musician. Metcalfe is known for his portrayal of John Rowland on Desperate Housewives. Metcalfe has also had notable roles on Passions and played the lead in John Tucker Must Die. He starred as Christopher Ewing in the TNT continuation of Dallas, based on the 1978 series of the same name. He currently stars as Trace Riley in Hallmark Channel's series Chesapeake Shores.

Metcalfe was born in Carmel Valley Village, California,[2] the son of Nancy (née DeMaio) and Jeff Metcalfe. His father is of English, Irish, French, and Italian descent and his mother is of Italian and Portuguese ancestry.[3][4][5][6] Metcalfe played in several basketball leagues during his teen years in Waterford, Connecticut, and graduated from The Williams School in New London, Connecticut. He dropped out of NYU once he booked the part Miguel Lopez-Fitzgerald on the soap opera Passions.
Read more...

Metcalfe played the role of Miguel Lopez-Fitzgerald on the NBC soap opera Passions from the show's debut in July 1999.[7][8] It was announced in March 2004 that he would not be renewing his contract with the series, and his final airdate was in July 2004.[9]

In October 2004, Metcalfe starred in the ABC comedy-drama series Desperate Housewives as teen gardener John Rowland, who is involved in an affair with married housewife Gabrielle Solis (Eva Longoria).[10] In 2005, Metcalfe won the "Choice TV Breakout Performance: Male" award at the Teen Choice Awards for his role on the show. For a brief period Metcalfe juggled both Passions and Desperate Housewives roles before leaving Passions to focus on Desperate Housewives full-time. Following the first season, creator Marc Cherry revealed Metcalfe would return to the series on a recurring basis. Metcalfe made his final appearance as a special guest star on the show in October 2009.

In July 2006, Metcalfe played the titular character in the 20th Century Fox comedy film John Tucker Must Die. The film, which starred Sophia Bush, Brittany Snow, and R&B singer Ashanti, followed three friends who set out to break the heart of a serial cheater by setting him up with the new girl in town. Filming took place in Vancouver on a budget of $18 million. The film and Metcalfe's performance received mixed reviews and went on to make over $68,824,526 worldwide. To promote the film, Metcalfe hosted an episode of the British TV chat show The Paul O'Grady Show in October, due to O'Grady's being unwell.

In July 2008, Metcalfe starred in the horror film Insanitarium portraying the protagonist, Jack. The film, which centers on a young man trying to break his sister out of a mental institution, was filmed in August and September 2007. The film received negative reviews though Metcalfe's performance received positive reviews from the few critics who reviewed the film. That same year Metcalfe starred in The Other End of the Line as the romantic interest Granger Woodruff. The film was released in October and went on to make over $507,534 worldwide on a limited theatrical release in selected countries.

In February 2008, Variety announced Metcalfe would star alongside Michael Douglas and Amber Tamblyn in the remake of the 1956 film Beyond a Reasonable Doubt. Filming took place in Los Angeles the following month. The film suffered distribution problems and suffered numerous push-backs. The film was released in September 2009 to universally negative reviews. The film, which made over $3 million worldwide, failed to surpass its $25 million budget.

In February 2010, Metcalfe was cast in the NBC crime drama series Chase.[11] The pilot was shot in March that same year in Houston, Texas.[12] On May 10, 2010, NBC picked up an eighteen-episode first season.[13] The series centers on a fugitive-apprehension team based outside of Houston, Texas, who track down dangerous criminals. The series premiered on September 20, 2010, to 7.31 million viewers and mixed reviews from critics. The series did not return for a second season due to low ratings. In September 2010, Metcalfe starred as Noah McManus in Hallmark movie Fairfield Road alongside Natalie Lisinska.[14]

In February 2011, Metcalfe was confirmed to star in the TNT drama series Dallas.[15] The series is a continuation of the Dallas series that premiered in 1978 and went on for 14 seasons. In July 2011, TNT picked up the pilot and ordered a ten-episode first season.[16] Both Jordana Brewster and Josh Henderson were confirmed to star. Metcalfe portrayed Christopher Ewing, a role that originated in the original series in which it was played by various child actors. The series premiered on June 13, 2012, to 6.86 million viewers and generally favorable reviews from critics.[17] Dallas was canceled on October 3, 2014, after three seasons.[18]

In 2015, Metcalfe had a lead role as Chase Carter in the movie Dead Rising: Watchtower based on Capcom's videogame franchise.[19] Metcalfe also starred as Bradley Suttons in Hallmark movie A Country Wedding.[20] The film premiered to 2.2 million total viewers on Hallmark movie channel.[21] In 2016, Metcalfe starred in the Christian drama film God's Not Dead 2, as Tom Endler, a lawyer who defends a Christian teacher who struggles between giving up her faith or giving up her job.[22]

On June 20, 2016, Metcalfe reprises his role as investigative reporter Chase Carter in the sequel Dead Rising: Endgame.[23] Metcalfe currently stars as Trace Riley in Hallmark Channel's series Chesapeake Shores alongside Meghan Ory. The show premiered August 14, 2016.[24] In addition to playing the character Trace, Metcalfe performs and composes some of the songs used in the series' episodes.[25] He played the role of officer Holder and Dylan Holder in the drama film Destined.[26]

In 2017, Metcalfe starred as Eric Redford in the Hallmark movie Christmas Next Door.[27] In 2018, Metcalfe played the role of Luke in the action thriller Escape Plan 2: Hades.[28] He also starred as Brady in the horror thriller film The Ninth Passenger.[29]

In March 2007, Metcalfe entered a drug rehabilitation facility, citing alcoholism as the reason.[30]

In November 2008, Metcalfe hosted the World Music Awards in Monaco. While at the after party for the ceremony, Metcalfe fell off a second-story balcony and tumbled thirty feet to the ground. He fractured his fibula but avoided more serious injury.[31]

Report a problem
Write to Jesse Metcalfe at FanPal • 2023