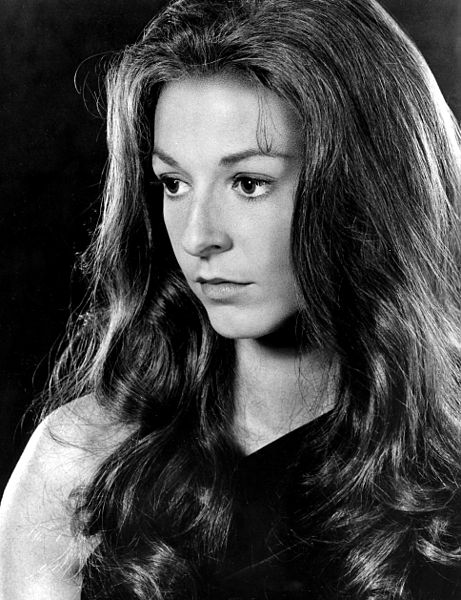 Jane Alexander (born October 28, 1939) is an American author, actress, and former director of the National Endowment for the Arts. She is a Tony Award winner and two-time Emmy Award winner.

Alexander made her Broadway debut in 1968 in The Great White Hope and won the 1969 Tony Award for Best Featured Actress in a Play. Other Broadway credits include, 6 Rms Riv Vu (1972), The Night of the Iguana (1988), The Sisters Rosensweig (1993) and Honour (1998). She has received a total of seven Tony Award nominations and was inducted into the American Theater Hall of Fame in 1994.[1]

She went on to star in the film version of The Great White Hope in 1970 and received the first of four Academy Award nominations for her performance. Her subsequent Oscar nominations were for All the President's Men (1976), Kramer vs. Kramer (1979), and Testament (1983). An eight-time Emmy nominee, she received her first nomination for playing Eleanor Roosevelt in Eleanor and Franklin (1976), a role that required her to age from 18 to 60. She has won two Emmys for Outstanding Supporting Actress in a Miniseries or Movie for Playing for Time (1980) and Warm Springs (2005).

Alexander was born Jane Quigley in Boston, Massachusetts, daughter of Ruth Elizabeth (née Pearson), a nurse, and Thomas B. Quigley, an orthopedic surgeon.[2] She graduated from Beaver Country Day School, an all-girls school in Chestnut Hill outside of Boston, where she discovered her love of acting.[3]

Encouraged by her father to go to college before embarking on an acting career, Alexander attended Sarah Lawrence College in Bronxville, New York, where she concentrated on theater, but also studied mathematics with an eye toward computer programming, in the event that she failed as an actress. Also while at Sarah Lawrence, she shared an apartment with Hope Cooke, who would become Queen Consort of Sikkim. Alexander spent her junior year studying at the University of Edinburgh in Scotland, where she participated in the Edinburgh University Dramatic Society. The experience solidified her determination to continue acting.[3]

Alexander's major break in acting came in 1967 when she played Eleanor Backman in the original production of Howard Sackler's The Great White Hope at Arena Stage in Washington, DC. Like her co-star, James Earl Jones, she went on to play the part both on Broadway (1968), winning a Tony Award for her performance, and in the film version (1970), which earned her an Oscar nomination.[4] Alexander's additional screen credits include All the President's Men (1976), Kramer vs. Kramer (1979), and Testament (1983), all of which earned her Oscar nods, Brubaker (1980), The Cider House Rules (1999), and Fur (2006), in which she played Gertrude Nemerov, mother of Diane Arbus, played in the film by Nicole Kidman.

Alexander co-starred with Rachel Roberts in Steven Gether's teleplay and production of A Circle of Children (1977), based on Mary MacCracken's autobiographical book about emotionally disturbed children (with an emphasis on autism), which won Gether an Emmy. Alexander also starred in its sequel, Lovey: A Circle of Children, Part II (1978).

In 1979, the Supersisters trading card set was produced and distributed; one of the cards featured Alexander's name and picture.[7]

Alexander's other television films include Arthur Miller's Playing for Time, co-starring Vanessa Redgrave, for which Alexander won another Emmy Award; Malice in Wonderland (as famed gossip-monger Hedda Hopper); Blood & Orchids; and In Love and War (1987) co-starring James Woods, which tells the story of James and Sybil Stockdale during Stockdale's eight years as a US Navy Commander and prisoner of war in Vietnam. Alexander also played the protagonist, Dr. May Foster, in the HBO drama series Tell Me You Love Me. Her character, a psychotherapist, serves as the connecting link between three couples coping with relational and sexual difficulties. The show's frank portrayal of "senior" sexuality and explicit sex scenes generated controversy, although it won a rare endorsement by the AARP. She also had a minor role as Dr. Graznik in The Ring.

In 1993, President Bill Clinton appointed Alexander chairperson of the National Endowment for the Arts, the organization that had provided partial funding for The Great White Hope at Arena Stage. Alexander moved to Washington, DC, and served as chair of the NEA until 1997. Her book, Command Performance: an Actress in the Theater of Politics (2000), describes the challenges she faced heading the NEA at a time when the 104th U.S. Congress, headed by Newt Gingrich, unsuccessfully strove to shut it down.[3] She was elected a fellow of the American Academy of Arts and Sciences in 1999.[8]

In 2004, Alexander, together with her husband, Edwin Sherin, joined the theater faculty at Florida State University.[9] She serves on various boards, including the Wildlife Conservation Society, the National Audubon Society,[10] Project Greenhope, the National Stroke Association, and Women's Action for Nuclear Disarmament, and she has received the Israel Cultural Award and the Helen Caldicott Leadership Award. Alexander is also a fellow of the International Leadership Forum.[11] In 2009 Alexander starred in Thom Thomas's play A Moon to Dance By at The Pittsburgh Playhouse and at The George Street Playhouse in New Brunswick, N.J. It was directed by her husband, Edwin Sherin.

In 2016, Alexander voiced a role in the play New York Story by Mike Reiss, for Playing On Air, a nonprofit organization that "records short plays written by top playwrights and performed by outstanding actors."[12][13]

Alexander met her first husband, Robert Alexander, in the early 1960s in New York City, where both were pursuing acting careers. They had one son, Jace Alexander, in 1964, and the couple divorced a decade later. Alexander had been acting regularly in various regional theaters when she met producer/director Edwin Sherin in Washington, DC, where he was artistic director at Arena Stage. Alexander starred in the original theatrical production of The Great White Hope under Sherin's direction at Arena Stage prior to the play's Broadway debut. The two became good friends and, once divorced from their respective spouses,[citation needed] became romantically involved, marrying in 1975. Between the two, they have four children, Alexander's son Jace and Sherin's three sons, Tony, Geoffrey, and Jon.[3]