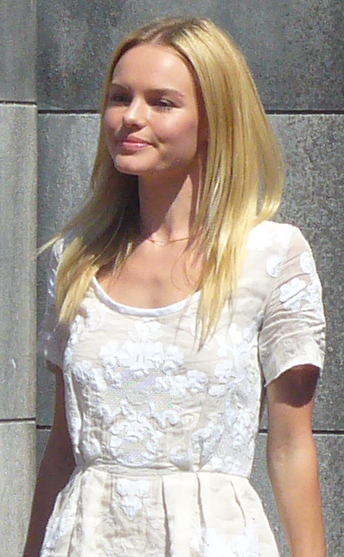 Catherine Ann Bosworth (born January 2, 1983)[1] is an American actress and model. Following minor roles in the films The Horse Whisperer (1998) and Remember the Titans (2000), she rose to prominence with her role as a teenage surfer in the box-office hit Blue Crush (2002).

Bosworth was born in Los Angeles, California.[2] She is the only child of Patricia (née Potter), a homemaker, and Harold Bosworth, a former executive for Talbots.[3][4] She was born with heterochromia iridum, and has a hazel right eye and a blue left eye.[5] At the age of six, Bosworth's family relocated from San Francisco to various parts of the country due to her father's job. She was raised mainly on the East Coast, spending the rest of her youth in Massachusetts and Connecticut.[3]

Bosworth developed an interest in competitive horse racing, and by the age of fourteen, she was a champion equestrian.[3][6] She graduated from Cohasset High School, in Cohasset, Massachusetts, in 2001.[7][8]

Bosworth's first film role came after an open casting call in New York for the supporting part of Judith in the 1998 film, The Horse Whisperer. The film's producers needed someone who was already an experienced horse rider, leading to Bosworth's successful audition for the role.[6] The film received positive reception from film critics.[9] In 2000, she starred in the television series drama Young Americans, in which she played Bella Banks.[10] The series, however, was canceled.[11] That same year, she had a small part in the film Remember the Titans.[10] In 2001, Bosworth moved to Los Angeles in hopes of obtaining easier access to auditions and better film parts.[3]

The breakthrough role in Bosworth's career came in the 2002 surfing movie Blue Crush, which she prepared for by working out with two separate trainers seven hours a day for months in order to add fifteen pounds of muscle to her frame.[12] In his review of the film, Rolling Stone's Peter Travers wrote: "Bosworth is a star in the making, but even she can't outshine the surfing footage, which is flat-out spectacular."[13] The film received positive reviews[14][15] and grossed $40 million at the United States box office.[16] Following the success of Blue Crush, Bosworth took on the lead role in low-budget Wonderland (2003) opposite Val Kilmer. Bosworth played the teenage girlfriend of porn star John Holmes.[10][17]

In 2004, she played the lead role in romantic comedy Win a Date with Tad Hamilton!, opposite Topher Grace.[18] The film was critically and financially unsuccessful.[19][20] Also in 2004, Bosworth depicted actress Sandra Dee in Beyond the Sea.[21] The movie received mixed reception,[22] and was a box office disappointment,[23] though Bosworth received critical acclaim for her performance.[24] The following year, Bosworth portrayed Chali, a Hare Krishna, in the film adaptation of Myla Goldberg's novel Bee Season (2005), about a dysfunctional Jewish family.[25] She has appeared in several Revlon ads and ranked as number 60 in FHM's "100 Sexiest Women in the World 2005" list.[26][27] For two years running, she has placed on the Maxim Hot 100 List - number 38 in 2005 and number 8 in 2006.[28][29]

Bosworth was cast as reporter Lois Lane in Bryan Singer's superhero film Superman Returns (2006).[30] She starred along with her Beyond the Sea co-star Kevin Spacey as Lex Luthor, as well as newcomer Brandon Routh as Superman.[31][32] The film was a box office success and received mostly positive reviews.[33] Bosworth's performance however, was not well received among critics; Anthony Lane of The New Yorker noted, "The new Lois Lane, Kate Bosworth, is not a patch on Margot Kidder, or, for that matter, on Teri Hatcher, in the TV series."[34] San Francisco Chronicle film critic Mick LaSalle felt that Bosworth, at the age of 22 years, was too young to portray Lois Lane, and the climax did not "match the potential of the tiring 154 minute long film".[35] Although Bosworth's performance was ambivalently received, she herself loved the experience of working on the movie. As she told Teen Vogue in August 2006, "You know how you have an experience, a time in your life when you feel you've come into your own? When you grow up a bit, and think, Now I get it? That's how I feel. I feel a little bit more complete."[36] The movie grossed $52 million during its opening weekend in North America and went on to earn $391 million worldwide.[37]

Bosworth starred as Louise in the psychological drama called The Girl in the Park with Sigourney Weaver, Alessandro Nivola and Keri Russell, written and directed by Pulitzer Prize winner David Auburn in his directorial debut.[38] The film premiered at the 2007 Toronto International Film Festival, it has since been picked up by The Weinstein Company.[39] Alissa Simon of Variety wrote that Bosworth "tries her best, but her character's too extremely drawn."[40] Bosworth also filmed 21, an adaptation of the book Bringing Down the House, in early 2007 in Boston, Massachusetts and Las Vegas, Nevada.[41][42] This film reunites her with co-star Kevin Spacey and director Robert Luketic.[41][42] 21 garnered mixed reviews, with Joanne Kaufman of the Wall Street Journal concluding, "Very little adds up in 21."[43]

In 2006, she optioned the film rights to Catherine Hanrahan's novel Lost Girls and Love Hotels and was set to produce the project alongside filmmaker Nadia Connors.[44] As of 2016, the project was at a standstill. In 2010, she starred in The Warrior's Way, which was shot in New Zealand alongside Korean actor Jang Dong-gun and Geoffrey Rush.[45][46] The film was one of 2010's biggest box office flops, grossing only slightly more than $11,000,000 worldwide, but costing $42 million. She has said about her roles, "I just don't do comfort zones."[47]

In 2011, Bosworth contracted to sing the television jingle for Cotton Incorporated's "Fabric of My Life" advertisement.[50] On December 4, 2012, Topshop revealed that Bosworth was the "secret" woman in the new Topshop Christmas Adverts.[51]

Bosworth released ten films between 2011 and 2014, moving away from the big-budget Superman franchise into lower-budget film roles like Still Alice with Julianne Moore. The short film Lov, which was filmed in Slovenia, featured Bosworth and launched fashion designer Vanessa Bruno’s Fall 2011 campaign.[55]

Bosworth was accepted to Princeton University in late 2000, but because of continual deferral of her attendance, her acceptance was later revoked.[64] She is a member of the Appalachia Service Project.[65]

In July 2011, Bosworth and her boyfriend, Swedish actor Alexander Skarsgard, parted ways after two years of dating. In mid-2011, Bosworth began dating American director Michael Polish, whom she had met earlier that year when he directed her in the film Big Sur.[69] Bosworth and Polish announced their engagement in August 2012,[70] and married on August 31, 2013 in Philipsburg, Montana.[71]

Bosworth is a fan of the Dallas Cowboys, as mentioned as part of her appearance on The Tonight Show Starring Jimmy Fallon in January 2015.

She is a member of Soka Gakkai International, an organization of Nichiren Buddhism and Mahayana Buddhism.[72]