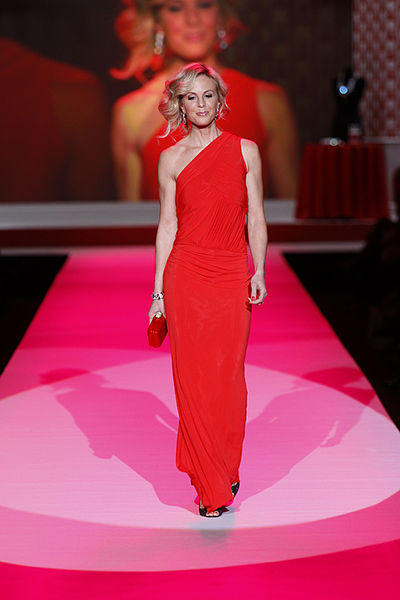 Elisabeth DelPadre Hasselbeck (née Filarski; born May 28, 1977) is a retired American television personality and talk show host. Hasselbeck was born and raised in Cranston, Rhode Island, she attended St. Mary Academy - Bay View as a teenager and graduated from Boston College in 1999. In January 2001, Hasselbeck rose to prominence as a contestant on the second season of the American version of Survivor, where she finished in fourth place. She married NFL quarterback Tim Hasselbeck in July 2002.

In November 2003, Hasselbeck replaced Lisa Ling as the fourth co-host on The View. With her co-hosts Joy Behar, Whoopi Goldberg, Sherri Shepherd, and Barbara Walters, she was awarded the Daytime Emmy Award for Outstanding Talk Show Host during the 36th Daytime Emmy Awards. After ten years on the show, Hasselbeck left the series in July 2013. She became the co-host of Fox & Friends that September. In November 2015, Hasselbeck announced she will retire and leave Fox & Friends in order to spend more time with her family; December 22, 2015 was her last day on the show before her retirement.

Elisabeth was born on May 28, 1977, in Cranston, Rhode Island.[2] She is the daughter of Catholic-school teacher and lawyer Elizabeth DelPadre and architect Kenneth Filarski.[3] Her brother, Kenneth, Jr., is a practicing attorney and aspiring musician. Their father is of Polish descent and their mother is of Italian ancestry.[4]

Hasselbeck was raised Roman Catholic and attended St. Mary School in Cranston, followed by St. Mary Academy - Bay View in East Providence, where she graduated in 1995.[3] She then attended Boston College, where she captained the women's softball team for two seasons, winning consecutive Big East championships. With a concentration on large scale paintings and industrial design, Hasselbeck graduated with a BFA in 1999.[5] Hasselbeck started working for Puma in 1998, while attending Boston College. After graduation, she worked for Puma shoes as a member of its design team before her television career.[5]

In 2001, Hasselbeck (then Elisabeth Filarksi) was cast in Survivor: The Australian Outback, and was originally a member of the Kucha tribe. She avoided being voted out at the first Tribal Council which her tribe attended. She then went on a winning streak but lost once again in episode five, where they voted out Kimmi. In episode six, Hasselbeck's tribemate Michael Skupin fell into the camp fire and had to be medically evacuated, therefore sending the Kucha and Ogakor tribes into the merge with five members each. When the merge came, she lasted almost nine hours in the first individual immunity challenge in which contestants had to stand on a perch in the water for as long as possible. When the first vote came, her tribemate Jeff was voted out due to previous votes cast against him. This led to another Kucha member Alicia being voted out and sent to the jury. Filarski was next on the block when the biggest threat in her original tribe, Nick, won immunity, but she swayed the votes of Ogakor members Tina Wesson and Colby Donaldson her way, and had Jerri Manthey voted out. At the final five, her closest ally throughout the entire game, Rodger Bingham, was voted out. She then became the sole remaining Kucha member and was voted out, coming in fourth overall. She was one of four votes for Tina to win. She was one of two people who were asked to return for Survivor: All Stars and declined, the other being Colleen Haskell of Survivor: Borneo.

Hasselbeck was a judge at the Miss Teen USA 2001 pageant.[6] From 2002 to 2003, she hosted the Style Network's The Look for Less where she helped find stylish clothes for bargain prices.[5]

Although Hasselbeck previously saw herself as a "behind the scenes" kind of person and not interested in career television, or playing pundit, her agent was eager to showcase her competitive client and she auditioned for The View in 2003.[7] Hasselbeck was one of a number of women who guest-hosted to replace outgoing The View co-host Lisa Ling, who left the show at the end of 2002. She became a permanent co-host on November 24, 2003.

Hasselbeck typically represented the conservative position on The View.[8]

On August 2, 2006, Hasselbeck got into a heated debate in which she strongly opposed the Food and Drug Administration's plan to sell the "morning-after pill" as an over-the-counter drug. Hasselbeck stated, "I believe that life begins at the moment of conception." She said the over-the-counter distribution of the pill should be banned even in cases of rape and incest, because "life still has value." Hasselbeck argued that advocates of the drug use the "rape or incest" exception as a "bait-and-switch" distraction from the goal of making it universally accessible. She argued that if the "rape or incest" exception were all advocates cared about, they would not support its over-the-counter status.[9]

On May 23, 2007, Hasselbeck was involved in a heated on-air argument with co-host Rosie O'Donnell concerning the war in Iraq, which she supported and O'Donnell opposed. When O'Donnell asked, "655,000 Iraqi civilians dead. Who are the terrorists?"[10] O'Donnell was criticized by conservative commentators (including Fox News anchor Bill O'Reilly) for her question and she (O'Donnell) complained about Hasselbeck's unwillingness to defend O'Donnell's statements in the controversy that followed. Hasselbeck responded "defend your own insinuations," adding that she should not have to defend anyone else's words for them, especially when that person has a forum in which to present a defense.[11]

On October 3, 2007, Hasselbeck and The View co-host Whoopi Goldberg were discussing Senator Hillary Clinton's proposal that the U.S. government provide a $5,000 savings bond for each child at birth. The conversation became heated when Hasselbeck stated it would lead to fewer abortions because women would want to keep the money.[12]

On March 8, 2013, there were widespread media reports that Hasselbeck was going to be fired from the show, effective at the end of the season, allegedly because of market research polling that showed viewers thought her views were too conservative.[14][15][16][17] However, on the March 11, 2013, episode of the show, Walters said that the rumors were "particularly false" and that there are "no plans for Elisabeth to leave this show".[18][19][20][21]

On September 16, 2013, Hasselbeck joined the Fox News morning show, Fox & Friends as a co-host, replacing Gretchen Carlson.[24][25] By that November, the show's ratings had grown by 9 percent, and increased 10 percent in viewership among people ages 25-54.[26] In November 2015, Hasselbeck announced that she would retire and leave Fox & Friends at the end of the year in order to spend more time with her family, saying she wanted to "give them the best of me, not the rest of me".[27] Her final day in Fox News was on December 22, 2015.[28]

Hasselbeck is a Christian,[32] and in August 2014, she condemned the persecution of Christians in Iraq, as well as the removal of Bibles from hotel rooms in the United States.[33]

Hasselbeck has said that she calls herself neither a conservative nor a liberal. Her parents were liberals.[34] She has stated that the term "conservative" does not define her as a person.[35] She was a keynote speaker at the Republican National Conventions in both 2004 and 2008.[36][37] On October 26, 2008, Hasselbeck appeared at Republican rallies in Florida, introducing vice presidential candidate Sarah Palin.[38] In August 2013, conservative Newsmax magazine named Hasselbeck among the "25 most influential women in the GOP".[39]

Hasselbeck is a supporter of breast cancer awareness initiatives in the form of an Internet-only PSA on breast cancer diagnosis.[40]

Hasselbeck is living with celiac disease.[41] She has written a book on the subject, The G-Free Diet: A Gluten-Free Survival Guide, which has appeared on several best-seller lists. On June 23, 2009, a lawsuit was filed in a federal court in Massachusetts alleging that her book was plagiarized from a self-published book by Susan Hasset.[42][self-published source] Hasselbeck released a statement calling the allegations baseless. The lawsuit was dismissed in November 2009 when the plaintiff's lawyer declined to pursue it, saying to the press that he believed some degree of plagiarism occurred, but it was not sufficient to justify monetary damages.[43][44][45]

In 2011, Hasselbeck introduced NoGii, her line of gluten-free nutritional products for children and adults.[46]

Report a problem
Write to Elisabeth Hasselbeck at FanPal • 2022