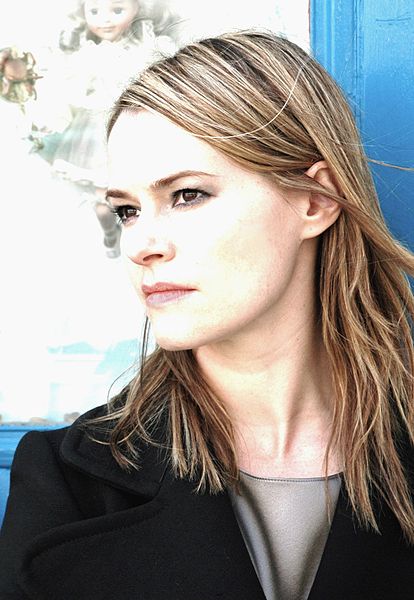 Leisha Hailey (born July 11, 1971) is an American actress and musician known for playing Alice Pieszecki in the Showtime Networks series The L Word. Hailey first came to the public's attention as a musician in the pop duo The Murmurs and has continued her music career as part of the band Uh Huh Her.

Born in the USCAR, Japan to American parents, Hailey grew up in Bellevue, Nebraska.[1][2][3]

At 17, she came out as a lesbian before moving to New York City to attend the American Academy of Dramatic Arts.[4]

With her Academy classmate Heather Grody, she formed the pop duo The Murmurs in 1991. In the 1990s, they released several albums and toured on the Lilith Fair.[citation needed] In 2001, Hailey and Grody changed their name to Gush. The group disbanded when Hailey was cast in The L Word. In 2005, Hailey founded Marfa Records.[5]

In July 2007, Uh Huh Her, an electropop duo consisting of Hailey and Camila Grey, released an EP entitled I See Red; over a year later they released their first album Common Reaction.

Hailey's television debut was in 1996 when she played a struggling musician on an episode of Boy Meets World.[6] Her first major film role was in the 1997 movie All Over Me.[7]

From 2004 to 2009, she starred as Alice Pieszecki, a journalist, television, and radio show host, on The L Word. At the beginning of the series, Hailey's character identified as bisexual. By the end of the series, specifically in season 5, her character dated mostly women.[8]

In September 2008, Showtime announced Hailey would star in The Farm,[9] a "pilot presentation spinoff" of The L Word, to be written and produced by Ilene Chaiken, creator and executive producer of The L Word.[10] It was announced in April 2009 that the show would not be picked up by Showtime.[11][12]

Hailey has appeared in several Yoplait yogurt commercials[13] as well as a BMW commercial.[14] In April 2008, Hailey was named spokesperson for Olivia Cruises, a travel company which sells cruises and resort vacations marketed towards lesbian customers.[15] She also stars in the psychological thriller Fertile Ground.[16]

In 2015, Hailey appeared in an episode[17] of long-running The CW show Supernatural as Amelia Novak, the estranged wife of Jimmy Novak (human vessel of the angel Castiel, played by Misha Collins.)

In 2007, Hailey was named the sexiest woman in the AfterEllen Hot 100 list compiled by AfterEllen.com.[18]

Hailey dated k.d. lang for nearly 5 years until breaking up in 2001.[4] She also had a long-term relationship with Nina Garduno from 2004 to 2010. From 2011 to 2016, she was dating her bandmate Camila Grey. Their relationship first became public when the two were ejected from a Southwest Airlines flight for arguing with a flight attendant who asked them to stop kissing.[19]

Report a problem
Write to Leisha Hailey at FanPal • 2022