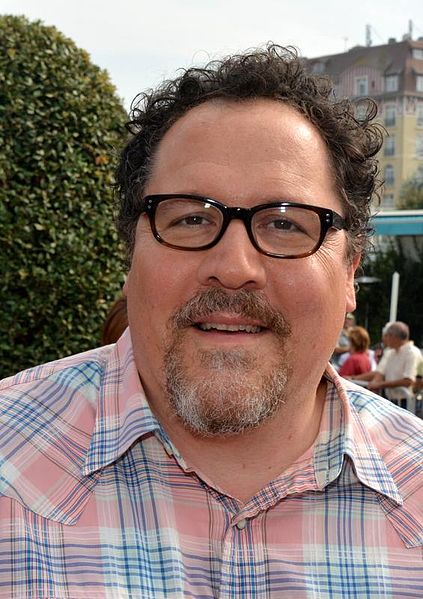 Favreau was born in Flushing, Queens, New York, the son of Madeleine, an elementary school teacher who died of leukemia in 1979, and Charles Favreau, a special education teacher.[2] His mother was Jewish (of Russian-Jewish descent),[3][4][5] and his father is a Catholic of Italian and French-Canadian ancestry.[6][7][8] Favreau attended Hebrew school and had a Bar Mitzvah ceremony.[9]

Favreau graduated from The Bronx High School of Science in 1984[10] and attended Queens College from 1984 to 1987,[11] before dropping out. His friend from college, Mitchell Pollack, said that Favreau went by the nickname "Johnny Hack" because of his talent in the game Hacky Sack.[12] He briefly worked for Bear Stearns on Wall Street before returning to Queens College for a semester in early 1988. He dropped out of college for good (a few credits shy of completing his degree),[11] and in the summer of 1988, moved to Chicago to pursue a career in comedy.[13] He performed at several Chicago improvisational theaters, including the ImprovOlympic and the Improv Institute.[14]

While in Chicago, Favreau landed his first film role alongside Sean Astin as football tutor D-Bob in the sleeper hit Rudy (1993).[15] Favreau met Vince Vaughn - who played a small role in this film - during shooting. The next year, he appeared in the college film PCU alongside Jeremy Piven, in the 1994 episode of Seinfeld titled "The Fire" he appeared as Eric the Clown.[16][17] He then moved to Los Angeles, where he made his breakthrough in 1996 as an actor-screenwriter with the film Swingers, which was also Vaughn's breakthrough role as the character Trent Walker, a foil to Favreau's heartbroken Mike Peters.[18] In 1997, he appeared on the television sitcom Friends, portraying Pete Becker - Monica Geller's millionaire boyfriend who competes in the Ultimate Fighting Championship (UFC) - for several episodes.[19] Favreau made appearances in the sketch-comedy series, Tracey Takes On... in both 1996 and 1997.[20]

He rejoined Piven in 1998 as part of Very Bad Things (1998).[21] In 1999, he starred in the television film Rocky Marciano, based on the life of world heavyweight champion, Rocky Marciano.[22] He later appeared in Love & Sex (2000), co-starring Famke Janssen.[23] Favreau appeared in 2000's The Replacements as maniacal linebacker Daniel Bateman, and that same year he played himself in The Sopranos episode "D-Girl", as a Hollywood director who feigns interest in developing mob associate Christopher Moltisanti's screenplay in order to collect material for his own screenplay.[24][25]

He was a guest-director for an episode of the college dramedy Undeclared in 2001, and Favreau got some screen time as lawyer Foggy Nelson in the 2003 movie Daredevil (2003) (considerably more in the Director's Cut version).[26][27] He also starred in The Big Empty (2003), directed by Steve Anderson. His character was John Person, an out of work actor given a strange mission to deliver a blue suitcase to a man named Cowboy in the desert.[28]

In 2001, he made his film directorial debut with another self-penned screenplay, Made.[29] Made once again teamed him up with his Swingers co-star Vince Vaughn. In the fall of 2003, he scored his first financial success as a director of the hit comedy Elf starring Will Ferrell, James Caan, and Peter Dinklage. Also in 2003, Favreau had a small part in Something's Gotta Give (a film starring Diane Keaton and Jack Nicholson); Favreau played Leo, Harry Sanborn's (Nicholson) personal assistant, who visited Harry in the hospital.[30] In 2005, Favreau directed the film adaptation of Zathura. Favreau continued to make regular appearances in film and television. He reunited with friend Vince Vaughn in the romantic comedy The Break-Up and appeared in My Name Is Earl as a reprehensible fast food manager. Favreau also made a guest appearance in Vaughn's Wild West Comedy Show.[31]

Also in 2005, Favreau appeared as a guest judge and executive representative of Sony corporation in week five of NBC primetime reality TV business show, The Apprentice. He was called upon to judge the efforts of the show's two teams of contestants, who were assigned the task of designing and building a float to publicise his 2005 Sony Pictures movie, Zathura: A Space Adventure.[32]

Favreau also has a TV series called Dinner for Five which airs on the cable TV channel IFC. On April 28, 2006, it was announced that Favreau was signed to direct the long-awaited Iron Man movie.[33] Released on May 2, 2008, the film was a huge critical[34] and commercial[35] success, solidifying Favreau's reputation as a director.[36]

Iron Man was the first Marvel-produced movie under their alliance with Paramount, and Favreau served as the director and an executive producer. During early scenes in Iron Man, Favreau appears as Tony Stark's driver, Happy Hogan. He also wrote two issues of a planned mini-series for Marvel Knights titled Iron Man: Viva Las Vegas, that debuted in September 2008 before being cancelled in November 2008.[37] Favreau also directed the film's sequel, Iron Man 2.[38] in 2008 he played Denver in Four Christmases with Vince Vaughn.

Favreau with Robert McCurdy, Cole Dabney, Jaime Presley after press junket interview for I Love You, Man at SXSW 2009

Favreau was the third director attached to John Carter, the film adaptation of Edgar Rice Burroughs' swashbuckling space hero. While he did not ultimately direct it, he did appear in a cameo in the film, as a bookie.

Favreau co-starred in 2009's Couples Retreat, a comedy chronicling four couples who partake in therapy sessions at a tropical island resort, which he also wrote. The film saw him reunited with co-star Vince Vaughn, and Kristin Davis played his wife.[39]

He voices the character Pre Vizsla, the leader of the Mandalorian Death Watch, in the episodes of the animated series Star Wars: The Clone Wars.[40]

Favreau said in December 2010 that he would not direct Iron Man 3. He also remained an executive producer of director Joss Whedon's The Avengers.[41][42]

In July 2011, Favreau was featured in a YouTube video by visual effects artists Freddie Wong and Brandon Laatsch (known on YouTube as the popular channel, "freddiew"), in a spoof of his then-upcoming summer film, Cowboys & Aliens. He lent the movie's gauntlet prop to Wong & Laatsch for use in the short.[43]

Favreau directed the pilot for the NBC show Revolution, and also served as one of the show's executive producers, alongside J. J. Abrams.[44]

In 2013, he filmed a pilot for a TV series based on the novel About a Boy, but set in San Francisco.[45] He also directed the Destiny trailer "The Law of the Jungle" and the 2016 film The Jungle Book, for Walt Disney Pictures, which was released on April 15, 2016.[46] He returned as Happy Hogan in the film Spider-Man: Homecoming (2017), and co-executive produced Avengers: Infinity War (2018).

Favreau will appear in the 2019 Untitled Avengers film, directed by the Russo brothers,[47] which will premiere on May 3, 2019.

In September 2016, it was reported that Favreau will direct a live-action remake of Disney's The Lion King.[48][49] On February 17, 2017, Favreau revealed via Twitter that Donald Glover is slated to voice Simba,[50] while James Earl Jones is attached to reprise his role as Mufasa from the original film.[51]

On March 8, 2018, Lucasfilm announced that Favreau will executive produce and write a live-action Star Wars television series, titled The Mandalorian, for the Disney streaming service.[52][53]

In November 2010, it was reported that Favreau will direct a film entitled Magic Kingdom, based on The Walt Disney Company's theme park of the same name.[54] In July 2012, Favreau reported officially that he was working on the film.[55][56] In 2014, he stated that he still had interest in the project, and that he could direct it after finishing filming The Jungle Book.[57]

In November 2012, it was said that Favreau was in talks to direct Star Wars: The Force Awakens, along with David Fincher, Matthew Vaughn and Ben Affleck; but J.J. Abrams was selected to direct the film.[58] However, in June 2015, Favreau stated that although he would not be working on the Star Wars Anthology films, he could work on future Star Wars movies at some point.[59]

On September 28, 2013, Mental Floss reported that at one moment, Favreau tried to direct a sequel to his famous film Elf, entitled Elf 2: Buddy Saves Christmas, but it was later cancelled.[60] In December 2013, Will Ferrell stated that he didn't want to make a sequel to Elf.[61] Despite this, during an interview in January 2016, Favreau stated that a sequel could possibly be made.[62] The next month however, Ferrell reiterated that it's unlikely that the sequel will happen and that he still didn't want to return to the role.[63]

In April 2016, it was reported that Favreau will return to direct the sequel to The Jungle Book, his critically acclaimed live-action adaptation of the animated film of the same name.[64] Despite the fact that Warner Bros. was developing its own Jungle Book film, Mowgli, it was reported that Favreau's film would be released in August or November 2018, although it was later put on hold so he could focus on The Lion King.[65]

Favreau credits the role-playing game Dungeons & Dragons with giving him "...a really strong background in imagination, storytelling, understanding how to create tone and a sense of balance."[67]

Report a problem
Write to Jon Favreau at FanPal • 2021