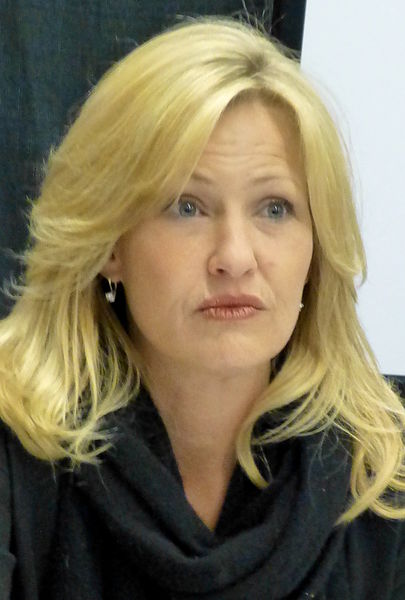 Joey Lauren Adams (born January 9, 1968)[1][2] is an American actress and director who has appeared in more than 40 films. She appeared in several Kevin Smith View Askewniverse films, including Chasing Amy, for which she was nominated for the Golden Globe Award for Best Actress - Motion Picture Musical or Comedy.

Adams began her film career in 1977 with a small role in Exorcist II: The Heretic. From there she began to find larger roles. In 1991, Adams appeared in "Top of the Heap", the 100th episode of Married... with Children, and subsequently starred in its short-lived spinoff. In 1993, Adams landed her first major film role as Simone in Richard Linklater's Dazed and Confused. The same year, she appeared in the Saturday Night Live spinoff film Coneheads as one of Connie Conehead's friends.

Two years later, Adams appeared in Mallrats, written and directed by Kevin Smith. The two started dating during the film's post-production, and their relationship provided the inspiration for Smith's next film, Chasing Amy. The relationship did not last long, but ended on friendly terms. Meanwhile, in 1996, while Smith was finalizing the script for Chasing Amy, Adams was cast in the slapstick comedy Bio-Dome, which was directed by Jason Bloom. Adams played the role of Monique, Bud Macintosh's (Pauly Shore) girlfriend.[3]

In 1997's Chasing Amy, Adams played the lead role of Alyssa Jones, a lesbian who falls in love with a man, played by Ben Affleck. Later, Smith would describe Chasing Amy as a "sort of penance/valentine" and a "thank-you homage" to Adams.[4] In addition to her acting work on the film, Adams wrote and performed the song "Alive" for the film's soundtrack.[3]

Adams' performance in Chasing Amy earned her both the 1997 Chicago Film Critics Award and Las Vegas Film Critics Society Award for Most Promising Actress, and a Golden Globe nomination for Best Actress-Motion Picture Musical or Comedy. From there, Adams was originally slated to play the female lead in Smith's next film, 1999's Dogma, but Linda Fiorentino ultimately was assigned the role.[5] However, she would later make brief appearances in two other Smith projects: the 2001 film Jay and Silent Bob Strike Back, and the 2004 animated short Clerks: The Lost Scene, featured on the Clerks X DVD. In both of these appearances, Adams reprises the Alyssa Jones role.[3]

Her post-Smith projects included playing a spunky veterinarian's assistant who falls in love with a single father (Vince Vaughn) in 1998's A Cool, Dry Place. The following year, Adams appeared in her first big-budget Hollywood release, playing Adam Sandler's love interest in the successful comedy Big Daddy. She then went on to appear in many smaller films, including Beautiful and In the Shadows.[3] In 2005, she had a guest role in an episode of the TV series Veronica Mars.

In 2006, she, along with Lian Lunson and Nicole Holofcener, was awarded the Women in Film Dorothy Arzner Directors Award.[6] On November 24, 2009, Interscope Records released Adams' directorial debut for a music video entitled "Belle of the Boulevard" by Dashboard Confessional.

Adams returned to TV in March 2010, on the Showtime series The United States of Tara. She appeared in six episodes as Pammy, a barmaid who falls for Buck, one of the title character's alternate personalities.

Regarding her voice, she has commented: "It's not a normal voice. It doesn't fit into people's preconceptions about what a woman's voice should sound like. My mom doesn't think I have an unusual voice, though. I'm sure it's helped me get some roles. But Chasing Amy I almost didn't get. There was concern the voice would grate on some people, which some critics said it did."[7] One film critic referred to her voice as a "sex-kitten-on-helium".[8] Another said that whether viewers loved it or hated it, her voice had "the potential to hypnotize."[9]

Adams was born in North Little Rock, Arkansas, the youngest of three children. Her father was a lumber yard owner.[1] Adams grew up in the Overbrook neighborhood of North Little Rock and graduated from North Little Rock Northeast High School in 1986. She announced her intention to pursue acting after one year as an exchange student in Australia.[9] She currently resides in Beverly Hills, California.

Report a problem
Write to Joey Lauren Adams at FanPal • 2023