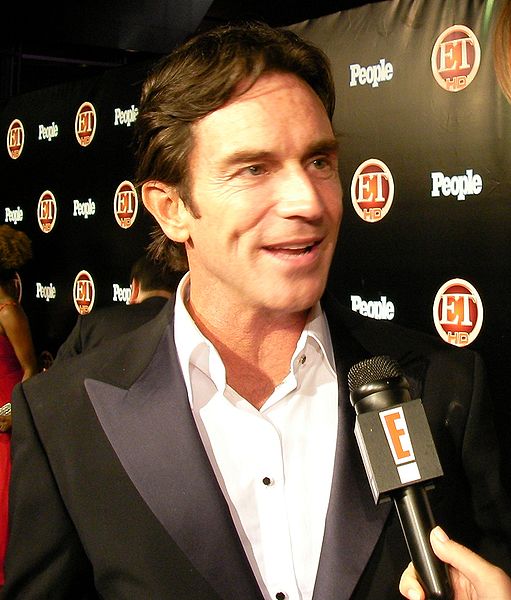 Jeff Probst (born November 4, 1961)[1] is an American game show host and an executive producer. He is best known as the Emmy Award-winning host of the U.S. version of the reality television show Survivor. He was also the host of The Jeff Probst Show, a syndicated daytime talk show produced by CBS Television Distribution from September 2012 to May 2013 that lasted for one season.

Probst was born in Wichita, Kansas to Jerry and Barbara Probst, and grew up primarily in Bellevue, Washington.[2] After graduating from Newport High School in 1979, he attended Seattle Pacific University and worked at Boeing Motion Picture/Television studio as a producer and narrator of marketing videos.
Read more...

In addition to Survivor, Probst once hosted FX's original half-hour show dedicated to answering viewer letters, Backchat, along with Sound FX, a music series featuring Orlando Jones (1996). Probst also hosted the VH1 series Rock & Roll Jeopardy! from 1998 to 2001, and was a correspondent for the syndicated program Access Hollywood. He also wrote and directed the Lionsgate released film, Finder's Fee. People magazine named Probst one of the "50 Most Beautiful People" in 2001. He often contributes to Jeopardy! by giving Survivor related clues from the show's venues, has twice appeared on Celebrity Jeopardy!, first in 2001 and again in 2003, and made several cameo appearances during the April 1, 2010 episode.

He was also a frequent guest star on the sketch show MADtv, guest starring once a season since the show's 9th season.

He has hosted Survivor since 2000. He later stated that he had worked hard to get a meeting with series creator Mark Burnett, because he believed the show was "something special." He delivers the series' signature catch-phrase to losing contestants, "The tribe has spoken. It's time for you to go", which was included in TV Land's "The 100 Greatest TV Quotes and Catch Phrases" special in 2006.[3]

Probst made a guest appearance in a 2003 episode of Space Ghost Coast to Coast on Cartoon Network's Adult Swim.

In 2007, Probst founded The Serpentine Project, a non-profit that works with youth transitioning out of foster care.[citation needed] The organization recently merged with The Alliance For Children's Rights.[citation needed]

On October 20, 2008, TV Guide reported that Probst is developing a new reality TV series for CBS called Live For The Moment[4] that will feature people with terminal illnesses being taken on "the last adventure of their life" before they die.[5]

On April 1, 2009, Probst appeared on the CBS reality television special I Get That a Lot, in which he worked a cash register. In February 2010, Probst confirmed that he has signed on to host two more seasons of Survivor, putting him through season 22.[6] It was then announced on March 9, 2011 that Probst had extended his contract to host another two seasons of Survivor, contracting him through season 24.[7]

In October 2011, he appeared as himself on the sitcom How I Met Your Mother, in the episode "The Stinson Missile Crisis".

In January 2012, Probst was announced as director of his second feature film, coming-of-age story Kiss Me, starring John Corbett and Sarah Bolger, with production scheduled to begin in Los Angeles, California, the following month.[8] Starting on September 10, 2012, he hosted The Jeff Probst Show, a syndicated daytime talk show produced by CBS Television Distribution. CBS did not pick up the show for a second season, citing low ratings.[9] Starting on October 2012, Probst has hosted the recurring Adult Swim special, "The Greatest Event in Television History", which consists of remakes of 1980s TV show title sequences.

In February 2013, Probst teamed up with Christopher Tebbetts to release the first of Scholastic's adventure series Stranded. Stranded is intended for middle school students, grades 4-6. It follows the story of Vanessa, Buzz, Carter, and Jane as they are left on a deserted island and forced to fend for themselves. It started out as a regular vacation but when a storm sets in, the kids are shipwrecked in the middle of the South Pacific without any parents. They must find a way to work together if they are ever to get off the island. Stranded is the first of the three book series.

In December 2016, Probst appeared as himself on the sitcom Life in Pieces, in the episode "Swim Survivor Zen Talk".[12]

Probst was married to his first wife, psychotherapist Shelley Wright, from 1996 to 2001.[13] In 2004, after filming on Survivor: Vanuatu wrapped, he began dating one of the contestants, Julie Berry.[13] They broke up in early 2008.[14] Probst married his second wife, Lisa Ann Russell, on December 5, 2011.[15] Through this marriage, Probst is a stepfather to Russell's two children, son Michael (born in 2004) and daughter Ava (born in 2006), from her former marriage to actor Mark-Paul Gosselaar.[16][17] Probst has stated that he and his wife amicably share custody with Gosselaar and his second wife, and that the children consider all four to be parents.[18]

Probst keeps the snuffer that he uses to snuff the torches when a contestant is voted out of the game as a souvenir after every season of Survivor.[19] He has written a book called Stranded, based on the show Survivor. Probst was ordained as a minister in the Universal Life Church during the 1990s.[20]

On September 21, 2008, Probst won the first Primetime Emmy Award for Outstanding Host for a Reality or Reality-Competition Program. He won the same award in 2009, 2010, and 2011. The Los Angeles Times attributed Probst's undefeated track record in the category to his penchant for interacting with contestants on a compassionate personal level unseen in any of his competitors, transcending his role of host to that of counselor.[21] In 2012, Jeff Probst was not nominated for an Emmy for the first time in years.