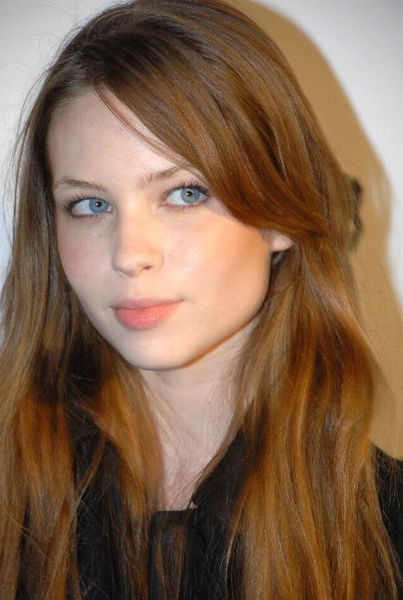 Daveigh Elizabeth Chase (/dəˈveɪ/ də-VAY;[1] born July 24, 1990) is an American actress, voice actress, singer and model. She began her career appearing in minor television parts before being cast as Samantha Darko in Richard Kelly's cult film Donnie Darko. She would subsequently provide the voices of Chihiro Ogino in the English dub of the Studio Ghibli film Spirited Away, and Lilo Pelekai in the Disney animated film Lilo & Stitch and its subsequent franchise, before appearing as Samara Morgan, the child antagonist in the 2002 horror film The Ring.

Between 2006 and 2011, she played a supporting part in the HBO series Big Love, portraying Rhonda Volmer, a sociopathic teenager raised on a fundamentalist Mormon compound. In 2009, she reprised her role as Samantha Darko in S. Darko, a sequel to Donnie Darko. She appeared in the 2016 horror film Jack Goes Home.

Chase's big break came in 2002 when she won the lead role as the voice of a Hawaiian girl, Lilo Pelekai, in the Disney animated feature, Lilo & Stitch. The film relates how Lilo befriends a strange and destructive blue alien thinly disguised as a dog, whom she calls "Stitch", and how she tries to teach him how to behave using Elvis Presley music as exemplars. For her performance, Chase would go on to win an Annie Award in 2003 and star in the follow-up TV series, Lilo & Stitch: The Series. Chase also voiced the role of the lead character, Chihiro Ogino, a 10-year-old Japanese girl, in the American dub of the animated Japanese feature, Spirited Away.[5]

In 2002, Chase starred in the role of Samara Morgan in the feature film, The Ring.[6][7] Chase was awarded the 2003 Best Villain award at the MTV Movie Awards for her performance, beating out Mike Myers, Colin Farrell, Willem Dafoe and Daniel Day-Lewis. In the sequel to The Ring, The Ring Two (2005), Chase was credited for her role as Samara Morgan because of the use of archive footage from the first Ring, but Kelly Stables performed all of the new footage.[8]

In 2006, Chase was given the role of Rhonda Volmer in the HBO drama series Big Love which centers on a polygamist family and its patriarch, Bill Henrickson, played by Bill Paxton. The show focuses upon Henrickson's relationship with his three wives. Chase's character is the child bride of a prophet, Roman Grant, played by Harry Dean Stanton.

Leroy & Stitch, a follow-up to Lilo & Stitch, was released in 2006. Chase then appeared in the second season of Big Love, which aired in 2007. She also plays Betsy in the new PBS Kids show called Betsy's Kindergarten Adventures the same year. She reprised her role as Donnie Darko's younger sister, Samantha, in the film S. Darko.[9] The story picks up seven years after the first film when Samantha Darko and her best friend Corey are now 18 and on a road trip to Los Angeles when they are plagued by bizarre visions.