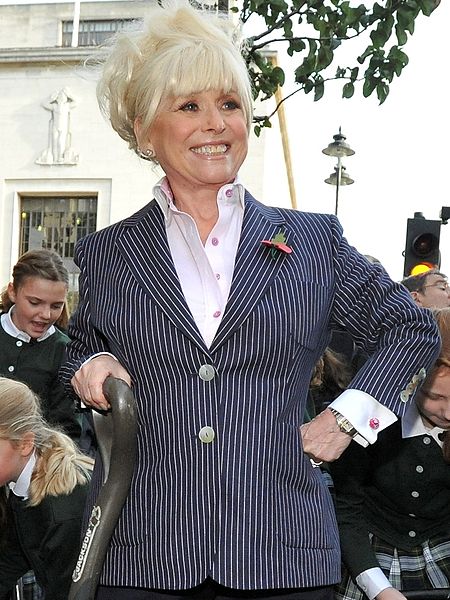 Dame Barbara Windsor, DBE (born Barbara Ann Deeks; 6 August 1937)[3] is an English actress, known for her appearances in the Carry On films and for playing Peggy Mitchell in the BBC One soap opera EastEnders.[4] She joined the cast of EastEnders in 1994 and won the 1999 British Soap Award for Best Actress, before finally leaving the show in 2016.

Windsor was born in Shoreditch, London, in 1937 (her birth was registered in Stepney),[5] the only child of John Deeks, a costermonger, and his wife, Rose (née Ellis), a dressmaker. Windsor is of English and Irish ancestry.[6] She passed her 11-plus exams gaining a place at Our Lady's Convent in Stamford Hill. Her mother paid for her to have elocution lessons, and she trained at the Aida Foster School in Golders Green, making her stage debut at 13 and her West End debut in 1952 in the chorus of the musical Love From Judy. She took the stage name Windsor in 1953, inspired by the Coronation of Queen Elizabeth II.[7]

Her first film role was in The Belles of St Trinian's released in 1954. She joined Joan Littlewood's Theatre Workshop at the Theatre Royal, Stratford East, coming to prominence in their stage production Fings Ain't Wot They Used T'Be and Littlewood's film Sparrers Can't Sing (1963), achieving a BAFTA nomination for Best British Film Actress. She also appeared in the film comedy Crooks in Cloisters (1964), the fantasy film Chitty Chitty Bang Bang (1968) and in the sitcoms The Rag Trade and Wild, Wild Women. Windsor appeared as "Saucy Nancy" in the second series of the ITV children's programme Worzel Gummidge (1980), based on the books by Barbara Euphan Todd.[8]

Windsor at the unveiling of the Joan Littlewood statue at Theatre Royal Stratford East, 4 October 2015 Main article: Carry On films

Windsor came to real prominence with her portrayals of a 'good time girl' in nine Carry On films. Her first was Carry On Spying in 1964 and her final Carry On... film acting role was in Carry On Dick in 1974. She also appeared in several Carry On... television and compilation specials between 1964 and 1977.

One of her most iconic scenes was in Carry On Camping in 1969, where her bikini top flew off during outdoor aerobic exercises. In classic Carry On style, exposure is implied but little is in fact seen.[9]

From 1973 to 1975 she appeared with several of the Carry On team in the West End revue Carry On London! During this time she had a well-publicised affair with her co-star, Sid James.[10]

She was strongly identified with the Carry On films for many years, which restricted the variety of roles she was chosen to play later.

Windsor starred on Broadway in the Theatre Workshop's Oh, What a Lovely War! and received a 1965 Tony Award nomination for Best Featured Actress in a Musical. She also appeared in Lionel Bart's musical flop Twang! (directed by Joan Littlewood) and in the musical Come Spy with Me with Danny La Rue.

In 1970 she landed the role of music hall legend Marie Lloyd in the musical-biopic Sing A Rude Song. In 1972 she appeared in the West End in Tony Richardson's The Threepenny Opera with Vanessa Redgrave. In 1975, she toured the UK, New Zealand and South Africa in her own show, Carry On Barbara!, and followed this with the role of Maria in Twelfth Night at the Chichester Festival Theatre.

In 1981 she played sex-mad landlady Kath in Joe Orton's black comedy Entertaining Mr Sloane at the Lyric Hammersmith, directed by her friend Kenneth Williams. She reprised the role for a national tour in 1993.[11]

When EastEnders was launched in 1985, the producers said they would not cast well-known actors (Wendy Richard being a rare exception). The Shoreditch-born Windsor said that she regretted this, as she'd liked to have taken part.[12]

By 1994 this policy was relaxed, and Windsor accepted an offer to join EastEnders. She took over the role of Peggy Mitchell (who was previously a minor character played by Jo Warne in 1991), for which she received the Best Actress award at the 1999 British Soap Awards and a Lifetime Achievement Award at the 2009 British Soap Awards.

A debilitating case of the Epstein-Barr virus forced a two-year absence from the role between 2003 and 2005, although Windsor was able to make a two episode guest appearance in 2004. She rejoined the cast in mid-2005, initially on a one-year contract, and this was later extended.

The Doctor Who episode "Army of Ghosts", broadcast on 1 July 2006, included a specially-recorded clip featuring her appearing in character. She was seen telling the ghost of Den Watts to "get outta my pub!" (her character's memorable phrase)

In October 2009 Windsor announced she was to leave her role as Peggy Mitchell, saying she wanted to spend more time with her husband.[13] On 10 September 2010 her character left Albert Square after a fire at the Queen Victoria pub, of which she was the owner.[14]

In July 2013, it was announced that Windsor was to return for one episode, which aired on 20 September 2013.[15] She again returned for a single episode on 25 September 2014,[16] and made a further appearance for EastEnders 30th anniversary on 17 February 2015.[17] In February 2015, Windsor, alongside Pam St. Clement (Pat Evans), took part in EastEnders: Back to Ours to celebrate 30 years of EastEnders. Windsor and St. Clement looked back on some of their characters' most dramatic moments.

In November 2015, Windsor secretly filmed a return to EastEnders, which was shown in January 2016. After this, it was confirmed that the character would be killed off later in the year. This was Windsor's decision, as she said that as long as Peggy was alive, she would always be drawn back to playing her.[18] Her last appearance aired on BBC One on 17 May 2016.

Windsor provided the voice of the Dormouse in Walt Disney's live action adaptation of Lewis Carroll's Alice in Wonderland (2010), directed by Tim Burton.[19] Windsor appeared in the pantomime Dick Whittington at the Bristol Hippodrome over the Christmas/New Year period of 2010/2011.[20] On 8 September 2010, it was announced that Windsor will be fronting a TV campaign for online bingo site Jackpotjoy as the Queen of Bingo.[21] She appeared as herself in one episode of Come Fly with Me in January 2011.

Since 2011 she has regularly done presenting work for BBC Radio 2 music and showbusiness history programmes. She reprised her voice role of the Dormouse in the film Alice Through the Looking Glass (2016).[22]

In December 2015, it was leaked that she was to be made a Dame in the New Year Honours list.[23] She was appointed Dame Commander of the Order of the British Empire (DBE) in the 2016 New Year Honours for services to charity and entertainment.[24]

In May 2017, Windsor appeared in a cameo role as herself in the BBC television film, Babs written by EastEnders scriptwriter Tony Jordan. It showed Windsor in the 1990s as she prepares to go on stage and recalls events from her life, including her childhood, marriage to gangster Ronnie Knight, and her roles in the Carry On films.

Windsor has married three times, but has no children.

Before her marriage to Ronnie Knight, she had a one-night stand with notorious East End gangster Reggie Kray and a longer affair with his older brother Charles Kray.[28] While married to Knight, she had a much publicised affair with actor Sid James; Knight is said to have threatened James with violence.[29] Another of Windsor's Carry On co-stars, Kenneth Williams, accompanied her and Ronnie Knight on their honeymoon.[30] During the 1960s, she had a brief relationship with footballer George Best.[31]

In her 2000 autobiography, All of Me, Windsor talks about her five abortions, the first three of which took place in her twenties and the last when she was 42. She has said she never wanted children as a result of her father rejecting her after her parents' divorce.[32]

Windsor was appointed Member of the Order of the British Empire (MBE) in the 2000 New Year Honours. In August 2010, she was given the Freedom of the City of London,[33] and in November 2010, she was honoured by the City of Westminster at a tree planting and plaque ceremony.[34][35]

She was appointed Dame Commander of the Order of the British Empire (DBE) in the 2016 New Year Honours for services to charity and entertainment.[24][36]

In 2012, she became a patron of the Amy Winehouse Foundation,[37] and in November 2014, she was awarded an honorary doctorate from the University of East London.[38]

On 10 May 2018, it was announced by her husband Scott Mitchell, that Windsor had been diagnosed with Alzheimer's disease in April 2014.[39]

Windsor has performed in the following theatre productions:[40]