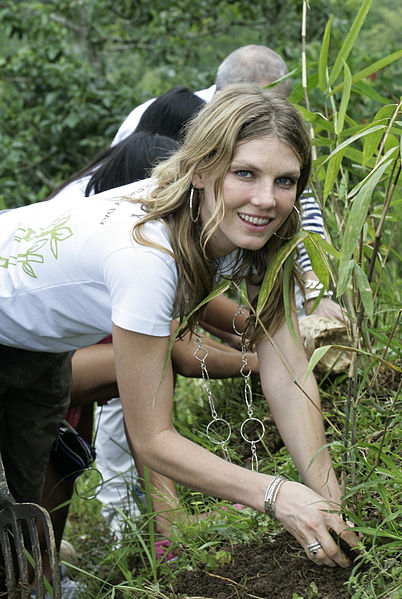 Angela Lindvall (born January 14, 1979) is an American model and actress. Lindvall was discovered by an IMG scout when she was 14 years old, and immediately signed with IMG New York. She took a break from modeling returning when she was 17 years. She was featured on the cover of Italian Vogue in 1997, photographed by Steven Meisel. She was featured on many top magazine covers in the late 1990s and the early 2000s, such as Vogue, Elle, Harper's Bazaar, Maria Claire, Numero, W, i-D, V and so on. And during the peak of her long career, she was always the world's top designers' favourite, such as Karl Lagerfeld, Miuccia Prada, Stella McCartney. She was a Prada Girl and a Chanel Girl. She has worked as the face of Chanel, Gucci, Valentino, Prada, Calvin Klein, Miu Miu, Dior, Louis Vuitton, Hermes, Versace, DKNY, Roberto Cavalli, Fendi, Missoni, Jil Sander, and Jimmy Choo. As an actress, she has appeared in several films, including CQ in 2001 and Kiss Kiss Bang Bang in 2005 and Small Apartments in 2010. She was the host of the fashion reality series Project Runway: All Stars, an extension of the popular series Project Runway.

Lindvall was born in Midwest City, Oklahoma, to Randall Lindvall, a pharmacist, and Laura Rasdall, a medical technologist and massage therapist. She was raised in Lee's Summit, Missouri, and attended Lee's Summit High School. She grew 3 inches from the ages of 13 to 14, and her friends suggested that she try modeling, although it was her sister, Michelle, who wanted to be a model. While doing a local Kansas City fashion show, at age 14, a talent scout spotted her and she signed with IMG.
Read more...

Lindvall has appeared on the covers of many notable magazines, such as ELLE,[3][4] Harper's Bazaar, Marie Claire, Numero, Vogue, I-D and W. She walked in the Victoria's Secret fashion shows in 2000, 2003, 2005, 2006, 2007, 2008, and appeared in Victoria's Secret Holiday Commercial in 2004.[5] and has also appeared in the Fendi, Calvin Klein, Christian Dior, Tommy Hilfiger, Jil Sander, Chanel, Versace, Prada, Gap, Jimmy Choo, Iceberg, DKNY, Chloe, Hermes, Valentino, Louis Vuitton, and H&M[6] campaigns. Off the runway, Lindvall has appeared in commercials for H&M, The Gap, and Victoria's Secret.[7] She was the face of the Spanish "high-street" store Zara, and was featured in their spring/summer 2007 campaign.[8] Lindvall has also appeared in the Sports Illustrated Swimsuit Issue.[9]

In 2010, she left IMG and signed on with modeling agency Women Management. Following this, she also renewed her contract with Jimmy Choo[10][11] and signed a contract to become the face of John Hardy,[12] appearing in all of the company's advertising campaigns between Fall 2010 and Fall 2011. Lindvall partnered with Bedarida again in early 2011 to create the Hijau Dua collection. A continuation of the Hijau collection, a portion of the proceeds from the sale of Hijau Dua pieces were donated to the planting of bamboo seedlings in Bali.

As an actress, Lindvall has appeared in CQ (2001), Kiss Kiss Bang Bang (2005), and Somewhere (2010). She can also be seen in the DKNY promotional films New York Stories (2003) and DKNY Road Stories (2004). In 2011, Lindvall appeared in the TV series Hawaii Five-0. Later, she hosted one season of Project Runway: All Stars on Lifetime Television, an extension of the popular series Project Runway.

Lindvall is an ardent environmentalist and is the founder and president of the Collage Foundation,[13] an organization promoting sustainability and environmentally conscious choices among young people. She was named "Best Dressed Environmentalist" in 2004 and 2005 by the Sustainable Style Foundation.[14]

Combining her experience in the fashion industry and her passion for the environment,[15] in 2009 she teamed up with Edun Live and Yoox.com to design a line of eco-friendly clothing where all proceeds would be donated to Green Cross International.[16][17]

In 2007, during a scouting trip for Alter Eco in Bali,[18] she visited the John Hardy compound and was inspired by the company's value of environmental sustainability.[19] Through a collaboration with John Hardy's head designer and creative director, Guy Bedarida, she helped to design the Hijau collection.[20] Of the collaboration, Bedarida comments "She is a mother, she works. She is very real."[21] All net proceeds from the sale of the Hijau Charity bracelet were donated to Forest Ethics.[22]

In October 2011, Lindvall started her own line with John Hardy called Angela by John Hardy. Sold on QVC, the collection is inspired by Lindvall's travels and interest in ancient cultures.

In 2001, Lindvall went on vacation to Tortola, in the British Virgin Islands, there she met South African diver William Edwards. In February 2002 she gave birth to their son William Dakota and married Edwards that same year. In May 2005, Edwards and Lindvall also had a son together named Sebastian. The couple divorced in June 2006.

Lindvall is the older sister of model Audrey Lindvall. On August 2, 2006, Audrey, an IMG model, who had appeared with Angela in an Ann Taylor magazine advertisement, was killed by a fuel tanker while riding her bicycle in Lee's Summit, Missouri.[23][24]

Report a problem
Write to Angela Lindvall at FanPal • 2023