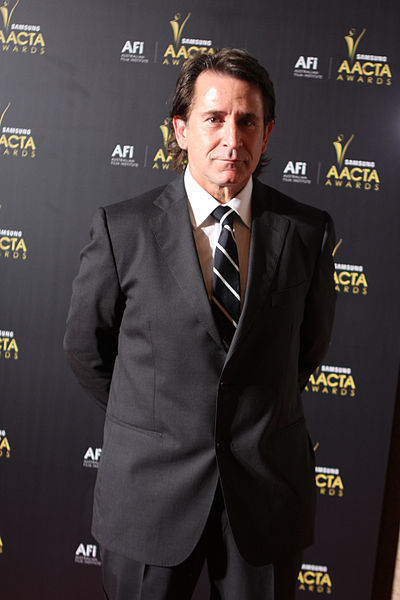 He played the role of Joe in the coming-of-age comedy Empire Records and John in the film Autumn In New York, as well as FBI agent Jack Malone on the American television series Without a Trace, for which he won a Golden Globe Award for Best Actor - Television Series Drama.[2] He also appeared in eight episodes of Frasier as Daphne Moon's alcoholic brother Simon.

LaPaglia starred in the Australian films Looking for Alibrandi, Holding the Man, Lantana and Balibo. For the latter two films he won AACTA Award for Best Actor in a Leading Role in 2001 and 2009.

LaPaglia was born in Adelaide, South Australia, the son of Maria Johannes (née Brendel), a secretary and model, and Gedio "Eddie" LaPaglia (deceased), an auto mechanic and car dealer.[1][2] LaPaglia's mother was Dutch, and his father emigrated from Bovalino, Calabria, Italy, at the age of eighteen.[2] His younger brother, Jonathan LaPaglia, is also an actor, and his other brother, Michael, is a car wholesaler in Los Angeles. LaPaglia attended Rostrevor College and Norwood High School.

LaPaglia was working in Adelaide as a shoe salesman for Florsheim shoes in the early 1980s. He asked to be transferred to the US and continued working there whilst studying acting as he was rejected by the prestigious Sydney drama school NIDA. LaPaglia first began his venture into dramatic art in his late teens, when he enrolled in an acting course at the South Australian Castings Agency (SA Castings) in Adelaide. The two-and-half-year course was to be supplemented with a further three months, which would have included a "boot camp" and a trial listing with SA Castings. After completing one-and-a-half years of the course, LaPaglia left Adelaide for Los Angeles.[citation needed]

LaPaglia's earliest credit was a 1985 part in an episode of the television series Steven Spielberg's Amazing Stories. His first feature film was Cold Steel in 1987, followed that same year by the title role of Frank Nitti in the telemovie Nitti: The Enforcer. LaPaglia had a supporting role as a mobster in the minor hit Betsy's Wedding (1990).

He starred alongside Danny Aiello and Lainie Kazan in 29th Street, a fact-based comedy/bio-pic, as the first New York State Lottery winner, Frank Pesce, Jr. This was followed by roles in the vampire/Mafia story Innocent Blood (1992), the comedy thriller So I Married an Axe Murderer (1993), the legal thriller The Client (1994), and the comedy Empire Records in 1995. That same year, LaPaglia appeared in the role of Jimmy Wyler, lead character in the TV series Murder One, during its second and final season.

During 1997-98, LaPaglia appeared in a Broadway production of Arthur Miller's A View From the Bridge with the Roundabout Theatre Company and later received a Tony Award for his portrayal of the protagonist, Eddie Carbone. LaPaglia also played Tito Merelli in Ken Ludwig's Lend Me a Tenor on Broadway. Before A View From the Bridge opened, LaPaglia was sent a script for the pilot of The Sopranos and met its creator, David Chase, to discuss the role of protagonist Tony Soprano.[3]

However, various factors, including his Broadway role, prevented LaPaglia obtaining the role. "'The Sopranos' thing didn't work out ... and of course it did work out perfectly, because the right person ended up with the role. You can't imagine that show without James Gandolfini." LaPaglia did, however, later play (in an uncredited 2002 cameo) an actor in a Sopranos-style TV show-within-a-film, in the comedy movie Analyze That. (In 2007, The Sopranos reciprocated, by featuring LaPaglia's brother Jonathan in a film-within-the-TV-show.) Spike Lee cast LaPaglia as a New York police detective in Summer of Sam (1999). During 2000-04, LaPaglia appeared in eight episodes of the sitcom Frasier, including the finale, playing Daphne Moon's brother Simon.[2] The role won him an Emmy Award for "Outstanding Guest Actor in a Comedy Series".

In 2002, LaPaglia co-starred as a fire captain opposite Sigourney Weaver in The Guys, a film about New York firemen who died in the World Trade Center. He also played the role onstage, rotating with Bill Murray and others. "We did it as a tribute to the men," said LaPaglia. "I've been so lucky to do it, to be part of this experience. But I can't go back to that morning or watch the video. It's too painful."[4] He also played fictional Australian actor Anthony Bella (who played Nicky Caesar in the fictitious series 'Little Caesar') in the comedy movie Analyze That, but was uncredited in his role.[citation needed]

In addition to playing the central character in Without a Trace during 2002-09, LaPaglia co-wrote an episode entitled "Deep Water".[5]

In October 2011 it was announced that LaPaglia would join the cast of Quentin Tarantino's new film Django Unchained, in which he would portray an Australian character once again.[7] However, he eventually left the project, calling the production "out of control."[8]

In February 18, 2012, it was announced that LaPaglia would star in the ABC drama pilot Americana.[9] The show was not picked up.[10]

It was announced in May 2013 that LaPaglia signed on in the feature adaptation of Stephen King's A Good Marriage with Joan Allen.[11]

In March 2014, LaPaglia joined a new CBS terrorism drama pilot titled Red Zone starring as a retired CIA operative and current high school football coach who returns to active duty after a terrorist attack in Washington, D.C.[12] It was renamed Field of Play and not picked up for the 2014 season.[13][14][15]

From about 2012, LaPaglia began accepting work in Australia more frequently. Following major roles in Underground (2012) (a biopic about Julian Assange and the comedy Mental (2012), LaPaglia had a supporting role in the Neil Armfield's Australian romantic-drama film Holding the Man, as Bob Caleo. The 2015 film stars Ryan Corr and Craig Stott, with supporting performances from LaPaglia, Guy Pearce and Geoffrey Rush. Holding the Man was adapted from Timothy Conigrave's 1995 memoir of the same name. For his role within the film, LaPaglia was nominated for an AACTA Award for Best Actor in a Supporting Role at the 5th AACTA Awards in 2015. In that year LaPaglia returned to his home city, Adelaide, to star in A Month of Sundays as Frank, a miserable real estate agent who finds solace and redemption in a chance friendship with an elderly woman (played by Julia Blake) who reminds him of his mother. In 2016 he appeared in his first Australian TV series: The Code, a political thriller set against rising geopolitical tensions between the USA and China. The following year he starred in the four-part miniseries Sunshine, set in the western Melbourne suburb of the same name, playing the role of mentor to a promising young Sudanese-Australian soccer player. And in 2018, LaPaglia appeared in the fifth season of the comedy Rake, based loosely on the life and misadventures of Charles Waterstreet.

In 2017, LaPaglia interpreted Vito Rizzuto in the Simon Barry TV series Bad Blood which aired on CityTV, in French on ICI Radio-Canada.[16]

In 2017 starred in Sunshine an Australian crime drama series screened on SBS from Wednesday 18 October 2017.[17] The four-part miniseries is an Essential Media production, directed by Daina Reid and written by Matt Cameron and Elise McCredie.[18]

From 2017, stars in veteran filmmaker Neil Jordan's, sumptuous series Riviera. Set in the French Riviera, the series follows Georgina Clios, a midwestern art curator whose life is turned upside down after the death of her billionaire husband Constantine Clios ( LaPaglia) in a yacht accident. Georgina becomes immersed in a world of lies, double-dealing and crime, as she seeks to uncover the truth about her husband's death.[19]

LaPaglia currently lives in Santa Monica, California, USA. He has said that he adopted an American accent to help him get acting work after moving to the US. His current accent is neither distinctly American nor is it Australian, but, rather, a combination of both.[20] According to an offhand remark by LaPaglia, he has employed an American accent since 1982.[21] LaPaglia is the godfather of Poppy Montgomery and Adam Kaufman's son, Jackson.

LaPaglia's first marriage was to actress Cherie Michan. His second marriage was to actress Gia Carides, whom he met at a party;[2] the two starred in the 1994 Australian movie Paperback Romance (a.k.a. Lucky Break) and married in 1998.[1] Their daughter Bridget was born in January 2003. In April 2015, newspapers reported that LaPaglia and Carides had split after 17 years.[22][23]

In the 1980s, LaPaglia was a goalkeeper in the National Soccer League, playing for Adelaide City and West Adelaide.[2] LaPaglia was part owner of A-League club Sydney FC until 2008; flying from California to Sydney to attend their matches since their inception in 2005. He was the narrator and executive producer of The Away Game, a critically acclaimed television documentary exploring the experiences of Australian footballers in Europe.

He plays occasionally with Hollywood United, an amateur organisation of which he is club president, with others in the entertainment industry including Frank Leboeuf, Vinnie Jones, Steve Jones (of the Sex Pistols) and others.

LaPaglia has a minority shareholding in the International Goalkeepers Academy. The Academy was founded and is operated by James Fraser, who represented the Australian national team leading up to the 1974 FIFA World Cup.

LaPaglia has volunteered as an actor with the Young Storytellers Program. He played in a charity football match in 2007 to raise funds for Southern California wildfire relief.[24]

Report a problem
Write to Anthony LaPaglia at FanPal • 2023