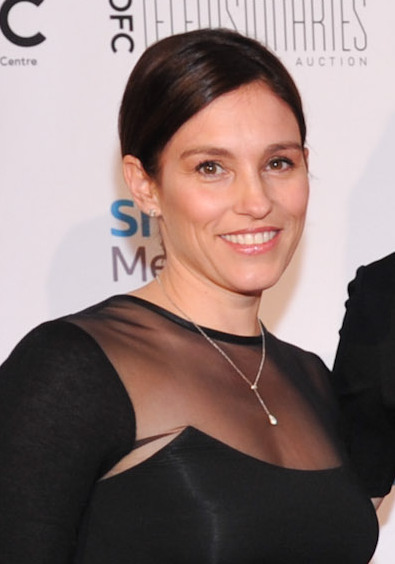 Amy Jo Johnson (born October 6, 1970) is an American Canadian actress, filmmaker, singer-songwriter, and director. Johnson began her acting career in her early twenties, in Mighty Morphin Power Rangers, and, after she left the series, went onto star in Felicity, The Division, and Flashpoint while pursuing a career as a musician and a filmmaker.

Amy Jo Johnson was born on October 6, 1970 in Hyannis, Massachusetts, the daughter of Greig Johnson, Sr., a car salesman, and Christine Johnson (d. 1998), a clothing store manager. She has two siblings, Greig Johnson, Jr. and Julie Johnson-Clary.[1] Though born in Hyannis, Johnson grew up in Dennis, Massachusetts and attended Dennis-Yarmouth Regional High School.[2] As a child, she studied gymnastics.

Johnson is married to Olivier Giner.[3] The two live in Toronto, Canada and have one child together, a daughter named Francesca Christine Johnson (b. 2008).[4][5] She became a Canadian citizen on June 23, 2015, making her a dual-citizen of the United States and Canada.[6]

Johnson moved to New York City at 18 to pursue an acting career. She attended the Lee Strasberg Theatre Institute and the American Musical and Dramatic Academy. She later moved to Los Angeles to audition for her first part.

Johnson's breakthrough role came less than a month after she moved to Los Angeles, when she was selected to portray Kimberly Hart, the Pink Ranger, in Mighty Morphin Power Rangers, the first installment of the Power Rangers franchise. Despite the series being a huge success and brought Johnson international recognition as an actress, the show brought her little financial security, as she and the others were paid only $600 a week for their work on the show, which included stunt work and public appearances; none of the cast received any royalty payments from re-runs of episodes they appeared in.[7][8] As a non-union show, physical danger on set presented a very real threat to Johnson; while filming Mighty Morphin Power Rangers: The Movie, she was almost set on fire during a stunt and, during Turbo: A Power Rangers Movie, she was almost electrocuted.[9][10] Johnson ultimately made the decision to leave the show in 1995, passing the role of the Pink Ranger to Australian actress Catherine Sutherland. In an appearance on I Love the '90s, Johnson jokingly stated that having been the Pink Power Ranger was something she would "never live down." In later years, Johnson stated that becoming famous from the show was at times overwhelming and had given her nightmares, but that overall, she learned many things and is grateful to the show and her fans.[11][12] In all, Johnson's character appeared in 137 episodes in the franchise, her final TV appearance being in a 2014 episode of Power Rangers Super Megaforce. She, alongside former co-star Jason David Frank, made a cameo appearance in the 2017 film Power Rangers, though not as Power Rangers.

After she left the series in 1995, Johnson went on to star in Disney Channel's Susie Q and in the Saved by the Bell: The New Class episode "Backstage Pass." In 1997, she starred in NBC's adaptation of Lois Duncan's novel Killing Mr. Griffin and played a gymnast with an eating disorder in Perfect Body. Johnson also participated in the film Without Limits. She also reprised her role as Kimberly Hart in Turbo: A Power Rangers Movie.

In 1998, Johnson was invited to play Julie Emrick in The WB series Felicity. She held a main role on Felicity for three seasons and was a special guest in its fourth and final season.

In the early 2000s, Johnson had roles in Interstate 60, Pursuit of Happiness, and Infested, as well as television film Hard Ground. She also had guest starring roles on Spin City and ER. In 2004, she starred as Stacy Reynolds in the fourth season of The Division. In the latter half of the decade, she had recurring roles in Wildfire and What About Brian, and she starred in television films Magma: Volcanic Disaster on Syfy and Fatal Trust on Lifetime. In addition, Johnson took parts in a few independent films: Veritas, Prince of Truth and Islander.

Beginning in 2008, Johnson became a series regular on Flashpoint as Constable Jules Callaghan, a member of the fictional Strategic Response Unit of the Toronto Police service.[13] She was nominated for a Gemini Award for her performance. The show aired new episodes through 2012.

Since 2012, Johnson has had guest roles on a few shows including a recurring role on USA's Covert Affairs.

She is a member of Film Fatales.

Johnson is a singer-songwriter and has released three albums: The Trans-American Treatment (2001), Imperfect (2005), and Never Broken (2013).[16] She has performed in the Los Angeles area with The Amy Jo Johnson Band. In December 2007, she contributed guest vocals to Koishii & Hush's cover of The Cars track "Since You're Gone", which was released as a single.[17]

Some of Johnson's music has been featured on television shows. Johnson's character in Felicity was originally described as a dancer, but with Johnson's input, the producers rewrote the character as a singer and guitarist. As a result, Johnson was able to perform her own song, "Puddle of Grace," on the show. In Flashpoint, her songs "Dancing In-Between" and "Goodbye" were featured.[18]

Among other notable recognitions, Johnson received a nomination for Best Performance by an Actress in a Continuing Leading Dramatic Role at the 24th Annual Gemini Awards in 2009. She also received two nominations as Best Actress for her role in Flashpoint at the Monte Carlo TV Festival.[22][23]

As a featured performer