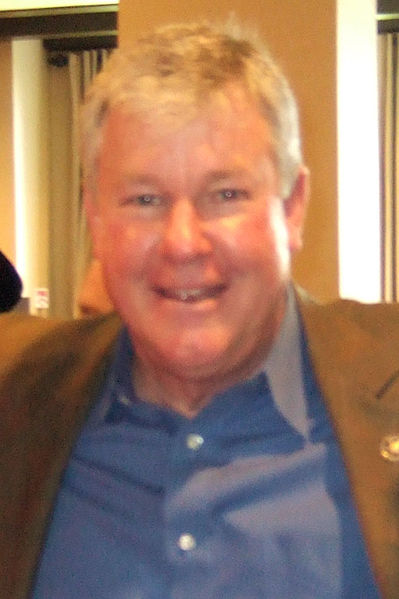 Larry Wilcox (born August 8, 1947) is an American actor known for his role as California Highway Patrol Officer Jonathan "Jon" Baker in television series CHiPs, which ran from 1977 to 1983 in which he was assigned 7 Mary 3 and became partners with Francis Llewelyn "Frank" Poncherello. He left the series after the end of the fifth season. He is a decorated Marine veteran, accomplished motorcycle rider, race car driver, Bonneville Salt Flats land speed record holder, and private pilot.

Wilcox was born on 8 August 1947 in San Diego, California, the son of Marion G. and John C. Wilcox.[1] He was raised in Rawlins, Wyoming, with his three siblings by a single parent - their mother.

He graduated from Rawlins High School went to the Univ of Wyoming, then transferred to L.A. Pierce College and joined the U.S. Marines. eventually went to Cal State Northridge. He worked at different jobs including acting and rodeo cowboy. Wilcox joined the Marines in May 1967 and served 13 months in Vietnam during the Tet Offensive.[citation needed] While in Vietnam he studied French and took general classes at College of the Desert during his final year in the Marines at 29 Palms, California. He was honorably discharged with the rank of staff sergeant in 1973.[2]

Wilcox made a guest appearance in 1971 in Room 222. In 1973, Wilcox appeared in The Streets of San Francisco episode "The Runaways" as older brother George. Also in 1973, he starred in Lassie as Dale, one of the boys who grew up there and was now working as a hired hand. Wilcox appeared in an episode of Cannon "Target In The Mirror" in 1973 in an uncredited role as a witness. He performed in the 1976 film The Last Hard Men, and other TV appearances including The Partridge Family, Hawaii Five-O, M*A*S*H, Fantasy Island, and Police Story, as well as commercials. He was the main (and only human for most of it) actor of a two-part show on the Disney anthology show in the mid-1970s playing a lone cowboy on a cattle drive and their adventures en route to market.

Wilcox and Erik Estrada on CHiPS in 1977

Wilcox was cast as Jon Baker, one of the lead characters on CHiPs; he was not in season six and was cast from 1977-1982. Wilcox performed many of his own stunts on the show. Unlike his co-star Erik Estrada (who played his partner "Ponch"), Wilcox never sustained any major injuries. By the 1979-80 season, he made $250,000 per episode (the same amount as Estrada) and it escalated thereafter. During his time on CHiPs, Wilcox appeared on the cover of TV Guide three times, along with Estrada.[3]

Rumors of friction between the two had occurred late in the 1978-79 season, but it calmed down after Estrada's injury at the beginning of the 1979-80 season as Wilcox came to his friend's rescue. Wilcox confirmed that some of the rumors of on-set feuding were true, but minor issues blown out of proportion. He added: "We're just two totally different people."[4]

Wilcox is among the cast members who appeared at a reunion in Los Angeles to celebrate the series' 35th anniversary. Wilcox filmed the event and helped raise money for police officers and for kids at risk. Wilcox stated he called Estrada to invite him, as did Robert Pine, but Estrada did not return calls nor did he show up for the event. Estrada's manager said he was trying to establish a new and separate identity from CHiPs.[5]

In 1982, Wilcox left CHiPs and formed his own production company, Wilcox Productions, which produced the award-winning TV series for HBO The Ray Bradbury Theater for five years. He developed, optioned, and sold to MGM The Yorkshire Ripper and sold to Columbia The Wolfman Jack Story. Later, Wilcox optioned Flipper and was the executive producer of that movie for Universal Pictures. He also continued acting and directing. Presently, Wilcox works with Saratoga Entertainment which is a production and digital distribution company. He also is a consultant to Enabledware, which is a rule-based digital distribution software in 57 languages with a focus on digital universities and security for sports stadiums.

Wilcox was executive producer of the TV movie Death of a Playmate: The Dorothy Stratten Story. The story had a deeper resonance for Wilcox, whose older sister was fatally shot in front of her three children, her mother, and 17 witnesses. The accused murderer, her husband, was later acquitted in a celebrated trial in Wyoming and subsequently killed in a barroom brawl, according to Wilcox.[4]

He appeared in a 1985 made-for-TV movie sequel to The Dirty Dozen, called The Dirty Dozen: Next Mission. He played a convicted war prisoner Tommy Wells, recruited to help terminate a German general who is plotting to assassinate Hitler. Wilcox was reunited briefly on-screen with his former co-star Estrada in National Lampoon's Loaded Weapon 1, and then again in 1998, where he reprised his role of Jon Baker (now Captain Baker) in the Turner Network Television production of CHiPs '99. In 2008, Wilcox had a brief cameo in the music video for Rehab's song "Bartender Song (Sittin' at a Bar)". He played a California Highway Patrol sergeant, a reference to his role on CHiPs.[citation needed]

He appeared in a cameo as himself dressed as Officer Jon Baker on the 2009 Christmas episode of 30 Rock. Wilcox also completed a cameo in the feature film Two Sillies. He made a brief appearance as mine owner Bob Freeman in the 2016 drama 94 Feet.[citation needed]

Wilcox married his first wife, Judy Vagner, on March 29, 1969, while serving his last months of duty after returning from the Vietnam War. They had two children together, Derek and Heidi.

His second marriage was to Dutch native Hannie Strasser, a one-time CHiPs assistant sound technician. The wedding took place on April 11, 1980. They honeymooned in New Zealand enjoying relative anonymity at that time. Their daughter, Wendy, was born in 1982 and they divorced immediately. Wilcox raised Wendy.

On March 22, 1986, Wilcox married Marlene Harmon, a member of the 1980 Olympic heptathlon team. They reside in the San Fernando Valley and have two sons, Chad and Ryan. He assisted in caring for his father-in-law Russ, a stroke patient, who has since died.

Wilcox set up an NPO Hub website to benefit police officers killed in the line of duty and various philanthropic projects. in 2018 he put together two significant film and technology funds for his entertainment companies and his digital city vision.

In November 2010, Wilcox pleaded guilty to criminal charges of conspiracy to commit securities fraud. The U.S. Justice Department alleged that Wilcox had paid a commission which was deemed illegal as a kickback as a result of an FBI sting operation. Wilcox proved that all of his shares were still in his control and none were sold but due to the fact that he paid an illegal commission on a pension fund and was introduced by a party who with 40 others was involved in a pump and dump, Wilcox was now guilty as a conspirator. In pleading guilty, Wilcox stated before the court, "This was an aberration as I betrayed my core values with what I did. I am deeply sorry." He was given a $100 fine, three years probation, and 500 hours of community service. He performed over 1000 hours of community service.[6][7]