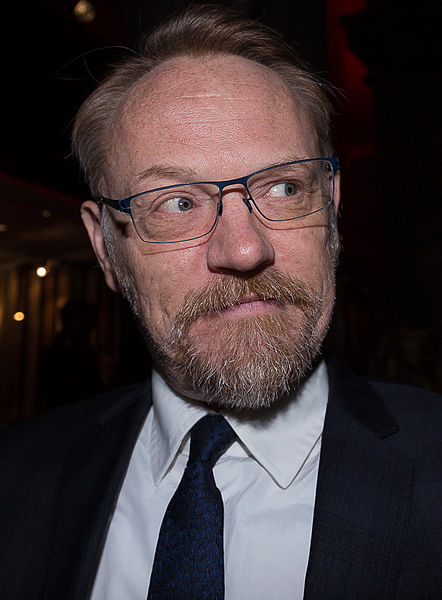 Jared Francis Harris (born 24 August 1961) is a British actor, best known for his roles as Lane Pryce in the television drama series Mad Men, David Robert Jones in the science fiction series Fringe, King George VI in the historical series The Crown, Anderson Dawes on the science fiction series The Expanse and captain Francis Crozier in the AMC series The Terror. He has also had significant supporting roles in films such as Mr Deeds (2002), The Curious Case of Benjamin Button (2008), Sherlock Holmes: A Game of Shadows (2011), Lincoln (2012), and Allied (2016).

Harris was educated at Ladycross, a former preparatory boarding independent school in the coastal town of Seaford in East Sussex, as were his brothers Jamie and Damian. He says, "They were famous for discipline, with cold showers every morning", and that "You were never known by your first name there. You were either called by your number, or your last name. Since there were three of us, Damian was 'Harris Ma' for major. I was 'Harris Mi' for minor, and Jamie was 'Harris Minimus,' being the youngest and the smallest".[3] He then went to Downside School, a Catholic boarding independent school in the village of Stratton-on-the-Fosse (near the market town of Shepton Mallet) in Somerset, in South West England,[3] followed by Duke University in the city of Durham, North Carolina, in the United States, where he earned a BFA degree in 1983.[citation needed]

Harris began his film career as director of named Darkmoor (1983), an unfinished feature-length film for Duke University's Freewater Films. His first film appearance as an actor was in The Rachel Papers (1989). He played the role of the aged Will Robinson in the movie adaptation of the television series Lost in Space. Harris played Dr. Charles Ashford in Resident Evil: Apocalypse, Benmont Tench in Jim Jarmusch's Dead Man, and Kenneth Branagh's character's doppelgänger in How to Kill Your Neighbor's Dog.

Other notable roles include King Henry VIII in the 2003 film adaptation of the novel The Other Boleyn Girl. He also portrayed Andy Warhol in I Shot Andy Warhol and John Lennon in the television movie Two of Us (2000). He played Vladimir in the black comedy drama film Happiness (1998), written and directed by Todd Solondz. He played the gruff Captain Anderson in the BBC2 adaptation of To the Ends of the Earth; Mac McGrath in the movie Mr. Deeds; Eamon Quinn on the FX series The Riches; and David Robert Jones on Fringe. One of his more recent film roles was Ulysses S. Grant in the Steven Spielberg-directed Lincoln.[4] He played Lane Pryce in Mad Men from 2009 until 2012 and returned to the series to direct the 11th episode of season 7, which aired in 2015. He also portrayed King George VI in the first season of The Crown.

Report a problem
Write to Jared Harris at FanPal • 2022