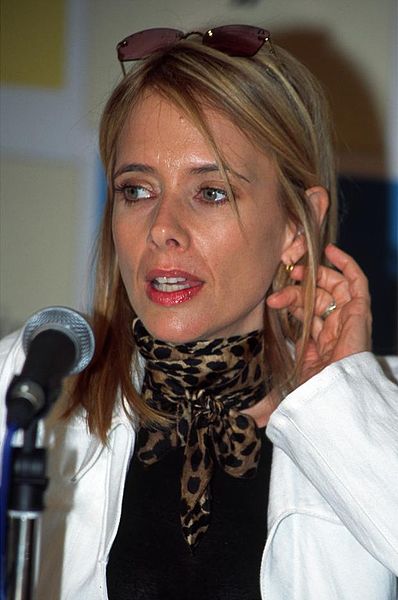 Rosanna Lisa Arquette (/roʊˈsɑːnə/ roh-SAH-nə; born August 10, 1959) is an American actress, film director, and film producer. She was nominated for an Emmy Award for her performance in the 1982 TV film The Executioner's Song, and won the BAFTA Award for Best Actress in a Supporting Role for the 1985 film Desperately Seeking Susan. Her other film roles include After Hours (1985), The Big Blue (1988), Pulp Fiction (1994) and Crash (1996). She also directed the 2002 documentary Searching for Debra Winger, and starred from 2006 to 2007 on the ABC sitcom What About Brian?

Arquette was born in New York City, the daughter of Brenda Olivia "Mardi" (née Nowak; 1939-1997), an actress, poet, theater operator, activist, acting teacher, and therapist, and Lewis Arquette, a film actor, screenwriter, and producer.[1] Her paternal grandfather was comedian Cliff Arquette. Her mother was Jewish, from a family that emigrated from Poland and Russia.[2][3][4][5][6] Her father, whose family's surname was originally "Arcouet", was of part French Canadian descent.[7] Her father was a convert from Catholicism to Islam; through him, Arquette is distantly related to explorer Meriwether Lewis.[8][6][9] Her siblings, Richmond, Patricia, Alexis, and David, all became actors as well.
Read more...

Arquette has appeared in both television and screen films. In 1982, she earned an Emmy Award nomination for the TV film The Executioner's Song. However, she was unhappy with the film's nude scene, remarking in an interview that the idea of the general public seeing her naked made her feel uncomfortable and exploited, and that most of the offers she'd received since demanded that she similarly expose herself.[10] Arquette's first starring role was in John Sayles's 1983 film, Baby It's You, a highly regarded[11] but little seen[12] film. She starred in Desperately Seeking Susan (1985) alongside pop singer Madonna, for which she won a British Academy Film Awards (BAFTA) for her "supporting" role despite her clearly being the lead. Madonna was breaking out at the time and though many feel that while Arquette's performance was central to the movie's success, Madonna made the movie into a mainstream hit. She had negotiated a deal where she would provide a song for the movie. "Into The Groove" became a huge hit for Madonna as did the movie itself. In an interview at the time, Arquette said "The two questions I hate the most are 'What was it like working with Madonna?' and 'Are you the Rosanna in the song "Rosanna"?'" Following the commercial and critical success of Lawrence Kasdan's Silverado in 1985, and the failure of both After Hours and 8 Million Ways to Die, she quit Hollywood to work in Europe, acting in Luc Besson's The Big Blue (1988).

In 1989, director Martin Scorsese offered her a part in New York Stories. Other movies of note are Pulp Fiction and the David Cronenberg film Crash and the Australian film Wendy Cracked a Walnut (1990) (also known as …Almost). In 1990, Arquette appeared on the cover and in a nude pictorial in Playboy's September issue, although she claimed it was without her prior knowledge or consent.[13]

In recent years, Arquette has expanded into directing, including the documentaries Searching for Debra Winger (2002) and All We Are Saying (2005); she also produced both projects.

Arquette appeared in the short running What About Brian as Nicole Varsi and on Showtime's The L Word as Cherie Jaffe.[citation needed] She also guest starred on Malcolm in the Middle as a healer named Anita who takes Malcolm's virginity. Bryan Cranston, one of her former co-stars from Amazon Women on the Moon, also played Malcolm's dad Hal.

In 2009, she joined Fit Parent Magazine, founded by Craig Knight, as Editor at Large.[14] Arquette stars in the French thriller The Divide, directed by Xavier Gens.[15]

Arquette dated Toto keyboardist Steve Porcaro in the 1980s. The song "Rosanna" was partly based on her.[16] She was romantically involved with Peter Gabriel for several years; his song "In Your Eyes" is said to be inspired by her.[17][18]

In 2010, Rosanna Arquette became Goodwill Ambassador for The Womanity Foundation.[20]