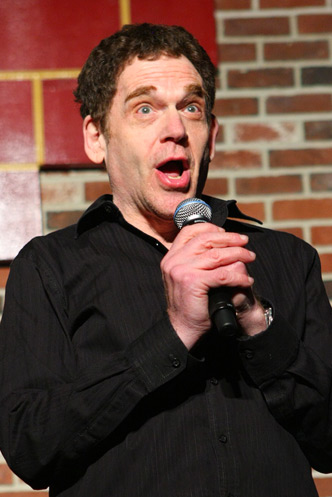 Charles Fleischer (born August 27, 1950) is an American stand-up comedian, actor, writer and musician, best known for appearing in films such as A Nightmare on Elm Street, Who Framed Roger Rabbit, Back to the Future Part II, The Polar Express, Rango, and We're Back! A Dinosaur's Story.[1] He also reprised the role of Roger Rabbit in the Roger Rabbit theatrical shorts. After beginning his career on the comedy club circuit, Charles Fleischer's first big break in comedy television came when he made an appearance on Rowan & Martin's Laugh-In.[2]

Fleischer was born and raised in Washington, D.C. on August 28, 1950. He attended Southampton College of Long Island University and studied acting at Chicago's Goodman Theatre. Fleischer has written a science paper regarding the nature of gamma ray bursts that appears on the Cornell University Library website.[3]
Read more...

Fleischer is best known as the voices of Roger Rabbit,[4][5] Benny the Cab, Greasy, and Psycho in Who Framed Roger Rabbit. After the film's success, he continued to perform the voice of Roger in several Disney television and theme park appearances at several of the Walt Disney Parks and Resorts, and in three follow-up short subjects to the original film. Other voice roles for Fleischer include The Polar Express and We're Back! A Dinosaur's Story. On-screen roles include Back to the Future Part II and Gridlock'd. Fleischer's first movie role was as "Brick" who was one of Richie's friends (played by Robby Benson) in the movie The Death of Richie, released January 10, 1977.

Fleischer had a recurring role on the 1970s TV series Welcome Back, Kotter as Carvelli, as Chuck on the ABC series Laverne & Shirley, and on the Disney cartoon series House of Mouse as the voice of Benny The Cab. Fleischer appeared for the first time on The Tonight Show with Johnny Carson Show on the evening of May 15, 1974. He was also a regular on Keep on Truckin'. He guest starred in The Weird Al Show as a guy in a band. He also appeared on the short-lived Saturday morning show, Wacko.

He is also a musician and songwriter. He performed as a guest on harmonica with the group Blues Traveler at the Wiltern Theater in Los Angeles on November 22, 1995.[citation needed]

Fleischer is now the part-owner of a multi-media company in Southern California and a writer for television and movies.[citation needed] He still does stand-up gigs occasionally.

From December 2010 to September 2011, he hosted his own weekly web show Fleischer's Universe on Ustream.tv, produced by Brad Wyman.