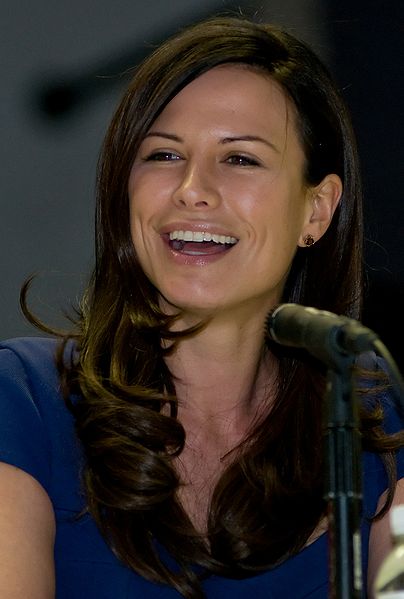 Mitra was born in Hampstead, London,[2] the daughter of Anthony Mitra, a cosmetic surgeon, and Nora Downey. Her father is of Bengali Indian descent, while her mother is Irish. She has a brother, Jason, who is two years older, and a younger brother, Guyan, who is a travel writer for Lonely Planet and The Sunday Times.[3]
Read more...

Mitra appeared as the live action model for Lara Croft, the lead character in Eidos Interactive's Tomb Raider video game series before Angelina Jolie took the role for the two Tomb Raider films (2001-2003).[4] Mitra was ranked No. 46 on the Maxim Hot 100 Women of 2001.[5] She played the romantic interest of Christopher Lambert in Beowulf. Her first main role came as Scott Wolf's illicit love interest on Party of Five. In 2000, Mitra had a small role in the film Hollow Man, as a neighbour sexually assaulted by Kevin Bacon's character. She had a main role in the medical drama Gideon's Crossing, as Dr. Alejandra "Ollie" Klein. Mitra then had roles in Ali G Indahouse, Sweet Home Alabama, Stuck on You, and leading roles in Highwaymen and Spartacus. Mitra appeared in the final season of The Practice as Tara Wilson, and continued that role into its spin-off Boston Legal, but left not long into the second season. In 2005, Mitra played the role of Kit McGraw during Season 3 of Nip/Tuck. Mitra then went on to appear in Skinwalkers, The Number 23 and Shooter.

In 2008, Mitra starred in the lead role of the science fiction/action film Doomsday as Major Eden Sinclair (sometimes mistakenly named in some databases as being Caryn Peterson), and in 2009 went on to star in Underworld: Rise of the Lycans as Sonja, the daughter of the powerful vampire elder Viktor (played by Bill Nighy). While filming, she grew fond of her vampire fangs, even declining to remove them when they couldn't be seen. "I put those fangs on the first day and I felt they should always have been there; it's strange. So I kept them in through the entire time of shooting, throughout all my dialogue and everything."[6] She also appeared in three episodes of Stargate Universe.

In 2014 and 2015, she played Dr. Rachel Scott in the first two seasons of Michael Bay's post-apocalyptic television series, The Last Ship.[10]

In 2017, she played Charlotte in the fourth season of The Strain TV Series.

in 2018, Mitra was cast as Mercy Graves in The CW television series Supergirl.[11]

Rhona Mitra was nominated for a Screen Actors Guild Award in 2006 from Boston Legal TV Series. She was also nominated in 2009 for Scream Awards for Best Actress from Underworld: Rise of the Lycans.