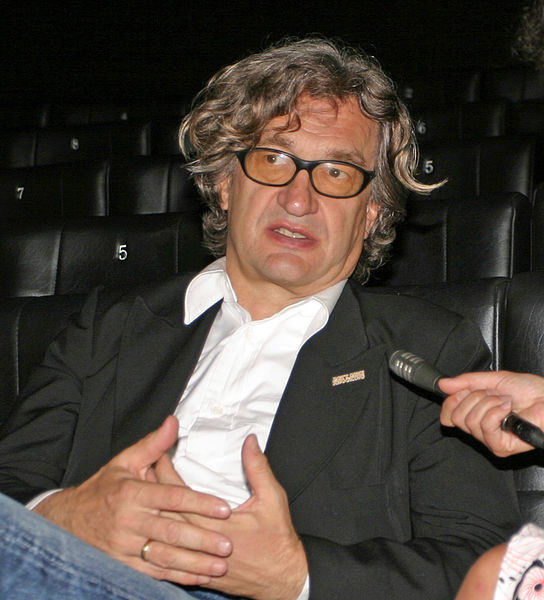 Ernst Wilhelm "Wim" Wenders (born 14 August 1945) is a German filmmaker, playwright, author, photographer, and a major figure in New German Cinema. Among many honors, he has received three nominations for the Academy Award for Best Documentary Feature: for Buena Vista Social Club (1999), about Cuban music culture, Pina (2011), about the contemporary dance choreographer Pina Bausch, and The Salt of the Earth (2014), about Brazilian photographer Sebastião Salgado.

One of Wenders' earliest honors was a win for the BAFTA Award for Best Direction for his narrative drama Paris, Texas (1984), which also won the Palme d'Or at the 1984 Cannes Film Festival. Many of his subsequent films have also been recognized at Cannes, including Wings of Desire (1987), for which Wenders won the Best Director Award at the 1987 Cannes Film Festival.

Wenders has been the president of the European Film Academy in Berlin since 1996. Alongside filmmaking, he is an active photographer, emphasizing images of desolate landscapes.[1][2] He is considered to be an auteur director.[3]

Wenders was born in Düsseldorf into a traditionally Catholic family. His father, Heinrich Wenders, was a surgeon. The use of the Dutch name "Wim" is a shortened version of the baptismal name "Wilhelm/Willem". As a boy, he took unaccompanied trips to Amsterdam to visit the Rijksmuseum. He graduated from high school in Oberhausen in the Ruhr area. He then studied medicine (1963-64) and philosophy (1964-65) in Freiburg and Düsseldorf. However, he dropped out of university studies and moved to Paris in October 1966 to become a painter. Wenders failed his entry test at France's national film school IDHEC (now La Fémis), and instead became an engraver in the studio of Johnny Friedlander, in Montparnasse. During this time, Wenders became fascinated with cinema, and saw up to five movies a day at the local movie theater.

Set on making his obsession also his life's work, Wenders returned to Germany in 1967 to work in the Düsseldorf office of United Artists. That fall, he entered the "Hochschule für Fernsehen und Film München" (University of Television and Film Munich). Between 1967 and 1970 while at the "HFF", Wenders also worked as a film critic for FilmKritik, then the Munich daily newspaper Süddeutsche Zeitung, Twen magazine, and Der Spiegel.

Wenders completed several short films before graduating from the Hochschule with a feature-length 16mm black and white film, Summer in the City.

Wenders began his career during the New German Cinema era of the late 1960s, making his feature directorial debut with Summer in the City (1970). Much of the distinctive cinematography in his movies is the result of a highly productive long-term collaboration with Dutch cinematographer Robby Müller. Some of his more successful and critically acclaimed movies—Paris, Texas and Wings of Desire, for example—have been the result of fruitful collaborations with avant-garde authors Peter Handke and Sam Shepard. Handke's novel, The Goalie's Anxiety at the Penalty Kick was adapted for Wenders' second feature film, The Goalkeeper's Fear of the Penalty. Handke co-wrote the script for Wings of Desire and Until the End of the World, both featuring Solveig Dommartin.

Wenders with Carrie Fisher in 1978

Wenders has directed several highly acclaimed documentaries, most notably Buena Vista Social Club (1999), about Cuban musicians, and The Soul of a Man (2003), on American blues. He has also directed a documentary style film on the Skladanowsky brothers, known in English as A Trick of the Light.[4] The Skladanowsky brothers were inventing 'moving pictures' when several others like the Lumière brothers and William Friese-Greene were doing the same. Alongside Buena Vista Social Club also his documentaries on Pina Bausch, Pina, and Sebastiao Salgado, The Salt of the Earth, got him a nomination for an Academy Award for Best Documentary Feature.

He has also directed many music videos for groups such as U2 and Talking Heads, including "Stay (Faraway, So Close!)" and "Sax and Violins". His television commercials include a UK advertisement for Carling Premier Canadian beer.

Wenders was collaborating with artist/journalist and longtime friend Melinda Camber Porter on a documentary feature about his body of work, Wim Wenders - Visions on Film, when Porter died - the film remains incomplete.[5]

Wenders is a member of the advisory board of World Cinema Foundation. The project was founded by Martin Scorsese and aimed at finding and reconstructing world cinema films that have been long neglected. He serves as a Jury Member for the digital studio Filmaka, a platform for undiscovered filmmakers to show their work to industry professionals.[6]

In 2011 he was selected to stage the 2013 cycle of Richard Wagner's Der Ring des Nibelungen at the Bayreuth Festival,[7] a reflection of his capacity to produce imaginative tributes to great works of art.[8] The project fell through when he insisted on filming in 3-D, which the Wagner family found too costly and disruptive.[9]

While promoting his 3-D dance film, Pina, Wenders told the Documentary channel Blog in December 2011 that he has already begun work on a new 3-D documentary, this one about architecture.[10] He also has said that he will only be working in the 3-D film format from now on.[11] Wenders admired the dance choreographer Pina Bausch since 1985, but only with the advent of digital 3-D cinema did he decide that he could sufficiently capture her work on screen.[12]

In an interview with Christiane Amanpour in May 2018, Wim indicated that his favorite movie of all time, was his movie about Pope Francis, that his entire career had been building up to it. His admiration for the Pope is profound, as he feels that the Pope is doing his best, in a difficult time, in a world full of calamities. When questioned by Amanpour, he indicated that he was born a Catholic but had converted to the Protestant faith, years ago.

Alongside filmmaking, Wim Wenders works with the medium of photography and his poignant images of desolate landscapes engage themes including memory, time, loss, nostalgia and movement.[1][2] Wenders' long-running artistic project, "Pictures from the Surface of the Earth", began in the early 1980s and was subsequently pursued by the artist for the next twenty years. The initial photographic series in this body of work was titled "Written in the West" which Wenders produced when criss-crossing through the American West in preparation for his film Paris, Texas (1984). This became the starting point for the artist's nomadic journey across the globe, travelling through countries including Germany, Australia, Cuba, Israel and Japan to take photographs which capture the essence of a moment, place or space.[13]

2016
"The Space Between the Characters Can Carry the Load", Collection Ivo Wessel, Weserburg Museum for modern Art, Bremen, DE

Wenders has already received many awards, including the Golden Lion for The State of Things at the Venice Film Festival (1982); the Palme d'Or at the 1984 Cannes Film Festival for his movie Paris, Texas; and Best Direction for Wings of Desire in the 1987 Bavarian Film Awards[17] and the 1987 Cannes Film Festival. In 1993 he won the Bavarian Film Awards for Best Director for Faraway, So Close!.[17] In 2004, he received the Master of Cinema Award of the International Filmfestival Mannheim-Heidelberg. He was awarded the Leopard of Honour at the Locarno International Film Festival in 2005. In 2012, his dance film Pina was nominated for the Best Documentary Feature of the 84th Academy Awards.[18]

He has been awarded honorary doctorates at the Sorbonne in Paris in 1989, at the University of Fribourg (Switzerland) in 1995 and at the Université Catholique de Louvain, Belgium in 2005.

In 2012 the Wim Wenders Foundation was created in Düsseldorf creating a framework to bring together the cinematic, photographic, artistic and literary lifework of Wim Wenders in his native country and to make it permanently accessible to the general public worldwide.[19]

He was presented with the Honorary Golden Bear at the 65th Berlin International Film Festival in February 2015.[20] In 2016, Wenders received the Großer Kulturpreis of the Sparkassen Culture-Foundation Rhineland, one of the highest endowed cultural honorings in Germany, with previous winners such as photographer legend Hilla Becher, sculptor Tony Cragg, musician Wolfgang Niedecken and director Sönke Wortmann. In 2017, Wenders received the Douglas Sirk Award at the Hamburg Film Festival.[21]