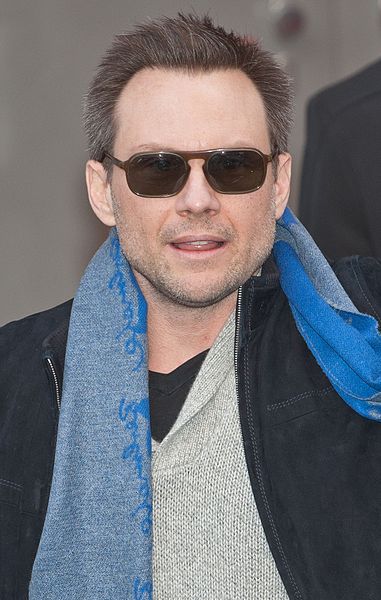 Christian Michael Leonard Slater (born August 18, 1969) is an American actor and producer. He made his film debut with a leading role in The Legend of Billie Jean (1985) and gained wider recognition for his breakthrough role as Jason “J.D.” Dean, a sociopathic high school student, in the satire Heathers (1988). In the 1990s, Slater starred in many big budget films, including Robin Hood: Prince of Thieves (1991), Interview with the Vampire (1994), FernGully: The Last Rainforest (1992), Broken Arrow (1996), and Hard Rain (1998) as well as cult films like Pump Up the Volume (1990) and True Romance (1992). Since 2000, Slater has combined work in the film business with television, including appearances in The West Wing and Alias and starring in Breaking In and Mind Games.

Slater currently has the titular role in the USA Network TV series Mr. Robot (2015-), for which he earned the Golden Globe Award for Best Supporting Actor - Series, Miniseries or Television Film in 2016, with additional nominations in 2017 and 2018.[1]

Slater's first television role was on the ABC soap opera One Life to Live when he was 8 years old.[6] Following a run on Ryan's Hope, he made his Broadway debut as the lisping Winthrop Paroo opposite Dick Van Dyke in the 1980 revival of The Music Man.[2] Additional Broadway credits include Copperfield, Merlin, Macbeth, Side Man, and The Glass Menagerie. In addition he has performed in London's West End in One Flew Over the Cuckoo's Nest and Swimming With Sharks.

Slater made his big screen debut in 1985's The Legend of Billie Jean playing Billie Jean’s brother Binx. Though expected to be a big hit, the film fell short at the box office, despite gaining a cult following. His career improved with his role in The Name of the Rose (1986) alongside Sean Connery.[7] Slater played Connery's apprentice monk while they investigated a series of murders at a Benedictine abbey. Slater followed this by playing Junior Tucker in Francis Ford Coppola's Tucker: The Man and His Dream (1988), Gleaming the Cube (1989) and Beyond the Stars (1989).

Slater's career rose to new heights when he played the dark character J.D. in the 1989 film Heathers alongside Winona Ryder. Heathers was billed as the teen film of 1989, which had turned into a hit musical in 2014. Slater beat out many other actors such as Brad Pitt for the part and his performance drew comparison with a young Jack Nicholson.[7] After Heathers, Slater had offers to play more troubled youths, including as a rebellious teen in Pump Up the Volume (1990) and a wild gunman in Young Guns II (1990), in which Slater acted alongside Emilio Estevez and Kiefer Sutherland.

In 1991, Slater was cast as Will Scarlett in the Hollywood big budget production of Robin Hood: Prince of Thieves alongside Kevin Costner, Morgan Freeman and Alan Rickman. The film was a commercial success, taking US$390 million worldwide, and Slater became one of the major A-list stars of the 1990s.[8] With Slater being a big Star Trek fan, he accepted a minor role in Star Trek VI: The Undiscovered Country, shortly after playing Charlie Luciano in the crime drama Mobsters.[7] The following year he starred in Kuffs.

In 1993, Slater tried to expand his film genre, playing opposite Marisa Tomei in Untamed Heart and playing Clarence Worley in the Quentin Tarantino-penned cult classic True Romance, which received many rave reviews.[7] In his review of True Romance Roger Ebert awarded the movie 3 stars out of 4 and commented, 'the energy and style of the movie are exhilarating. Christian Slater has the kind of cocky recklessness the movie needs.'[9]

The part as the interviewer in Interview with the Vampire (1994) came about after his friend River Phoenix, who originally had the role, died.[7] Slater subsequently donated his earnings from the film to Phoenix's favorite charities.[7] Slater also played the character of Lewis in the romance film Bed of Roses in 1996 along with Mary Stuart Masterson. Slater played Riley Hale in the big budget John Woo film Broken Arrow (1996), which also starred John Travolta, before appearing in 1998 in Hard Rain alongside Morgan Freeman. The same year he also starred in the comedy Very Bad Things opposite Cameron Diaz.

Since 2000 Slater has mixed TV work with leading roles in mainly lower budget films along with supporting roles in a few mainstream productions, appearing in the successful The West Wing and Alias TV productions, but also being part of Hollywood films, including Bobby and 3000 Miles to Graceland.[7] He has also worked as a voice-over artist in productions, including the character of 'Pips' in the successful Australian animated film FernGully: The Last Rainforest, The Adventures of Jimmy Neutron: Boy Genius and TV documentaries, including Prehistoric Planet and Dinosaur Planet. Slater also voiced the character John Watson a.k.a. "Wonko the Sane" in BBC Radio 4's production of The Hitchhiker's Guide to the Galaxy.[10] Slater starred in the television series My Own Worst Enemy in 2008 and The Forgotten in 2009.

Slater is reportedly developing and making a film based on Will Viharo's 1993 neo-noir novel Love Stories Are Too Violent for Me,[13] the first of three works to feature PI Vic Valentine.

Recently, he has received acclaim for his role in the television series on USA Network called Mr. Robot. Slater plays a computer hacker, "Mr. Robot," who recruits Rami Malek's character, 'Elliot," into Slater's band of hackers called fsociety. The series premiered on June 24, 2015. It has been picked up for a third season. [14]

Slater also provided the voice of Ushari the Egyptian Cobra in The Lion Guard the mid-sequel of The Lion King II: Simba's Pride.

He also made a short film for HP called The Wolf which shows how easy malware can spread on unprotected printers and computers.[15]

In 2018, Christian Slater appeared in the latest film by Emilio Estevez, The Public. At the world premiere of the film at the Toronto Film Festival, Christian Slater told Ikon London Magazine about his character: "He (Josh Davis) is definitely the character in the movie who represents that side of politics where he is not as open-hearted as you’d like him to be. He is definitely the guy who feels “this is all a mess.” And he is a law and order politician in this movie. So hopefully, he is the kind of guy you love to hate.” [16]

In 2000, Slater married Ryan Haddon, the daughter of 1970s model Dayle Haddon. They have two children, Jaden Christopher (born 1999) and Eliana Sophia (born 2001).[7] In 2003, Haddon was arrested for assaulting Slater at a Hard Rock Cafe while on a trip to Las Vegas.[17] Haddon allegedly threw a glass and gashed Slater's neck open for which he required 20 stitches. Haddon was charged with domestic battery, booked at Las Vegas' Clark County Detention Center, and freed after posting a bond.[17][18] They announced a separation over Christmas 2004 while Slater was performing in a stage version of the film One Flew Over the Cuckoo's Nest in London's West End. They officially separated in 2005 and divorced in 2007.[19]

Slater was once quoted as saying "Work is my hobby, staying sober is my job."[20] Slater is a practitioner in Kempo Karate.[21]

On December 2, 2013, Slater married his girlfriend Brittany Lopez in Florida after three years of dating.[22][23]

In 1994, he was arrested when he tried to board a commercial plane with a gun in his luggage.[24] He was sentenced to community service.[25]

In 1997, Slater was convicted of assaulting his then-girlfriend, Michelle Jonas, and a police officer while under the influence of drugs and alcohol.[7][24] He spent over 100 days in a rehabilitation facility while out on bail and then was sentenced to a three-month term in jail followed by three months in a residential rehab center.[4]

On May 24, 2005, Slater was arrested in Manhattan, New York, after he allegedly sexually harassed a woman on the street.[26] A video of Slater being arrested was recorded and shown on television. Slater was charged with third degree sexual abuse and was held at the 19th precinct in Manhattan.[26][27] The charges were later dropped on the condition that Slater keep out of trouble for six months.[28]

Slater has been a supporter of several charities, including 21st Century Leaders, Global Green and Whatever It Takes.[29] Slater appeared in an educational video on behalf of Nelson Mandela’s 46664 charity for AIDS awareness.[30]

He has also worked to promote humanitarian work in South Africa.[31]

In 1994, Slater donated his earnings from the film Interview with the Vampire to River Phoenix’s favorite charities.[2] Slater had taken a role in the film planned to be filled by Phoenix after the latter died in 1993. In early May 2009, Slater visited wounded and recovering soldiers of Walter Reed Army Medical Center for the USO.[2] On December 10, 2009, Slater visited Hattiesburg, Mississippi, where he contributed work for the television show Extreme Makeover: Home Edition. The episode aired on March 21, 2010.[32]

Report a problem
Write to Christian Slater at FanPal • 2022