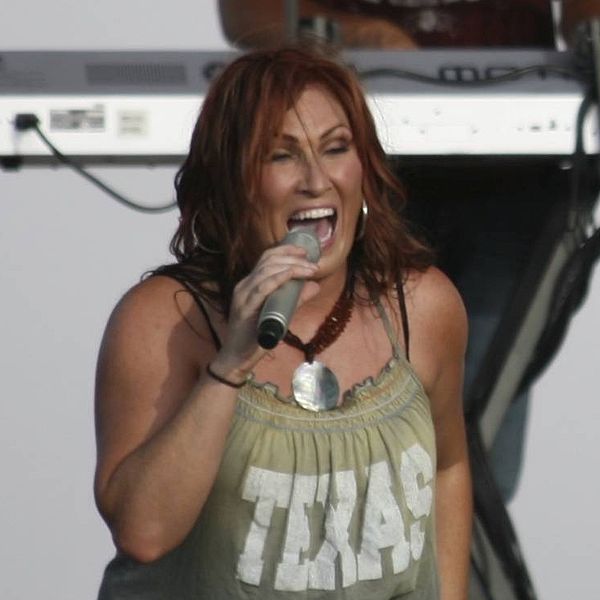 Jo Dee Marie Messina (born August 25, 1970) is an American country music artist. She has charted six number one singles on the Billboard country music charts. She has been honored by the Country Music Association, the Academy of Country Music and has been nominated for two Grammy Awards. She was the first female country artist to score three multiple-week Number One songs from the same album.[1] To date, she has two Platinum and three Gold-certified albums by the RIAA.

Messina debuted in 1996 with the single Heads Carolina, Tails California. Her album was certified Gold by the RIAA. Her second album, I'm Alright, produced five Top 10 Country hits between 1998 and 1999, and sold over a million copies in America. Since her debut, six of her singles have peaked at No. 1 on the Billboard Country singles chart and five of her albums have received a certification by the RIAA or the CRIA. She has sold over 5 million records worldwide.

Messina was born Jo Dee Marie Messina on August 25, 1970, in Framingham, Massachusetts, to Vincent and Mary Messina. Her father, of Italian descent, and mother, of Irish descent, raised her in Holliston, Massachusetts, alongside sisters, Terese and Marianne, and a brother, Vincent.[2] At an early age, Messina's love for music blossomed. She drew influence from a variety of country music artists, including Patsy Cline, Reba McEntire, and The Judds. By age 16 she was playing local clubs, singing while her brother and sister provided backup on drums and guitar.[3] The group continued performing until Jo Dee graduated from high school.

Realizing that living in the Northeast would limit her chances of achieving country music stardom, Messina moved to Nashville, Tennessee, at age 19.[4] She worked various temp jobs, including computer programming and accounting, while entering talent contests around Nashville.

One win led to a regular gig on the radio show Live at Libby's, which caught the interest of producer Byron Gallimore, who helped her assemble a demonstration tape. Gallimore was also working with the young Tim McGraw around the same time, and Messina befriended him. Backstage at one of his concerts, McGraw met an executive from his label, Curb Records, and jokingly suggested that they needed a redhead.[3] With the help of fellow Curb producer James Stroud, Messina was soon signed to the record label. Gallimore and McGraw would later become co-producers of Messina's studio albums for Curb.

Messina released her self-titled debut album in 1996. It spawned two Top 10 hits, starting with the lead single, "Heads Carolina, Tails California," which peaked at No. 2 on the Country charts and its follow-up, "You're Not in Kansas Anymore" gained similar success.[3] However, the two additional singles released from the album, "Do You Wanna Make Something of It" and "He'd Never Seen Julie Cry" peaked outside the Country Top 40 and were minor hits between 1996 and 1997. Following her major success, Messina performed 215 shows in 1996 and became one of the most successful new female vocalists of the 1990s. debut album sold over 500,000 copies and was certified Gold by RIAA.

Messina's finances suffered due to a series of poor business decisions and a change of management that led her to nearly declaring bankruptcy; she nearly lost her home and her car.[2] She spent nearly a year trying to write new songs and material for a new album that could help bring herself out of bankruptcy.[5] She credited the radio success of "Bye, Bye" and "I'm Alright" with giving her a "second chance."[6]

In 2000 Messina received the Country Music Association's "Horizon award," which is awarded to new Country music artists.[7] She also won Billboard magazine's "Most Played Female at Country Radio", and won three major awards from the Boston Music Awards, located in her home state of Massachusetts.[4]

Messina's album also became her biggest-selling album to date, selling over two million copies in the US, receiving an RIAA certification of 2XPlatinum. Around the same time, Messina had guest roles on the television shows, Crash and Burn, Nash Bridges and Touched by an Angel. She guest-starred on the series a couple of years earlier and stayed in touch with the show's producer/creator. In the episode titled "Bring On the Rain" (named after Messina's hit song), she appeared as Annie, the single mother of a teenage girl.[4]

She released her third studio album, Burn in 2000, which aimed towards Country pop-styled music.[3] The album's lead single, "That's the Way" peaked at No. 1 on the Billboard Country Chart and also became her highest-charting single on the Billboard Hot 100, peaking at No. 25. Following that success, she had two additional Top 10 hits with "Burn" and "Downtime".[7]

Messina had another No. 1 hit from the album in 2001 with "Bring On the Rain," a duet with Tim McGraw that also became a Top 10 hit on the Adult Contemporary Chart, peaking at No. 6.

In addition to headlining concerts, she also toured with Vince Gill, George Strait, and The Judds' reunion tour.[8]

Messina released her first holiday album in 2002 with A Joyful Noise. The title track was released as a single and peaked at No. 16 on the Adult Contemporary chart in 2003. The album consisted of remakes of holiday songs previously made famous by other singers.

Messina planned to release a new album in 2003, but a Greatest Hits album was released instead due to delays.[8] The album covered most of Messina's hits between 1996 and 2003, and also included four new songs, including two that were released as singles. The first single, "Was That My Life," peaked in the Top 25 and the second single, "I Wish," became a Top 15 hit. The album was also certified Gold by RIAA.

Messina released a new single in July 2007, "Biker Chick," from her upcoming fifth studio album, Unmistakable. It was written by Kelly Archer and Max T. Barnes and was recorded in the fall of 2006 in Nashville.[11] Although the album was set for release on November 6, 2007, the album was shelved and therefore, the single was dropped from Country radio after spending 9 weeks on the charts, rising to a peak of No. 48.

On March 22, 2008, Messina released her second single from Unmistakable, titled "I'm Done." The single peaked at No. 34 on the Billboard Country Chart. Messina, who co-wrote the song, explained that the release of the album was "truly dictated by the success of the single."[12] On June 10, 2008, Messina and Phil Vassar opened the 2008 CMA Music Festival, where she performed her two No. 1 hits, Bye, Bye and I'm Alright, both co-written by Vassar.[13] She also performed her latest single, "I'm Done," which received a positive reaction from the audience that day.[14] In early 2009 she released Shine, but at the last minute her record label decided not to release it, and the album was pushed again.

In January 2010, Messina released the single, "That's God,"[15] although it failed to chart. Messina began debuting the single in late 2009 on her Music Room Series Tour. "My heart is exploding with excitement. This song is truly what I want to say. I believe in it and its message."[16] Having had her first child in January 2009,[17] Messina was inspired to write the song while spending time with her son on a trip to Jasper, Canada, where she saw mountains with glacier lakes.[18] The single received a negative review at Engine 145, where critic Sam Gadzidak thought that it was derivative of Lee Ann Womack's "There Is a God."[19]

She later announced that the album would be released in a trilogy of extended plays, beginning with Unmistakable: Love, released on April 27, 2010. It was followed by two additional extended plays, Drive and Inspiration, both released on November 9, 2010, via MP3 format.

In 2011, Jo Dee Messina signed up to promote the WD-40 line of cleaners with a campaign called "Unmistakably Clean". A collection of her songs is available for free download with the purchase of specially marked Spot Shot, Carpet Fresh, 2000 Flushes or X-14.[20]

In 2012, Messina was featured on the fourth season of Bravo's hit reality show The Real Housewives of Atlanta. On the show, Messina and cast member Kandi Burruss collaboratively wrote a song together; Burruss' first effort at creating country music.

In December 2012, Messina completed her seventeen-year contract with Curb Records.

In May 2013, Messina started a Kickstarter campaign to fund her next album. The lead single, "Peace Sign", was released on August 23, 2013 via Dreambound Records. The full-length album, Me, was released on March 18, 2014, featuring twelve new songs. "A Woman's Rant" and "He's Messed Up" were released in 2014 as the second and third singles from the album, respectively, and Messina embarked on the Me Tour in support of the album in October 2014.

Messina has been performing new self-penned songs "Will You Love Me" and "Masquerade" at shows since 2015.[21] While Messina anticipated that they would be a part of a new EP, entitled Masquerade, she has since reassessed the direction of her music and is continuing to write new material, mostly faith-based in an effort to share God's word, for an eventual project.[22]

In September 2018, Messina announced that she'd covered Cory Asbury's "Reckless Love" and released it as her first new single to country radio in four years.[23]

Messina became involved with the Special Olympics after stumbling across an event while jogging. She has become an ambassador and performs at Special Olympics events in order to increase attendance.[24]

In 2004, Messina was engaged to road manager Don Muzquiz, but then broke off the engagement. However, the two remained in a business relationship.[25] On June 22, 2007, Messina announced her engagement to businessman Chris Deffenbaugh from Albuquerque, New Mexico.[26] They were married in Nashville in late 2007.[27] A son, Noah Roger Deffenbaugh was born on January 19, 2009.[28] On January 11, 2012, they welcomed son Jonah Christopher Deffenbaugh.[29]

On September 6, 2017, Jo Dee Messina's team revealed she had been diagnosed with an unspecified cancer. All 2017 tour dates after October 7 were postponed as she underwent treatments in the fall. An April 19, 2018, website update said she was "on the comeback trail from cancer" and was scheduled to perform again in July. On April 20, 2018, she revealed in a YouTube update that she had been raising her sons "by herself," but a June 29, 2018, article in the Albuquerque Journal indicates Messina and Deffenbaugh are married.[30]