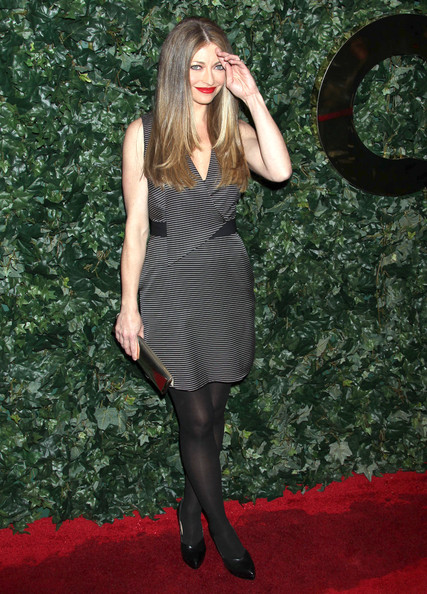 Rebecca Gayheart (born August 12, 1971)[1] is an American fashion model and television and film actress. Gayheart began her career appearing in a student short film by Brett Ratner, and later gained notice as a spokesperson and model for Noxzema in the early 1990s. She had minor roles in Nothing to Lose and Scream 2 (1997) before starring in the slasher film Urban Legend (1998) and the black comedy Jawbreaker (1999). She has also had roles on the television series Dead Like Me, Vanished, and Nip/Tuck.

Gayheart was born in Hazard, Kentucky, the daughter of Floneva (née Slone), who worked as a Mary Kay independent beauty consultant, and Curtis Gayheart, a miner and coal-truck driver.[2][3][4] She is of Irish, Italian, and German descent.[5] Gayheart spent her early life in Pine Top, Kentucky.[6] She relocated to New York City at the age of 15, where she completed her education at New York's Professional Children's School and the Lee Strasberg Institute.
Read more...

Gayheart's break into the television industry was a series of television commercials for Noxzema in the early 1990s, earning her the moniker "The Noxzema Girl". The commercials began airing in 1991 and brought her recognition.[7] (This was also referred to at the end of the film Urban Legend, when one of the new college students remarks, "And Brenda was the Noxzema Girl.")

In 1992, Gayheart was cast in her first major role on the soap opera Loving as Hannah Mayberry. In 1993 and 1994, she had a recurring role in the Vanishing Son action series as cellist Clair Rutledge, the love interest of Russell Wong's main character, Jian-Wa Chang. In 1994 and 1995, Gayheart played Bess Martin in the science-fiction series Earth 2. In 1995, she played Antonia Marchette, a recurring character in the series Beverly Hills, 90210, and Luke Perry's character's love interest.

Gayheart was a regular on the short-lived 1999 television series Wasteland, Dead Like Me, and Vanished, and had a recurring role on Nip/Tuck. In 1999, Gayheart also starred in the movie Jawbreaker with Rose McGowan, Julie Benz, and Judy Greer as girls in an exclusive clique in their high school.

Gayheart starred as the waitress in the Train music video for the 1999 song "Meet Virginia".

In 2002, Gayheart was hired for the role of Inara Serra on the television series Firefly but was fired after only one day of filming. Show creator Joss Whedon said that a lack of chemistry existed between the rest of the cast and her.[citation needed] The role was recast with actress Morena Baccarin, who reportedly filmed her first scene the day she was accepted for the role.[8] None of Gayheart's work was used.[9]

In 2007, Gayheart guest-starred on Ugly Betty as Jordan, an ex-girlfriend of Alexis Meade. The following year, Gayheart starred in the Broadway comedy, Boeing-Boeing opposite Christine Baranski, Mark Rylance, Greg Germann, Paige Davis, and Missi Pyle.[10] She had a guest role on The Cleaner in 2009.

Gayheart was engaged to director Brett Ratner, [3] and to Italian actor Marco Leonardi.

In February 2018, Gayheart filed for divorce from Dane after 14 years of marriage, citing "irreconcilable differences".[17]

On June 13, 2001 while driving a vehicle, Gayheart hit nine-year-old Jorge Cruz, Jr., as he walked across a street in Los Angeles. He died the following day from his injuries. On November 27, 2001, Gayheart pleaded no contest to vehicular manslaughter. She was sentenced to three years of probation, a one-year suspension of her license, a $2,800 fine, and 750 hours of community service.[3][18] The parents of the boy filed a wrongful death lawsuit, which was settled out of court.[19]