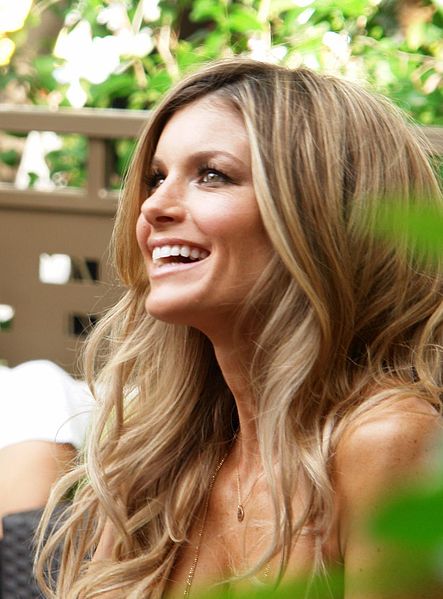 Marisa Lee Miller (née Bertetta; born August 6, 1978)[1][2] is an American model and actress best known for her appearances in the Sports Illustrated Swimsuit Issue and her work for Victoria's Secret. After a stint shooting with photographer Mario Testino for fashion magazines such as Vogue,[3] Miller began working for both companies in 2002. In 2007, she became a Victoria's Secret Angel, and appeared on the cover of the 2008 Sports Illustrated Swimsuit Issue to record-setting numbers.[4] Her accomplishments have led to her being dubbed the "return of the great American supermodel."[5]

She is known for contracts with companies such as Harley-Davidson, for whom she is the first spokesperson in the history of the company, and the NFL, for whom she became a spokesperson in 2010.[6] Miller is considered a sex symbol;[6] she ranked No. 1 on Maxim magazine's 2008 "Hot 100" list[5] and in FHM's global 2010 "Sexiest Women in the World" poll.[7] Aside from modeling, she was an ambassador for both the American Cancer Society[8] and the USO.[9] Miller made her film debut in R.I.P.D. (2013).

Miller was born as Marisa Lee Bertetta in Santa Cruz, California, to Krista (née Useldinger) and Marc Bertetta.,[10][11] who lived of a truck during the first 6 months when they were married.[12] She has 2 younger sisters.[12] Miller attended high school at Aptos High[13] and Monte Vista Christian School.[10] She considered herself a tomboy growing up, with mostly male friends and little awareness of anything girly.[14]
Read more...

Miller backstage at the Fashion for Relief show, a charity event in aid of victims of Hurricane Katrina

Miller moved from a start as an amateur magazine model to high-profile mainstream work after an acquaintance showed a picture of her to famed fashion photographer Mario Testino in 2001. Testino asked to meet Miller, who was running a surf school at the time, and was invited to Manhattan Beach, California, where she would be surfing.[3] Noticing her, Testino snapped pictures of her and approached her with a job offer of editorials for both the American and Italian editions of Vogue. Within six months,[3] Miller was working for Victoria's Secret and the coveted Sports Illustrated Swimsuit Issue, in which she appeared in every issue from 2002 to 2008. In particular, she famously posed wearing only an iPod in the 2007 issue.[15] Miller was first "discovered" at age sixteen walking through a San Francisco café by two Italian modeling agents.[10] After talking to her mother, she was on a plane to Italy with her mother a few months later, despite her "shy and conservative" personality.[3] Miller gained attention in 1997 when she appeared nude in the first issue of Perfect 10 magazine. Although she came in third behind Ashley Degenford and Monica Hansen in Perfect 10 magazine's first annual model search,[2] she was repeatedly showcased in following issues, including the covers of the Winter 1998 and August/September 1999 editions. Unlike most models who begin their careers with nude photo shoots, Marisa was able to make the jump to mainstream modelling as well as a reprint for the Fall 2004 edition cover.[16][17]

She has appeared in a diverse range of magazines, many of them international editions, such as GQ, Maxim, Glamour, Cosmopolitan, Marie Claire, Elle, and Vanity Fair.[18] She has appeared in advertisements for Marc Jacobs, Tommy Hilfiger, Andrew Marc, Victoria's Secret, J.Crew, Guess?, Nordstrom, Bath & Body Works, and True Religion jeans.[18]

It was not until 2007 that she filmed her first television commercial for Victoria's Secret, appearing alongside Heidi Klum for the It bra.[19] On December 4, 2007, Miller made her debut in the Victoria's Secret Fashion Show,[1] and opened a segment in the following year's edition. Other runway work include 2007's Fashion for Relief show, benefiting victims of Hurricane Katrina,[1] as well as MTV's Fashionably Loud, Imitation of Christ, Inca, and Amir Slama's Rosa Cha, for which she was one of the most anticipated models.[20] In the February 12, 2008, episode of the Late Show with David Letterman, it was revealed via a three-story billboard in New York City that Miller would occupy the cover of that year's Sports Illustrated Swimsuit Issue. The tandem online launch of the issue drew record page views to the SI website: 228 million, a 41% increase over 2007.[4] In September 2008, Sports Illustrated released a "Best of Marisa Miller" swimsuit calendar for the 2009 year.[1]

Victoria's Secret put her to work in 2008, with a five-city tour to promote the 2008 Swim collection's release in stores; the April-May tour included stops in New York City, Miami, Chicago (where she threw the opening pitch at a Chicago Cubs baseball game), Boston, and Minneapolis. The relaunch of Victoria Secret's sports line, VSX, soon followed, along with her first official campaign as an Angel:[21] promoting the company's fragrance Very Sexy Dare. For the 2009 Victoria's Secret Fashion Show, Miller was chosen to wear the year's "Fantasy Bra," a harlequin design featuring 2,300 white, champagne, and cognac diamonds, and a 16-carat heart-shaped brown-yellow diamond pendant for a $3-million value and 150 total carats.[22][23] In response to claims that Miller had parted with Victoria's Secret in January 2010, the Chief Marketing Officer for Limited Brands responded, saying the claims were "unfounded and untrue" while adding "we adore Marisa and we will continue to work with her in the future."[24] In late 2010, Miller confirmed she had moved on from Angel status.[9]

In a July 2010 interview with Forbes, Miller stated that because the fashion industry had changed, with celebrities supplanting models on magazine covers and in campaigns, supermodels have to become brands to be successful.[6] For that reason, she shifted focus to consumer products reflective of her personality. In July 2008, Miller took her first step beyond modeling when her shoe line with skateboarder/surfer-oriented company Vans launched.[5] Miller starred in a 2008 viral video on YouTube with All Star baseball player Ryan Braun for Remington's ShortCut hair clippers[25]

In 2008, Miller became the first spokesperson in motorcycle manufacturer Harley-Davidson's one-hundred-year history.[6] She first partnered with Harley to launch the VRSCF V-Rod Muscle motorcycle and rejoined the company in November 2009 to act as the face of their first "Military Appreciation Month" campaign, featuring Miller as a classic pin-up in military-themed advertisements and online content.[26] 2010 found her again working for the company, this time for their "Start Something" campaign, encouraging dreamers to become new riders.[27] Miller represented the rum brand Captain Morgan as the company's "Official First Mate" in advertising, social responsibility communication, and event appearances, starting in 2010.[28]

In October 2010, the NFL announced Miller had been hired as a spokesperson for the 2010-2011 season, with duties including hosting the NFL International Series game between the San Francisco 49ers and Denver Broncos in London. The announcement drew accusations toward the league of sending a "mixed message" in hiring a well-known lingerie and swimsuit model on the heels of controversies over reporter Ines Sainz's treatment at the New York Jets' facilities and the messages and photos Brett Favre allegedly sent Jenn Sterger.[29] New York Times columnist William C. Rhoden noted that "Miller reveals a lot of flesh in the N.F.L. advertisements featuring her. This is Miller’s business, but it shouldn’t be the N.F.L.’s."[30] In 2010, she designed and released a paddle board line with Surftech aimed at female riders[31] and in 2012 she appeared in a beach-theme commercial for Buick.[32]

Miller's first work in television was as a judge on the Bravo reality series Manhunt: The Search for America's Most Gorgeous Male Model in 2004,[33] the same year she appeared in Puddle of Mudd's "Spin You Around" music video. 2007 brought appearances in the pilot episode and finale of the VH1 reality show The Shot and cameos in HBO's Entourage and the CBS comedy How I Met Your Mother,[34] the latter with her fellow Victoria's Secret Angels. In 2009, she had a guest judge role on an episode of America's Next Top Model and a minor role in an episode of Gary Unmarried; in 2010, she co-hosted an episode of GameTrailers TV with Geoff Keighley.[35] She has appeared in commercials for the NFL Network[36] and the California Travel and Tourism Commission's "Visit California" campaign. Miller's 2008 commercial for Activision's Guitar Hero: World Tour was deemed too sexy to air.[37][38]

The swell in publicity resulting from her 2008 work served to land Miller in the number one spot on Maxim magazine's "Hot 100" rankings for 2008, beating out list regulars such as Scarlett Johansson, Jessica Biel, and Eva Longoria. This marked the first time anyone has debuted on the list in the number one position.[5] In her subsequent cover story for the July issue, Maxim proclaimed her as the "return of the great American supermodel." Of such acclaim, Miller admits, "I get a kick out of it, but it would be stupid to let it go to my head. It’s modeling—I didn’t find the cure for cancer."[40] Miller continued to be highly rated and appeared on the list in 2009 in 18th place, and in 2010 in 10th place.[41]

In 2010, Miller came in third in FHM magazine's UK edition of the 16th annual "Sexiest Women in the World" poll, placing behind actress Megan Fox and winner, British singer Cheryl Cole.[49][50] Miller topped the poll in the US edition of FHM and was declared the global winner of the poll, receiving the most combined votes from FHM's 24 international editions.[7]

From an early age she loved surfing,[10] and her aunt was on the pro tour.[15] In 2004, she placed second in the celebrity division of the Kelly Slater Surf Invitational[1] and says of the sport, "I feel my absolute best—physically, mentally and spiritually—when I'm surfing every day."[14] She also won the most valuable player award at the 4th annual Celebrity Beach Bowl.[56] She was a standout volleyball player in high school[1] and has taken up boxing.[8][53] After signing with Harley-Davidson, Miller received her motorcycle license[57] and rides a Harley Nightster. She has said that she would like to be a sportscaster.[58] Miller comes from a family of nurses. Her mother returned to college to become a pediatrics nurse and her sisters are also nurses. She has expressed an interest in following the same career path if she stops modeling.[59][60]

As of 2009, Miller is an ambassador for the American Cancer Society.[8][62] Proceeds from her online store are donated to the charity. She also supports the Young Survival Coalition, which raises awareness of breast cancer in women under 40,[5] as well as environmental organization the Surfrider Foundation, which aims to preserve the world's oceans and beaches.[62] In October 2009, Miller hosted the Monte Foundation music festival, an annual fundraiser for schools in the Aptos area, where she and Guess own a home.[15] She is also an ambassador for the USO; she visits military bases and receives frequent fan mail from American troops worldwide.[9]

In 2015, she participated in a PETA Campaign against SeaWorld, posing naked while pregnant with her second child.[63]