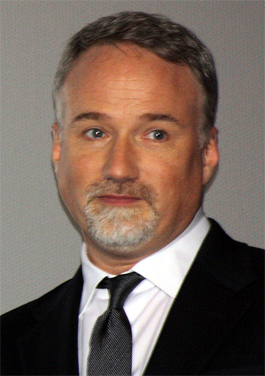 His films Zodiac and The Social Network are ranked in BBC's 100 Greatest Films of the 21st Century.[3]

Fincher was born on August 28, 1962 in Denver, Colorado,[4] the son of Claire Mae (née Boettcher), a mental health nurse from South Dakota who worked in drug addiction programs, and Howard Kelly "Jack" Fincher, an author from Oklahoma who worked as a reporter and bureau chief for Life.[5][6] Howard died of cancer in April 2003.[1][7] Fincher knew from a young age he wanted to go into filmmaking. When Fincher was two years old, the family moved to San Anselmo, California, where filmmaker George Lucas was one of his neighbors.[6]

Fincher moved to Ashland, Oregon in his teens, where he graduated from Ashland High School. During high school, he directed plays and designed sets and lighting after school, and was a non-union projectionist at a second-run movie theater, production assistant at the local television news station KOBI in Medford, Oregon, and took on other odd jobs such as fry cook, busboy, and dishwasher.[6][8] Inspired by Butch Cassidy and the Sundance Kid (1969), Fincher began making movies at age eight with an 8mm camera.[6][4]

Fincher was employed at Korty Films as a production head. He then moved up the ranks and became a visual effects producer,[6] working on the animated Twice Upon a Time (1983). He was hired by Industrial Light & Magic in 1983 as an assistant cameraman and matte photographer,[6] and worked on Return of the Jedi (1983) and Indiana Jones and the Temple of Doom (1984).[9] In 1984, he left ILM to direct a commercial for the American Cancer Society that depicted a fetus smoking a cigarette.[6] This quickly brought Fincher to the attention of producers in Los Angeles, and he was given the chance to direct the 1985 Rick Springfield documentary The Beat of the Live Drum.[10] Set on a directing career, Fincher co-founded video-production company Propaganda Films and started off directing music videos and commercials.[10]

Like Fincher, directors such as Michael Bay, Antoine Fuqua, Michel Gondry, Spike Jonze, Alex Proyas, Paul Rachman, Mark Romanek, Zack Snyder, Gore Verbinski and others honed their talents at Propaganda Films before moving on to feature films.[11] Though he would continue to direct spots for Levi's, Converse, Nike, Pepsi, Revlon, Sony, Coca-Cola, Chanel, and other companies,[6] Fincher began to focus on music videos. He directed the video for 1986's "We Don't Have to Take Our Clothes Off", which was the biggest commercial success for pop/R&B singer Jermaine Stewart,[4] Michael Jackson's "Who Is It", and worked extensively with Madonna, directing videos for "Express Yourself", "Oh Father", "Vogue" and "Bad Girl".[10]

20th Century Fox hired Fincher to replace Vincent Ward as the director of the science fiction horror film Alien 3 (1992), his feature directorial debut.[12] The third installment in the Alien franchise starring Sigourney Weaver, the film was released in May 1992 to a mixed reception from critics and was considered weaker than the preceding films in the franchise.[13] Film critic Roger Ebert, considered it to be "one of the best looking bad movies he's ever seen".[14] Fincher became involved with several disputes with 20th Century Fox over script and budget issues during the production. In Director's Cut: Picturing Hollywood in the 21st Century, he blames the producers for not putting the necessary trust in him.[15] He stated in an interview with The Guardian in 2009: "No one hated it more than me; to this day, no one hates it more than me."[16] It received an Academy Award nomination for Best Visual Effects.[17]

After directing the film, he retreated back into the world of commercial and music video directing, including the video for the Grammy Award for Best Short Form Music Video-winning song "Love Is Strong" by The Rolling Stones in 1994.[18] Following the difficult production of Alien 3, Fincher thought that he would "rather die of colon cancer than do another movie" and eschewed reading scripts.[19] Despite this, Fincher read Andrew Kevin Walker's screenplay for Seven (1995), which was actually Walker's original draft with the current ending, that was already removed by then attached director Jeremiah Chechik. Fincher expressed no interest in directing after reading the revised draft, until New Line Cinema agreed to keep the original ending.[20][19] It stars Brad Pitt, Morgan Freeman, Gwyneth Paltrow, R. Lee Ermey, and Kevin Spacey, and tells the story of two detectives (played by Pitt and Freeman) tracking down a serial killer who bases his killings on the seven deadly sins.[21] Seven was one of the highest-earning films of 1995, grossing more than $320 million internationally and was positively received by film critics.[22] Writing for Sight and Sound, John Wrathall wrote that it "stands as the most complex and disturbing entry in the serial killer genre since Manhunter" and Roger Ebert opined that Seven is "one of the darkest and most merciless films ever made in the Hollywood mainstream."[23][24]

After the success of Seven, Fincher went on to film a music video for "6th Avenue Heartache" by The Wallflowers[25] and the thriller The Game (1997) from a screenplay by the screenwriting duo John Brancato and Michael Ferris.[26] The story focuses on a San Franciscan investment banker (played by Michael Douglas) who receives an unusual gift from his younger brother (Sean Penn), in which he becomes involved in a "game" that integrates in strange ways with his everyday life, leading to frustration and uncertainty between the game and real life.[26] Fincher hired Seven screenwriter Andrew Kevin Walker to make contributions and polishes to the script.[27] The film had middling box office returns, despite being met with generally positive reviews, with specific praise for Fincher's direction and Douglas' performance.[28]

In August 1997, Fincher agreed to direct a screen adaptation of Chuck Palahniuk's 1996 novel Fight Club for 20th Century Fox, his second film with the studio after the troubled production of Alien 3.[29] The film stars Edward Norton, Brad Pitt, and Helena Bonham Carter and follows an insomniac office worker who is known simply as The Narrator, played by Norton, who opens up a club devoted exclusively to bare knuckle fighting for men with soap salesman Tyler Durden (Pitt). Fight Club was an early disappointment at the box office and initially received mixed reviews. In the years following its release, Fight Club received a reassessment from many critics and is now considered one of the best films of the 1990s. Entertainment Weekly, which had originally given the film a D-,[30] later ranked the DVD #1 on its list of 50 Essential DVDs.[31] The film's social commentary has been the source of much critical analysis from academics and film critics.

In 2006, the British magazine Total Film voted Fight Club number four in the 100 Greatest Movies of All Time, beaten only by Jaws, Vertigo and Goodfellas at 3, 2 and 1 respectively.[32]

In 2002, Fincher followed up with the thriller Panic Room. The film earned over $92 million at the U.S. box office. The story follows a single mother (Jodie Foster) and her daughter (Kristen Stewart) as they hide in a safe room of their new house, away from criminals (Forest Whitaker, Dwight Yoakam, and Fight Club collaborator Jared Leto) bent on finding a missing fortune. Fincher acknowledged Panic Room as a more mainstream thriller, describing the film, on the DVD's audio commentary, as " a date movie" and a "really good B movie" about "two people trapped in a closet".

Five years after Panic Room, Fincher returned on March 2, 2007 with Zodiac, an adaptation of Robert Graysmith's books about the hunt for the Zodiac Killer that starred Jake Gyllenhaal, Mark Ruffalo, Robert Downey, Jr., Anthony Edwards, and Brian Cox. The first of Fincher's films to be shot digitally, the majority of the film was recorded on a Thomson Viper FilmStream HD digital movie camera . However, high-speed film cameras were used for the Blue Rock Springs and Presidio Heights murder scenes for the slow-motion shots.[33] It was originally to be released in the fall of 2006 but was pushed back after Fincher refused to cut 20 minutes off the film.

Zodiac was one of the best-reviewed films of that year, with only two other 2007 films appearing on more top-10 lists (No Country for Old Men and There Will Be Blood).[34] However, the film struggled at the box office in the U.S., earning only $33 million, but did well overseas with a foreign gross of $51.7 million. Worldwide, Zodiac was a decent success.[35] Despite an aggressive campaign by the studio, expectations surrounding Robert Downey, Jr.'s supporting performance, Fincher's direction and Vanderbilt's adapted script, the film did not earn a single Oscar nomination.[36]

A story about life and death, The Curious Case of Benjamin Button is an adaptation of F. Scott Fitzgerald's short story of the same name. The film was Fincher's third with Brad Pitt. The film started shooting in November 2006 in New Orleans, before moving on to the Virgin Islands, Montreal, and L.A. Both Zodiac and this film are co-productions of Paramount Pictures and Warner Bros. The budget for the film was estimated at $150 million, partly due to the visual effects used to reverse the aging in Pitt's character. It received 13 nominations at the 81st Academy Awards, including Fincher's first nomination for Best Director. It won three Academy Awards for Best Art Direction, Best Makeup, and Best Visual Effects.

2010s: The Social Network, The Girl with the Dragon Tattoo, Gone Girl and television career

Fincher directed the 2010 film The Social Network, about the legal battles of Mark Zuckerberg and the founding of Facebook. The film features an Oscar-winning screenplay by Aaron Sorkin, adapted from the book The Accidental Billionaires. Filming started in October 2009[37] and was released a year later, to critical acclaim. Trent Reznor and Atticus Ross created the Oscar-winning soundtrack for the film. The film went on to win many awards, including three Academy Awards for Best Adapted Screenplay, Best Original Score, and Best Film Editing.[38]

In 2011, Fincher directed the American version of The Girl with the Dragon Tattoo, based on the book by Stieg Larsson, with a script written by Steven Zaillian. The film was shot in Sweden, with Rooney Mara as Lisbeth Salander and Daniel Craig as Mikael Blomkvist. Trent Reznor and Atticus Ross composed the soundtrack for the film, collaborating with Fincher a second time.[39] The film received five Academy Award nominations, including Best Actress for Mara, and won the award for Best Film Editing.

Fincher is an executive producer of the Netflix television series House of Cards, of which he also directed the first two episodes.[40] The series has received positive reviews, earning nine Primetime Emmy nominations, including Outstanding Drama Series and winning Fincher the Primetime Emmy Award for Outstanding Directing for a Drama Series for the first episode.[41]

In 2016, Fincher directed another Netflix series, Mindhunter, starring Holt McCallany and Jonathan Groff. The series, that is based on the book Mind Hunter: Inside the FBI’s Elite Serial Crime Unit, debuted worldwide on October 13, 2017.[44][45]

Fincher likes to map out camera movements with computer-generated imagery, commission intricate sets, get heavily involved in post-production, and re-shoot footage after the principal photography has wrapped.[59] He does not normally use hand-held cameras when he shoots a film, preferring cameras on a tripod. His most frequent use of a hand-held camera was for Seven, in which five scenes were shot that way.

Fincher likes to confuse audiences with his camerawork. Sometimes, it is difficult to determine whether a shot is human-controlled, motion-controlled or computer-generated imagery. Close-ups are uncommon in Fincher's films, and he tries to move his cameras as little as possible. The interior of a refrigerator can be seen in a number of Fincher's films.[60]

In a Blu-ray bonus featurette of The Girl With the Dragon Tattoo, Fincher stated: "I think people are perverts. I've maintained that. That's the foundation of my career."[61]

His films Zodiac and The Social Network are ranked in the BBC's 100 Greatest Films of the 21st Century list.[103]

Report a problem
Write to David Fincher at FanPal • 2022