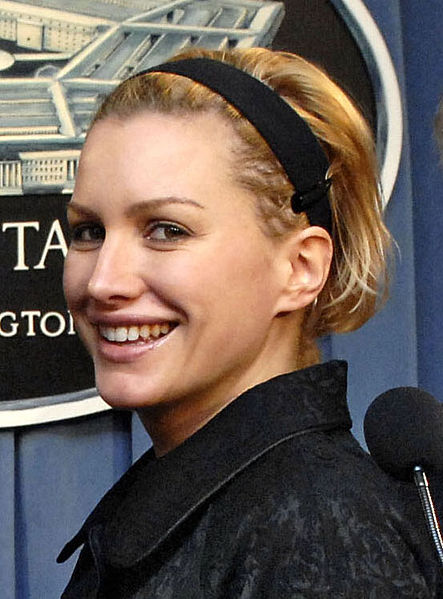 Evans, the daughter of educators and the granddaughter of a coal miner, was born in Bristol England to English parents, mathematician David Evans[3] and Janet Evans. She was raised in Bristol, England, along with her two British-born brothers, Anthony and Philip.[4] She graduated from University College London with a 2:1 in French and Italian.[4]
Read more...

After graduation, she moved to Paris' Cours Florent. She gained work in French television, with her breakthrough role as French student Susan in the popular French sitcom, Elisa Top Modele, which ran for 18 months. Next, she went to Italy to play "Nathalie", in the 1998 Italian miniseries Le ragazze di Piazza di Spagna. Her first English-speaking role was in the Highlander episode 'Patient Number 7'. After making her first film, Monsieur Naphtali (1999), Oscar-winning director Claude Lelouch cast Evans as Macha in Une pour toutes (1999), alongside Sami Naceri and Anne Parillaud.

In 1999, Disney cast Evans alongside Glenn Close, Gérard Depardieu and her future husband, Ioan Gruffudd, in 102 Dalmatians.[5][6] Evans' mother died at age 59, the day before Evans's final screen test for the role, which introduced her to British viewers.[7]

After appearing in Blackball, she moved to Los Angeles in 2003. She has since appeared in both television and film, such as The Mentalist, Brothers & Sisters, Lost, and Grimm. Evans also had a recurring turn as the villainous Esther on The Vampire Diaries[8] and The Originals.

Evans first met actor Ioan Gruffudd during the filming of 102 Dalmatians, while she was in her eight-year relationship with Olivier Widmaier Picasso, a grandson of painter Pablo Picasso. She lived with Picasso in Paris, and they became engaged but later broke up.[9]

Gruffudd stated on The Late Late Show with Craig Ferguson that he and Evans became engaged on New Year's Day 2006 after Evans gave him an ultimatum, declaring that after 7 years together she wasn't going to hang around any longer unless she was his wife.[10] They married on 14 September 2007 in Mexico.[11] The couple resides in Los Angeles, California, and has two daughters, Ella Betsi Janet (born 6 September 2009) and Elsie Marigold (born 13 September 2013). [12]