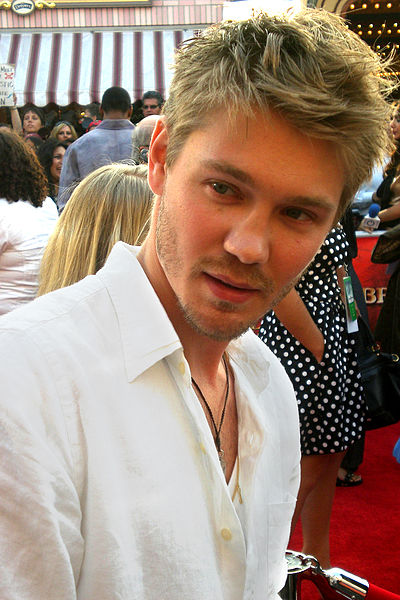 Chad Michael Murray (born August 24, 1981) is an American actor, spokesperson, writer and former fashion model. He is known for portraying Lucas Scott in The WB/CW drama series One Tree Hill from 2003 to 2009, and for his portrayal of war veteran and SSR agent Jack Thompson in the Marvel/ABC series Agent Carter. He has had starring roles in the films Freaky Friday (2003), A Cinderella Story (2004), and House of Wax (2005).

Popular among teenagers and young adults in the early 2000s, he has been featured on the covers of numerous magazines, including People, Vanity Fair and Entertainment Weekly.

Murray was born in Buffalo, New York to Rex Murray, an air traffic controller, and was abandoned by his mother at a young age. His abandonment issues were the main reasons he took the part of Lucas Scott.[1][2] He has three brothers, one sister, one half-brother, one step-sister, and one step-brother.[3]

Murray attended Clarence High School in Clarence, New York.[4] He became a fan of literature, and was heavily involved in playing football.[2] In his late teens, he broke his nose. This led to reports during his career that he had received a nose job. Murray clarified in a 2004 interview, "I got jumped in a Burger King when I was 18 and had my nose put on the other side of my face. It was three guys - what the hell was I supposed to do? The doctors didn't even bother running X-rays. They just reset it. But it wasn't a nose job - I hate the fact that people say it was a nose job!"[5]

In 1999, Murray moved to Hollywood where he supported himself modeling for such clients as Skechers, Tommy Hilfiger and Gucci. Then he was cast in the role of rich brat, Tristin DuGray on Gilmore Girls; which was one of the main characters in the first season of the series and then became a recurring character thereafter. He appeared in several guest starring television roles, including an episode of Undressed and an episode of Diagnosis: Murder. Murray portrayed the role Charlie Todd on the successful television series Dawson's Creek in 2001. In 2003, he appeared in television film, Aftermath: A Long Way Home. Murray then appeared in the Walt Disney Pictures feature film, Freaky Friday alongside Lindsay Lohan and Jamie Lee Curtis. The film was a major box office success, earning a total of $110,222,438 in the United States alone. Critics were mostly positive in their reviews of the film, and the film garnered a "B" grade on Yahoo! Movies and an 88% "Certified Fresh" approval rating on Rotten Tomatoes. Murray also appeared in the television film The Lone Ranger where he portrayed the role of Luke Hartman.

Later in the year of 2003, Murray won the main role of Lucas Scott in the successful WB television series One Tree Hill. The series quickly became the channel's biggest hit with over 4.50 million viewers on the first season's finale. The series was The WB's most successful and top rated television program when it first aired in 2003 and continued receiving top ratings for The CW. The series also earned Murray numerous awards, including two Teen Choice Awards, and spawned a book series. After Murray gained mainstream fame and media exposure, he also became a spokesperson for several high-profile deals. He and his One Tree Hill co-stars were the official endorsers for MasterCard and K-Mart.[6] They endorsed Cingular Wireless and the Chevy Cobalt.[7]

At the 2007 Monte-Carlo Television Festival

Following Murray's starring role on One Tree Hill, he appeared on the cover of several mainstream magazines such as Rolling Stone and People. That same year, he was voted as one of "TV's Sexiest Guys" in People magazine.[8] In 2004, Murray starred in the romantic comedy A Cinderella Story with Hilary Duff. Though the reviews were mostly negative, the film went on to become a moderate box office success, earning $70.1 million worldwide.[9][10][11] The film led to 2005 Teen Choice Awards wins in several categories. Later that year, Murray appeared on the cover of Teen People magazine.[12]

In 2005, Murray starred in House of Wax. The film grossed $12 million in its first day. Though most film critics gave the film negative reviews, House of Wax earned over $70 million worldwide. The film led to Murray receiving the 2005 Teen Choice Awards win category for "Choice Movie Actor: Action/Adventure/Thriller".[13] He featured briefly in the Iraq War drama Home of the Brave alongside Samuel L. Jackson and Jessica Biel in 2006. In May 2009, The CW announced Murray would not be returning to One Tree Hill for its seventh season.[14] A video of Murray was recorded in which he was telling fans that they did not want him back because they wanted to save money. However, Mark Schwann said in an interview that he had been offered "great things" to return to the show.[15]

In 2010, Murray played Alicia Keys's love interest in her music video for "Un-Thinkable (I'm Ready)".[16][17] Then he played Ethan McAllister in Lifetime's TV movie Lies in Plain Sight. Murray also co-starred in Christmas Cupid with Ashley Benson and Christina Milian.[18] The film is an ABC Family Original Movie and is "about a comatose girl who visits her Christmas past, present, and future".[19]

In 2011, The CW announced he would return for a guest appearance as Lucas Scott in the final season of One Tree Hill.[20] The episode aired on February 22, 2012. In 2013, Murray appeared in Fruitvale Station, a film chronicling the last day of Oscar Grant, who was killed by a police officer at a BART station. The film won two major awards at the 2013 Sundance Film Festival.

In August 2014, he was cast in a featured role as Agent Jack Thompson for Marvel's television series Agent Carter, and has returned for the second season.[21][22]

Murray released a novel in September 2011, titled Everlast.[23] In 2017, he published American Drifter: An Exhilarating Tale of Love and Murder, which he coauthored with Heather Graham. The romantic-thriller was inspired by a dream.[24]

Murray became engaged to his One Tree Hill co-star Sophia Bush in May 2004,[25] and they married on April 16, 2005 in Santa Monica, California.[26] They announced their separation in September 2005, after five months of marriage.[27] In February 2006, Bush filed papers for an annulment, citing fraud.[28] Bush's petition was denied,[29] and she and Murray were instead granted a divorce in December 2006.[30]