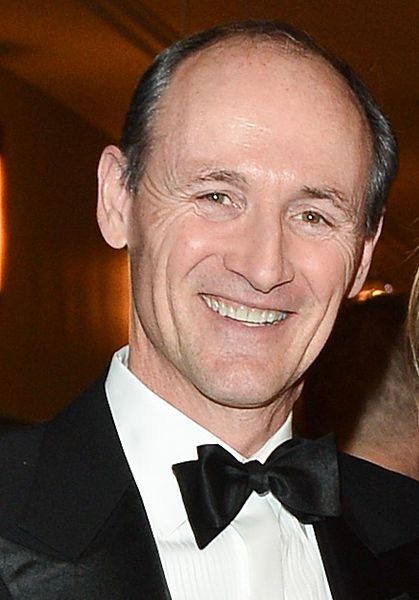 Colm Feore OC (born August 22, 1958), is an American-born Canadian stage, film and television actor.[1] A 13-year veteran of the Stratford Festival, he is best known for his Gemini-winning turn as Prime Minister Pierre Trudeau in the television miniseries Trudeau, as well as roles such as Detective Martin Ward in Bon Cop, Bad Cop, Lord Marshal Zhylaw in The Chronicles of Riddick, Pope Julius II on The Borgias, First Gentleman Henry Taylor on 24, General Ted Brockhart on House of Cards, and Declan Gallard on 21 Thunder. He is a Prix Iris and Screen Actors Guild Award winner and a Genie Award nominee.[2]

Feore was born in Boston, Massachusetts, to Irish parents who lived in Ireland for several years during his early life.[3] The family subsequently moved to Windsor, Ontario, where Feore grew up.[4]

After graduating from Ridley College in St. Catharines, Ontario, he attended the National Theatre School of Canada in Montreal, Quebec.[5][6]

Feore honed his acting skills as a member of the Acting Company of the Stratford Festival of Canada, North America's largest classical repertory theatre. He spent 16 seasons at Stratford where he rose from bit parts to leading roles, including Romeo,[7] Hamlet,[7] Richard III,[7] and Cyrano.[7] He returned in 2006 to star in four productions, including Don Juan in both English and French and as Fagin in Oliver!. More recently, in 2009 he played the main role of Macbeth in the play Macbeth, and the main role of Cyrano in Cyrano de Bergerac, and Lear in King Lear in 2014,[8] all performed at the Stratford Festival Theatre. He also has appeared on Broadway as Cassius in the production of Julius Caesar starring Denzel Washington as Brutus.[9] Off-Broadway, for the Public Theater, he was Claudius in a Hamlet production that starred Liev Schreiber.[10]

In Canada, Feore's most famous roles were as Prime Minister Pierre Trudeau in the critically acclaimed television mini-series Trudeau,[3] a role for which he won a Gemini Award for Best Performance by an Actor in a Leading Role in a Dramatic Program or Mini-Series, as classical pianist Glenn Gould in the 1993 film Thirty-Two Short Films About Glenn Gould,[3] and as by-the-book English Canadian detective Martin Ward in the box-office hit Bon Cop, Bad Cop.[3] He also played a crazed marketing executive imposter in the second season of the Canadian TV series, Slings and Arrows,[7] a role that continued for several episodes. The show has run in the United States on the Sundance Channel.

Outside Canada, Feore has appeared in numerous film, theatre and television roles. He is perhaps most famous in the United States for his supporting roles in such Hollywood films as Pearl Harbor, The Sum of All Fears, Paycheck,[3] and The Chronicles of Riddick.[7] In 1999, he appeared in Stephen King's Storm of the Century as the powerful ancient wizard Andre Linoge. He was the crooked Los Angeles Police Chief James E. Davis in 2008's Changeling.[8] In 2011, he appeared as Laufey, King of the Frost Giants, in the live-action superhero film Thor.[11] In 2014, he portrayed Dr. Francis Dulmacher in Gotham.[7] He portrayed the First Gentleman Henry Taylor on the seventh season of 24,[7] appeared as Tad Whitney in The West Wing second-season episode titled "Galileo" and played the billionaire suspect Jordan Hayes in the 2011 Law & Order: Special Victims Unit episode "Flight". He played murderers (by supernatural means) in two episodes of Friday the 13th: The Series.[12]

In 2013, he was made an Officer of the Order of Canada "for his contributions as an actor of the stage and screen, notably by bridging Anglophone and Francophone cultures as a fluently bilingual performer."[13] In October 2012, Feore was awarded an honorary doctorate degree by Wilfrid Laurier University in Waterloo, Ontario, in recognition of his contributions to Canadian theatre and film.[14] Feore was honoured with Gascon-Thomas Award from the National Theatre School of Canada in 2013, the award is given annually to an actor that makes an exceptional contribution to the growth of theatre.[6]

Feore is fluent in French. He has been married to Donna Feore, a choreographer and theatre director associated with the National Arts Centre and the Stratford Festival, since 1994.[15] They have three children: sons Jack and Thomas, and daughter Anna.[15]