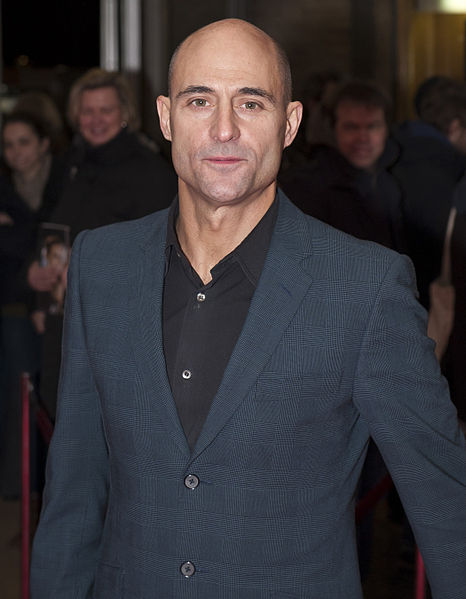 Mark Strong (born Marco Giuseppe Salussolia; 5 August 1963) is an English actor. He is known for his roles in films such as Stardust, RocknRolla, Body of Lies, Sherlock Holmes, Kick-Ass, Tinker Tailor Soldier Spy, Zero Dark Thirty, The Imitation Game, Kingsman: The Secret Service and its sequel Kingsman: The Golden Circle.

Strong was born Marco Giuseppe Salussolia on 5 August 1963 in Islington, London, the son of an Austrian mother and an Italian father.[1][2] His father left the family soon after his birth, and Strong was brought up by his mother, who worked as an au pair. Strong said in an interview, "The home I grew up in was a flat in Myddelton Square in London's Islington, a beautiful Georgian square with a huge church in the middle. We moved around a lot when I was a kid. I remember flats in Walthamstow, Clapton, Stoke Newington, and Edmonton."[3] As a child he wanted to become an actor because of French actor Alain Delon, later saying, "I remember watching him in films and though I couldn't understand a word he was saying I remember thinking he looked great. Failing that, an astronaut, after watching the moon landing on a tiny, portable, black-and-white TV at my gran's house."[3]

His English name is not a stage name; when he was a child, his mother changed his name by deed poll to help him fit in with his peers.[4] He was baptised a Catholic.[5] He attended Wymondham College, where he sang in the punk bands the Electric Hoax and Private Party (the name of the latter was based on the idea that the band's shows would not be attended, due to prospective audiences thinking that the event was a "private party").[6] His original ambition was to become a lawyer, but after studying German law at Ludwig Maximilian University of Munich for one year, he returned home to London[7] and studied English and Drama at Royal Holloway, and later attended the Bristol Old Vic Theatre School.

Strong at the Sherlock Holmes premiere in Berlin, 2010

Strong is a familiar face on British television. He appeared in two Prime Suspect serials for ITV as Inspector (later Detective Chief Superintendent) Larry Hall, in Prime Suspect 3 (1993) and Prime Suspect 6 (2003). He also had starring roles in two BBC Two drama serials, Our Friends in the North (1996) and The Long Firm (2004), for which he earned a BAFTA nomination. He also played the villainous Colonel Brand in Sharpe's Mission (1996). Strong portrayed the romantic lead, Mr. Knightley, in the 1996 ITV adaptation of Jane Austen's novel Emma. He then played the role of Steve in the 1997 film adaptation of Nick Hornby's Fever Pitch, opposite Colin Firth.

At the beginning of the 2000s, Strong appeared in Heartlands and in Shakespeare's Twelfth Night at the Donmar Warehouse, for which he was nominated for the 2003 Laurence Olivier Award for Best Performance in a Supporting Role. He was later featured in Roman Polanski's Oliver Twist (2005), played Mussawi in the film Syriana (2005), and played an assassin named Sorter in Revolver (2005). Strong portrayed the traitorous Wictred in Tristan & Isolde, showing his talent with swordplay, and since 2006, he has provided the narration in the BBC's genealogy series Who Do You Think You Are?.

In 2007, Strong was one of the final two actors considered for the part of Anton Chigurh in No Country for Old Men; despite the persistence of rumours, he claims he was never offered the part.[8] Strong was Pinbacker, the insane captain of Icarus I in Sunshine (2007). Also in 2007, Strong portrayed Prince Septimus, the youngest of the seven Stormhold princes, in Stardust.

In 2008, he played Nick Calderelli in Miss Pettigrew Lives for a Day, Mannie Miesel in Flashbacks of a Fool, Finn in Babylon A.D., Archy in RocknRolla, and Philipp Bouhler in Good. Also in 2008, he portrayed Hani Salaam, the Jordanian intelligence chief and director of the feared GID in Body of Lies, marking his first collaboration with English director Ridley Scott. Strong's performance as Hani Salaam earned him a nomination for the London Critics Circle Film Award for Best British Supporting Actor and his performance was mentioned by several critics, with Scott calling it "a marvel of exotic suavity and cool insinuation" while Ebert "particularly admired" his aura of suave control.[9] The following year, he played a lead part in the Channel 4 film Endgame,[10] and he played Lord Blackwood, the main villain, in Sherlock Holmes, who has somehow returned after his execution with a plot to take over the British Empire using an arsenal of dark arts and new technologies. The film marked his third time working with director Guy Ritchie.[11] He went on to work with Ridley Scott for a second time in the 2010 epic adventure film Robin Hood, portraying the antagonist Sir Godfrey. The same year, he played Frank D'Amico, the head of a criminal organisation, in Kick-Ass. Strong says he is drawn to playing the antagonist. He tries to "understand the purpose of the character", and then work on building a believable individual.[12]

In 2011, he played Thaal Sinestro, Green Lantern and Hal Jordan's mentor, in the superhero film Green Lantern.[13] Strong said the film "closely follows the early comics. Sinestro starts out as Hal Jordan's mentor, slightly suspicious and not sure of him because obviously Hal is the first human being who's made into a Green Lantern. He's certainly very strict and certainly unsure of the wisdom of Hal becoming a Green Lantern." Strong went on to state that the character "is a military guy but isn't immediately bad. It's the kind of person he is that lends himself to becoming bad over the course of the comics being written, but initially he's quite a heroic figure." He also revealed that the outfit and other aspects of the character very closely follow the character's early days.[14] Also in 2011, he was the voice Pod of The Secret World of Arrietty and the voice of the character Captain Titus of the Ultramarines Chapter in the video game Warhammer 40,000: Space Marine. The same year, and most notably, he played the role of Jim Prideaux in the film adaptation of Tinker Tailor Soldier Spy, which was earlier played by Ian Bannen in the iconic original 1979 BBC series starring Alec Guinness. The film premiered in competition at the 68th Venice International Film Festival on 5 September 2011.[15]

Strong then played Clive Cornell in The Guard (2011), which is the most successful independent Irish film of all time in terms of Irish box-office receipts, overtaking The Wind that Shakes the Barley (2006).[16] He next portrayed the role of Jacob Sternwood in the British thriller Welcome to the Punch.[17] He played Matai Shang, the leader of the Therns in John Carter (2012), and starred in Kathryn Bigelow's action thriller film Zero Dark Thirty (2012) alongside Jessica Chastain, Jason Clarke, and Joel Edgerton.[18][19] The film had its premiere in Los Angeles on 19 December 2012 and had its wide release on 11 January 2013.[20] The film received wide critical acclaim and was nominated for five Academy Awards, including Best Picture.[21]

In November 2012, Strong and Taissa Farmiga were cast as the lead characters John Washington and Anna Greene in Mindscape, produced by Jaume Collet-Serra, the feature-length directorial debut of Jorge Dorado.[22] The film centres on a man with the ability to enter people's memories who begins working on the case of a brilliant but problematic teenager to determine whether she is a sociopath or the victim of trauma. The film came to American cinemas in June 2014. Jaguar Cars produced an advertisement in 2014, initially shown during Super Bowl XLVIII and later online and on television, featuring Strong alongside fellow British actors Ben Kingsley and Tom Hiddleston. It was themed around their recent film roles as villains, and used the tagline "It's good to be bad".[23] That same year, Strong co-starred in the historical drama film The Imitation Game, alongside Benedict Cumberbatch and Keira Knightley, in which he played MI6 chief Stewart Menzies.[24]

In 2015, Strong won the Olivier Award for Best Actor for his role in A View from the Bridge, which he starred in as Eddie Carbone at the Young Vic. When Strong went over to perform the play on Broadway in New York, he received similar levels of acclaim, and was nominated for the Drama Desk Award for Outstanding Actor in a Play, and the Tony Award for Best Actor in a Play, for his performance. In 2016, he starred in the spy action comedy Grimsby,[25] about a British black-ops spy (Strong) whose idiotic brother (Sacha Baron Cohen) is an English football hooligan.[26] Also that year, he starred in a production of The Red Barn, by David Hare, which premiered in October 2016 at the National Theatre, (Lyttelton Stage), and co-starred in the political thriller film Miss Sloane, directed by John Madden.[27] The film premiered at the AFI Film Festival in November 2016.[28]

In 2018, he will star alongside Ethan Hawke and Noomi Rapace in hostage thriller Stockholm,[29] and will portray the villain Doctor Thaddeus Sivana in the superhero film Shazam! (2019).[30][31] In 2018 he starred in Fox network's Deep State, an espionage thriller in which he portrays an ex-spy named Max Easton, who after the death of his son, is brought out of retirement unwillingly, to avenge his death.

Strong continues to live in London. He said in October 2007, "I've got no desire to live anywhere else. I was born here, my wife was born here, my kids were born here and this is where we're going to stay. I feel like I have a lovely balance. I'm able to keep my head below the parapet. I get on with my work, I have a family and I get on the Tube. It just so happens that I'm doing this job."[32][33][34]

Strong speaks fluent German and some Italian.[35][36] He dubbed over Daniel Craig's voice in German when "German with an English accent" was required for the 1997 drama film Obsession.[37]

In an interview, Strong said that his style icon is David Bowie. He was named one of GQ's 50 best dressed British men in 2015.[38] He supports Arsenal FC.[3]