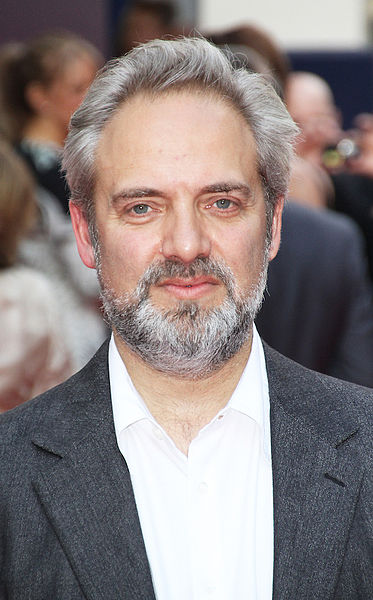 Samuel Alexander Mendes, CBE (born 1 August 1965),[2] is an English stage and film director best known for directing the drama film American Beauty (1999), which earned him the Academy Award and Golden Globe Award for Best Director, the crime film Road to Perdition (2002), and the James Bond films Skyfall (2012) and Spectre (2015).

In 2000 Mendes was appointed a Commander of the Order of the British Empire by Queen Elizabeth II for "services to drama" and in the same year was awarded the Shakespeare Prize by the Alfred Toepfer Foundation in Hamburg, Germany. In 2005, he received a lifetime achievement award from the Directors Guild of Great Britain.[3][4] In 2008 The Daily Telegraph ranked him number 15 in their list of the "100 most powerful people in British culture".[5]

Mendes was born in Reading, Berkshire, the only child of Valerie Helene (née Barnett), an author of children's books and Jameson Peter Mendes, a university professor.[2][6] His father, who is from Trinidad, is a Roman Catholic of Portuguese descent,[7][8][9] and his mother is an English Jew.[10] His grandfather was the Trinidadian writer Alfred Hubert Mendes.[6][7]

Mendes's parents divorced when he was a child. He grew up in Oxfordshire and attended Magdalen College School and Peterhouse, Cambridge, where he graduated with a first in English.[6][11][12] While at Cambridge, he was a member of the Marlowe Society and directed several plays, including a production of Cyrano de Bergerac with Tom Hollander among the cast members.[13] He was also a "brilliant" schoolboy cricketer, according to Wisden and played for Magdalen College School in 1983 and 1984.[14] He also played cricket for Cambridge University.[15]

Aged 24 Mendes directed a production of Chekhov's The Cherry Orchard in the West End that starred Judi Dench.[16] Soon he joined the Royal Shakespeare Company, where his productions, many of them featuring Simon Russell Beale, included Troilus and Cressida, Richard III and The Tempest.

He worked at the Chichester Festival Theatre in 1988 as assistant director on a number of productions, including Major Barbara, and directing in "The Tent", the second venue. He later directed at the Royal National Theatre, helming Edward Bond's The Sea, Jim Cartwright's The Rise and Fall of Little Voice, Harold Pinter's The Birthday Party, and Othello with Simon Russell Beale as Iago.

In 1990 Mendes was appointed artistic director of the Donmar Warehouse, a studio space in London's Covent Garden which he helped transform into one of the city's more notable theatre venues.[17] He spent his first two years overseeing the redesign of the theatre, and his opening production was Stephen Sondheim's Assassins in 1992.[17] Several successful productions followed.[17]

1994 saw Mendes stage a new production of Lionel Bart's Oliver!, produced by Cameron Mackintosh. Mendes, a longtime fan of the work, worked in close collaboration with Bart and other production team members, William David Brohn, Martin Koch and Anthony Ward, to create a fresh staging of the well-known classic. Bart added new musical material and Mendes updated the book slightly, while the orchestrations were radically rewritten to suit the show's cinematic feel. The cast included Jonathan Pryce (after much persuasion) as Fagin, Sally Dexter as Nancy, and Miles Anderson as Bill Sikes. Mendes, Pryce and Dexter received Olivier Award nominations for their work on Oliver!.[18]

He has also directed productions of Tennessee Williams' The Glass Menagerie, Stephen Sondheim's Company (which had the first ever African American Bobby), Alan Bennett's Habeas Corpus and his farewell duo of Chekhov's Uncle Vanya and Twelfth Night, which transferred to the Brooklyn Academy of Music.[17]

In 2003 Mendes directed a revival of the musical Gypsy. Originally, he planned to stage this production in London's West End with an eventual Broadway transfer, but when negotiations fell through, he brought it to New York. The cast included Bernadette Peters as Rose, Tammy Blanchard as Louise and John Dossett as Herbie. Mendes also directed the 2014 Olivier Award-nominated stage adaptation of Roald Dahl's Charlie and the Chocolate Factory.[19]

Mendes directed Jez Butterworth's The Ferryman for the Royal Court Theatre in London in 2017, of which he won an Olivier Award for best director.[20]

Mendes's second film, in 2002, was Road to Perdition, which grossed US$181 million. The aggregate review score on Rotten Tomatoes is currently 81%; critics praised Paul Newman for his performance. The film was nominated for six Academy Awards, including Best Supporting Actor, and won one for Best Cinematography.

In 2003 Mendes established Neal Street Productions, a film, television and theatre production company he would use to finance much of his later work. In 2005, Mendes directed the war film Jarhead, in association with his production company Neal Street Productions. The film received mixed reviews, with a Rotten Tomatoes rating of 61%, and a gross revenue of US$96.9 million worldwide. The film focused on the boredom and other psychological challenges of wartime.

In 2008 Mendes directed Revolutionary Road, starring his then-wife, Kate Winslet, along with Leonardo DiCaprio and Kathy Bates. In a January 2009 interview, Mendes commented, about directing his wife for the first time, "I would open my eyes in the morning and there Kate would be, going, 'Great! You're awake! Now let's talk about the second scene.'"[24] Mendes's comedy-drama Away We Go opened the 2009 Edinburgh International Film Festival. The film follows a couple (John Krasinski, Maya Rudolph) searching North America for the perfect community in which to settle down and start a family. The film was well received by critics but performed poorly at the box office.

In 2010 he co-produced a critically acclaimed documentary film Out of the Ashes that deals with cricket in Afghanistan.[25][26] In 2012 Neal Street Productions produced the first series of the BBC One drama series, Call the Midwife, following it with a second season which began transmission in early 2013.[27] In April 2016 he was named as the President of the Jury for the 73rd Venice International Film Festival.[28]

On 5 January 2010, news broke that Mendes was employed to direct the 23rd Eon Productions installment of the James Bond franchise.[29] The film, Skyfall, was subsequently released on 26 October 2012, to coincide with the 50th anniversary of the Bond films. Mendes had been employed as a consultant on the film when it was in pre-production, and had remained attached to the project during the financial troubles of MGM. The film was a major critical and commercial success, becoming the 14th film to gross over $1 billion worldwide.[30][31]

Following the success of Skyfall, Mendes was asked if he was returning to direct the next Bond film. He responded, "I felt I put everything I possibly could into this film and it was the Bond film I wanted to make. And if I felt I could do the same again, then absolutely I would consider doing another one. But it is a big task and I wouldn't do it unless I knew I could."[32]

It was reported that one reason Mendes was reluctant to commit was that one proposal involved making two films back-to-back, based on an idea by Skyfall writer John Logan, which would have resulted in Mendes and other creative personnel being tied up with filming for around four years.

It was reported in February 2013 that this idea had since been shelved[33] and that the next two films would be stand-alone. The same report claimed that Mendes was "75% on board, but was waiting to see the finished script before committing."[33] However, Mendes said in an interview with Empire Magazine in March 2013 that "It has been a very difficult decision not to accept Michael and Barbara's very generous offer to direct the next Bond movie." He cited, amongst other reasons, his commitments to the stage version of Charlie and the Chocolate Factory and King Lear.[34]

However, on 29 May 2013, it was reported that Mendes was back in negotiations with producers Wilson and Broccoli to direct the next Bond film,[35] going back on his previous comments.[22][36] Wilson and Broccoli were willing to postpone production of the film to ensure Mendes's participation. On 11 July 2013, it was announced that Mendes would direct the 24th James Bond film. Named Spectre, it was released in October 2015.[37] This made him the first filmmaker since John Glen to direct two Bond films in a row.

Mendes and the actress Kate Winslet met in 2001, when Mendes approached her about appearing in a play at the Donmar Warehouse Theatre, where he was then artistic director.[24] They married in May 2003, on what they characterised as a whim, while on holiday in Anguilla.[38] Their son Joe Alfie Winslet Mendes was born on 22 December 2003 in New York City.[38] Mendes also had a stepdaughter, Mia, from Winslet's first marriage to filmmaker Jim Threapleton.[38]

Mendes and Winslet's representative announced on 15 March 2010 that "they separated earlier this year". The couple were divorced in 2011.[38]

Report a problem
Write to Sam Mendes at FanPal • 2022